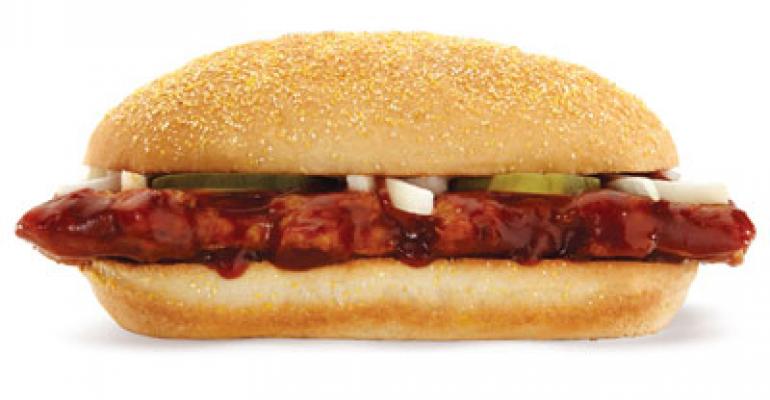 Since its introduction in 1981 as a limited-time offer, McDonald’s McRib sandwich has inspired fans to create songs, T-shirts and Facebook pages as a show of devotion, or to drive all night to McDonald’s units identified on a special McRib Locator. You’d think McDonald’s might want to keep an item like that on the menu.

But you’d be wrong. McDonald’s values making the McRib fans’ hearts grow fonder, so keeping it just out of their reach is key, said Rick Wion, director of social media and a confessed McRib fanatic, who oversaw the sandwich’s nationwide run on the menu last November, its first nationwide stint since 1994.

When leveraging the energy of a cult following, Wion said, it’s crucial to let the fans do the talking. McDonald’s “Legends of McRib” contest asked fans to share their stories of the iconic sandwich and gave the winner $10,000 and a free trip to Germany, the only place in the world where the McRib is available year-round.

When McDonald’s saw that the McRib was a hit at the start, why did it take the controlled-scarcity route rather than serve it permanently?

What we found quickly is that, in areas where it wasn’t completely available or went the regional route, whenever it went off the menu there was a natural buzz from customers. It’s been customer demand that’s caused us to bring it back, but what we found is that elusiveness itself drives that.

Fans go to extremes to show their love for the McRib. How do you harness that energy without it seeming like a contrived, corporate gimmick?

That’s why we take a very specific philosophy: Our fans sing the praises of the McRib, so we want to put their voices front and center. … That resonates tremendously. Fans are hearing it from other fans, and the corporate voice doesn’t get in the way.

The McRib drove a 4.9 percent comparable-store sales gain last November in the United States. Won’t that just pressure McDonald’s to bring the McRib back next year to exceed that comp?

Whenever we have strong sales like that, it just raises the bar to perform even better the next time around. But customer demand is going to be very important to bring the McRib back on a national scale. Regions always have the option to put it on their menus. As we look at the calendar for next year, we can’t say for sure what we’ll do.

What’s your legend of the McRib?

Well, I was a picky eater as a kid. My parents would make ribs on the grill, but it didn’t appeal to me until the first time I had a McRib. It was awesome, and I’ve been a fan for 20 years. I’ve driven way out of my way to get one. The first sign I saw for the McRib this time around, I immediately pulled over, took a picture with my BlackBerry and posted it to my Facebook page, and I got five “likes” right away.