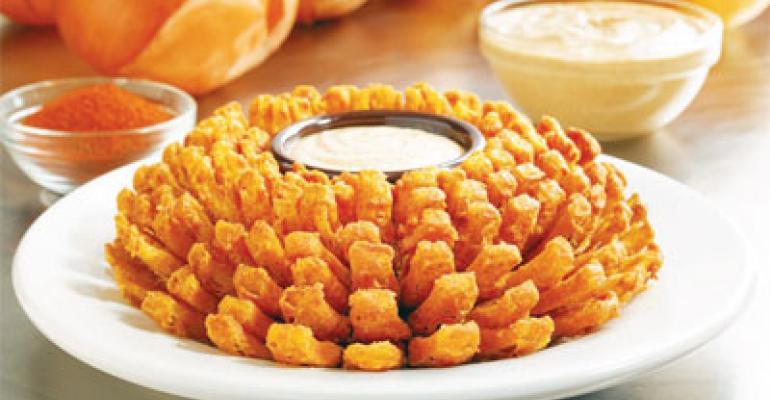 Few things can imprint a restaurant in the mind of the consumer like an easily identifiable signature dish.

Special menu items like Outback Steakhouse’s Bloomin’ Onion, McDonald’s Big Mac, Uno Chicago Grill’s deep dish pizza or Dairy Queen’s Blizzard often take on a life of their own and, as a result, can single-handedly drive traffic while helping an operation stand out from the competition.

Richard Coad, executive creative director for the QSR SWAT Team at Washington, D.C.-based MDB Communications, says the signature product not only cuts through the advertising clutter, it also helps its restaurant operationally.

“If you have a signature, it allows the company to focus on what its core product is,” said Coad, who is known for developing Subway’s long-running campaign starring Jared Fogle. “It’s the flagship for the majority of sales, so if you sell burgers, it’s good to have a Whopper. It also makes things easier internally and externally if your menu is focused like that.”

In the best of cases, the dish becomes interwoven in the brand’s identity and, to some degree, even in the collective culture.

One such household name is The Bloomin’ Onion, a longtime menu driver for Outback Steakhouse, which is a full onion that has been sliced so it flares out like a flower. It is battered, deep fried and served with dipping sauce, and sells for about $7.99 at some chain locations.

According to OSI Restaurant Partners, the Tampa, Fla.-based parent company of the Australian-themed steakhouse, Outback co-founder Tim Gannon came up with the Bloomin’ Onion after being inspired by Japanese cookbooks that featured vegetables prepared in intricate designs.

The company says it has sold more than 163 million Bloomin’ Onion appetizers since Outback opened its doors in 1988.

Featuring a signature dish in multiple locations across the country — and perhaps in other countries, as well — can be a challenge, and chains must be able to establish a fail-safe production process that ensures consistency.

Gannon consulted with the food science department at Texas A&M University to find the best onion breed. Today Outback uses suppliers that grow the Spanish colossal onions throughout the United States. The Spanish colossal, usually about 16 ounces and 4 ½-inches wide, is a genetic hybrid that has a smaller heart than a traditional onion.

At Fazoli’s, a major draw is the chain’s breadstick, according to Cathy Hull, chief marketing officer for the 226-unit quick-service pasta chain.

“They’re craveable, unlimited, and add value,” she said, adding that signature items can “sway consumers to pick one concept over another.”

She noted that the marketing team sees commentary to that effect on Twitter and elsewhere in the social networking world.

“People say things like: ‘Man, I’m craving Fazoli’s breadsticks. Gotta go.’ And I think it does help sway them toward our concept versus another on occasion,” she said. “That’s the beauty of having a staple on the menu that people relate to.”

But even when a signature item resonates well with guests, operators have the option to tweak it or offer alternative versions, which can breathe life into the product.

Dairy Queen, which began selling mini versions of its popular Blizzard item last year, operates a Blizzard fan club and maintains a blog with information and promotions for devotees of the shake-like treat.