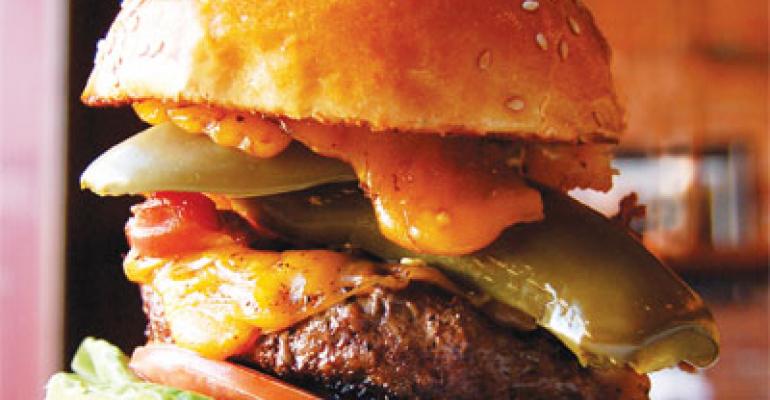 Eager to capitalize on the trend, restaurants put their best and boldest flavors between two buns

The better burger blitz also proved to be significant in that it influenced all sectors of the foodservice industry, from quick-service outlets to luxury restaurants and everywhere in between. High-end chefs like Charlie Palmer, Bobby Flay, Marcus Samuelsson and Hubert Keller all launched their own burger concepts, while quick-service brands like Wendy’s and Burger King fought back by rolling out new, more upscale offerings.

But as the field becomes increasingly crowded with better burger purveyors, players are now looking for ways to differentiate themselves from the pack.

One sure way, experts say, is to innovate — and to offer a damned good burger.

“It’s not a huge burger. But we’re using locally ground beef from a farm here in Boulder. It’s delicious. It’s a killer burger.”

Chefs at West End Tavern griddle the burgers and offer several variations. One is called the Deluxe, which is piled high with pastrami “so it’s a total cardiac special,” Query said.

“The chef is also always working with buffalo meat,” he continued. “We smother it with jalapeños and griddled onions and wild mushrooms that we get from Fort Collins, [Colo.]”

Another variation features cold-smoked short-rib meat served with a side of beer-cheese fondue, while another includes pickled jalapeños and smoked bacon.

“There is always a crazy chef-driven variation of the burger,” Query said. “We’ll serve hundreds of them a day.” Burgers are priced at $9.95 each.

At Radius, a stylish restaurant in Boston featuring Modern French cuisine, the burger is “an amazing draw,” said general manager Matt Karaban. While some refer to it as the Schlow Burger after its creator, executive chef and co-owner Michael Schlow, the staff simply calls it “The Burger.”

“At the moment, the burger is the ultimate comfort food for America,” Karaban said. “You see them on TV. You have competitions. It’s just something people can always count on. All the big restaurants in Boston now offer a burger. It’s their burger; it’s their creation. It’s very dependable — if you want to come in on a cold day or get a burger at the bar at night, it’s just satisfying.”

Not everyone, however, is bullish on the current burger boom. Jeremy Merrin, the owner of Havana Central in New York, serves a trio of popular burgers but believes that the white-hot trend can’t last.

“A lot of us in the restaurant business feel that the burger thing is a bubble, and that the bubble is going to burst sooner or later — like a lot of these trends do when something becomes very hot, and a lot of people go into the space,” he said.

“There is no way that the number of pure burger places out there [is] going to be able to last in the marketplace,” he said. “The marketplace is clearly over-saturated. So many big names have gone into the business now, and since a lot of them are significant brands, there is going to be a real battle, a real shakeout.

“I don’t know if it’s going to be the best burger that shakes out or the cheapest.”