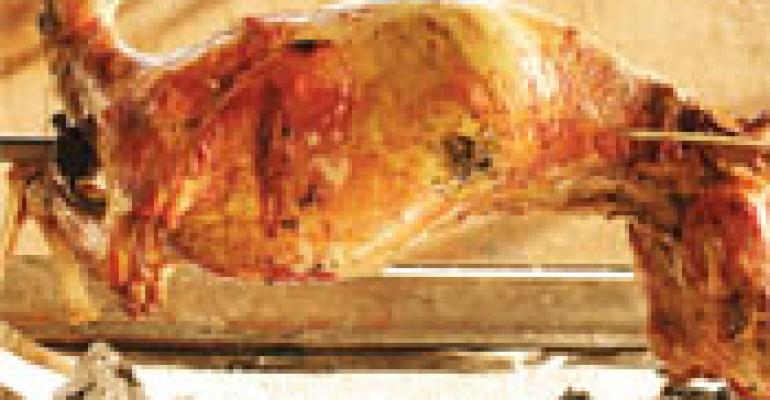 Sometimes, as the saying goes, “the more things change, the more they stay the same.” That seems to be the case with the daily special, a fixture of restaurants for as long as anyone can recall.

Alive and well and evidence of operators’ ingenuity and resilience through times both good and bad, specials are served today in many of the same ways that they have for centuries while evolving into a marketing tool.

Historically, specials have played many roles, and they actually preceded printed menus, says foodservice consulting firm principal Tom Miner of Technomic Inc. Today they’ve become a staple of the industry, “a standard practice and a major component of restaurant merchandising.”

In the 17th century, verbal specials were whatever the innkeeper’s wife had left over in the kitchen. During the Colonial era in New York City, the fleet would come in after turtle hunting, and restaurants and taverns served turtle “specials,” or maybe shad roe, as various species moved up the Hudson River in the spring, he says.

“Specials were part of the bounty of the American landscape,” Miner says. “Flash forward a few hundred years and you have specials that reflect today’s interest in sustainable, natural, local foods. Or when ingredient prices spike, and your menu has chicken dishes that had a 30-percent food cost when it was printed but are now 35 or 40 percent, you might compete against those with specials—sell away from your menu to make better margins.”

The downside comes, he adds, when an operator is selling more than 50 percent of total volume from specials because that indicates that the regular menu is weak.

Today, specials cut across the industry’s segments from fine dining to quick service. They’ve evolved, says consultant Dennis Lombardi of WD Partners in Columbus, Ohio, into a marketing tool, allowing chains to drive traffic, or as a way to use bargain-priced or seasonal products, or to differentiate themselves.

Today quick-service restaurants and casual-dining operations promote “value-positioned specials,” such as the 99-cent double cheeseburger, to bring in customers who may then order more or switch to more expensive items.

Many chains use limited-time offers to test and evaluate new menu items, Lombardi adds, and “some become recurring specials like McDonald’s McRib.”

Outback Steakhouse introduced specials last year with its “No Worries Wednesday” mixed grill promotion that “expand on the variety of our menu, and they’re doing great—our projections were right in alignment with our targets,” says president Jeff Smith. The chain began doing two daily specials last fall and is expanding that to three.

“Specials are good for driving in business,” says Nancy Edgerton, vice president of marketing at La Senorita, a 28-year-old, six-unit Mexican chain in Traverse City, Mich. “They also offer a nice price point for our regulars. We always have something that’s not on our regular menu, because people are always looking to get something of value at a reasonable price.”

In addition to daily specials, on Sundays, children aged 12 and under eat for 99 cents, and the chain also has senior specials. During the holidays, customers who buy an $8.95 entrée get free deep-fried ice cream or peanut butter pie.

Executive chef Steve Rosen at the 120-seat Octagon restaurant in the Mystic Marriott Hotel & Spa in Groton, Conn., takes “a lot of pride in the specials” he offers.

“Many people see them as a way to use up excess product,” he says. “We bring stuff in for our monthly specials, local ingredients like Vermont quail or rabbit or New Hampshire venison. We create dishes around them.”

He sometimes uses specials to test new items, using guest response to help determine whether to add them.

The downside can be if a special fails to sell. When that happens, Rosen says, he may try the item as an appetizer instead.

“If we brought in wild rabbit and it didn’t sell, we might use it in a game ragú,” he says.

Jeff Tunks, chef and partner in four Washington, D.C. dinnerhouses, sees specials as “a good way to keep our thumb on the pulse of what’s going on.”

At Ten Penh, his Asian-theme restaurant, Tunks has introduced a “blue plate bento box” with a different Asian fare each day.

“People will come especially for a certain day like the Thai Bento box on Friday,” he says. “It sells out pretty much.”

“Sometimes we’re able to get real seasonal products but they’re not steady enough for the regular menu so we use them for specials,” he says. “It stirs the waitstaff and excites them to promote them, and it’s a good way to help offset food costs. If my seafood guy has a pallet of wild fresh bass that he wants to move at a good price, we can run it as a special and make a profit. We keep them moderately priced.”

“They help us get our training wheels,” he says.

For a multiconcept operator such as Lettuce Entertain You Enterprises in Chicago, specials create excitement among not only guests but also cooks and servers by “taking advantage of the seasonality of certain foods that you associate with a particular time of year,” says executive vice president Marc Jacobs.

LEYE does specials with seasonal items like asparagus or halibut in the spring, he adds. In the winter, the company’s R.J. Grunts records the temperature each morning at 11:30 and prices the two soups on the salad bar accordingly.

Pitfalls of using specials, he observes, can be when servers fail to mention them and they aren’t sold.

“A lot of people rely on the service staff to guide them through the menu,” he says.

It’s important, he adds, not to have too many specials or to run the same ones too often so that they become “un-special.”

The items should be “a good value,” he says. “You want to sell out every day.”

Aaron Johnson, an owner of the 100-seat Town Talk Diner in Minneapolis, agrees. Specials, both on the menu and at the bar, keep everyone from the staff to the guests excited, he says.

“You get bored if the menu doesn’t change. Guests’ palates and expectations have changed a lot. We have a lot of people who come in at least twice a week for dinner. Our standard fare is comfort food, so specials let us keep an edge on our creativity and use products we don’t have to have on the regular menu. They let us stretch the boundaries. You can rotate them and they keep things really fresh.”

In-store point-of-purchase materials and blackboards promote them to customers, as do e-mail blasts.

At Paley’s Place Bistro & Bar in Portland, Ore., customers come each Friday for the whole suckling lamb special from a local farm, spit-roasted over fruitwoods and mesquite.

On a daily basis, the restaurant does soup and fish specials, says chef-owner Vitaly Paley, whose 50-seat restaurant features local, organic foods of the Pacific Northwest with Italian and French influences.

Specials are a “way to use products that you can only get in small quantities,” he says. “They help us stay in tune with what’s happening and get creative daily.”