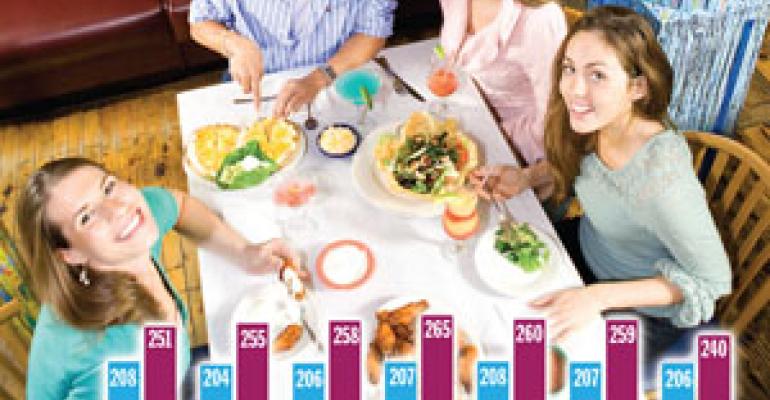 If restaurant operators were to sing about their troubles, perhaps they might start with a modified rendition of a classic Pete Seeger tune—“Where have all the young people gone?”

According to new data from market research firm The NPD Group, young adults have been cutting back steadily on restaurant visits for several years now. A tough economy has been playing a role in the cutbacks, but other, potentially longer-lasting factors also are driving the shift, and operators need to be aware of them, say officials at Port Washington, N.Y.-based NPD.

Those cutbacks surely have hurt, considering this relatively small portion of the population spends a huge amount of money at restaurants. For the 12 months ended in June, young adults aged 18 to 24 spent $42 billion at restaurants. More than two-thirds of their visits were to quick-service operations.

“The two categories you would expect them not to give up is where the declines are steepest: hamburger and pizza,” she said.

While the weakness is widespread, this age group continues to patronize a number of concepts, most of which tend to have higher check averages, NPD found. Gourmet coffee and tea shops are high on young adults’ list of places to visit. This group also is continuing to visit bakery and sandwich concepts, fast-casual outlets, bagel shops, and mid-scale Italian and casual-dining pizza places. In addition, young adults are heavy users of supermarkets for prepared foods, another category they have not cut back on, Riggs noted.

“It’s not like they’re trading down,” Riggs said. “They either traded out or found other options in QSR.”

Not only are they cutting back on visits to restaurants that previous generations of young adults frequented in favor of more costly options, but today’s young consumers also indicate they might be doing so because of a desire for healthy or light fare, NPD found. For those who say they want healthy or light fare when they visit restaurants, 18-to-24-year-olds are growing at a faster rate than any other group, according to NPD.

While the NPD data clearly point to drivers beyond those that are financial, some operators say it’s not so black and white.

“I think it’s probably a combination of change in behavior, a desire for particular products and value,” said Brad Stevens, Starbucks’ vice president of customer relationship management, discussing the reasons that young adults are heading for Starbucks and away from other quick-service concepts.

While Starbucks has a broad customer base and doesn’t specifically target any particular demographic group, some of the chain’s value programs are particularly appealing to young people, Stevens said. For example, he pointed to the Starbucks Card Rewards, a loyalty program that gives members benefits such as free refills and complimentary customization, and the recently launched Treat Receipt, which gives consumers a cold grande beverage for just $2 after 2 p.m. with a stamped a.m. purchase receipt. Though not created specifically for young customers, many of Starbucks’ better-for-you products—such as the new Viviano, a smoothie product “geared toward a more healthy lifestyle”—are likely to be attractive to this group as well, he added.

“The real appeal of Starbucks is the environment and how welcoming it is,” Stevens said. “[Young people] feel they can come in, relax and use it as a meeting place.”

“[Young] people are primarily price-driven, heavy fast-food consumers,” Haley said. “If there’s any shift in the marketplace, a vast majority is due to the economy, not a [change in behavior].”

Despite the risk of losing some 18-to-24-year-olds who might need to spend less in tough times, Carl’s Jr. has done little discounting. Instead, Haley said the chain has opted to stay the course and “stay true to what we do: premium burgers.”

The chain also has chosen not to add any new better-for-you menu items, given that the ones it long has had on the menu haven’t been big sellers despite numerous marketing efforts, Haley said. The strategy seems to be paying off, as the 1,162-unit burger chain recently reported its tenth consecutive quarter of positive same-store-sales increases.

“Some chains are trying to be all things to all people,” Haley said. “For [regional] chains like us, we really need to be focused. We’ve chosen our [focus] to be premium-quality, great-tasting burgers.”

“We actually identified that we had to get a better foothold on the group,” said Subway director of brand development Michelle Cordial, explaining the chain’s reason for the targeted promotions. “We increased visitation among young men specifically [during each promotion].”

In addition, the chain’s value-based $5 foot-long sandwich promotion, launched earlier this year, has increased visitation from all demographic groups, Cordial said. “We believe that they are balancing their choices—maybe they are mixing it up a bit more,” Cordial said, discussing the reasons that young consumers might be visiting a variety of concepts. “[At Subway], they can get healthy and indulgent options.”

The changing preferences of this core consumer group might not have trickled down to all restaurants yet, but eventually they will impact the entire industry in some way, experts say.

“Following the trends of young adults is key to attracting their business,” Riggs said. “By understanding the behavior and attitudes of those [aged] 18 to 24, restaurant operators and their suppliers will be better equipped to offer meals and snacks that satisfy the taste and eating preferences of this key demographic group.”