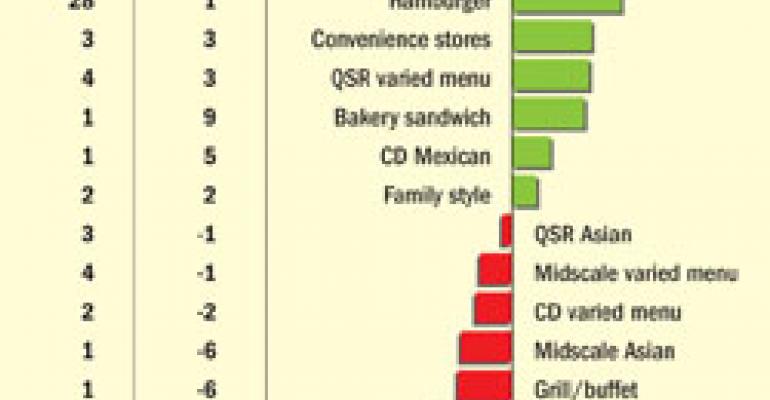 The three-martini lunch, the power lunch and, most recently, the working lunch have each packed restaurants or takeout spots during midday at one time or another. Now, however, operators are increasingly facing a less lucrative trend: the nolunch lunch.

According to The NPD Group, the number of lunch visits to restaurants has been slowing for several years and recently came to a virtual standstill. Total restaurant lunch traffic was flat in the year ended October 2007, compared with a year ago, according to the Port Washington, N.Y.-based market research firm.

NPD attributes the lack of growth to a stagnation of business at quick-service outlets, which account for nearly 80 percent of traffic during the lunch daypart. During the same period, casual-dining restaurants realized a modest lift in guest counts. Meanwhile, traffic at midscale restaurants continued trending downward for the third year in a row.

“Considering that over a third of all commercial foodservice traffic takes place at the lunch meal occasion and accounts for over 20 billion visits, these trends are disconcerting to say the least,” said NPD analyst Bonnie Riggs. “The lack of growth at the midday meal is largely the result of consumers ordering fewer meals from restaurants to eat at work.”

According to NPD, the decline in per-capita restaurant lunch visits was particularly evident among consumers aged 25 to 49, the heaviest users of the daypart and those most likely to be in the workforce.

“It’s not clear what’s forcing consumers to cut back on doing lunch, though it could be a convenience thing,” Riggs said. “[Consumers] are working more hours, not even going out for lunch, or working through lunch.”

More consumers are cutting back the old-school way—they are brown-bagging it. According to NPD’s National Eating Trends data, 11 percent of all lunch meals are carried from home, and that number is up from a year earlier.

Other consumers are making even more drastic cutbacks and are skipping lunch altogether. According to the Eating Trends data, 15 percent of all lunch meals were skipped in the year ended February 2007.

Whether because of shrinking lunch hours or an obsession with multitasking, consumers also are doing more “dashboard” dining than in previous years, NPD found. In 2007, 14 percent of all restaurant lunch meals were eaten in the car, an increase of 4 percent over the prior year.

Although external pressures, both social and economic, are having an impact on consumers’ lunchtime visit patterns to restaurants, not all restaurants saw lunch business fall off.

Operators such as Arby’s, Chick-fil-A and Subway, considered “other sandwich” by NPD, captured a 10-percent share of all lunch traffic and posted the largest incremental traffic gains last year. In the year ended October 2007, other-sandwich lunch traffic increased 3 percent.

Although several other categories, including gourmet coffee and tea, casual-dining bar and grill, and convenience stores also performed fairly well at lunch, they do not capture a major portion of lunch traffic, NPD said. Hamburger restaurants, which historically capture nearly 30 percent of all lunch visits, just barely managed to grab their share of visits.

“We are forging new territories, going where consumers are,” Subway spokesman Les Winograd said of the chain’s aggressive expansion strategy.

“We know that business is strong,” he said. “It’s not just the food. … You want them to be happy with [the] experience.”

Philadelphia-based Aramark is among the large contract foodservice companies that have seized the opportunity and experienced an increase in lunch traffic in the last two years.

“We’re seeing across the board good upticks in check averages and number of guests per day and per meal period,” said Marc Bruno, regional vice president of Aramark business services. “It really revolves around convenience and healthy options.”

Bruno attributes the increases to Aramark’s rollout of a new Market Fresh concept to many of the company’s corporate accounts. A retail-like experience, the concept provides diners a variety of customized, made-to-order dishes as well as numerous grab-and-go options like miniature sandwiches, packaged combo meals and 500-calorie meals.

“What our cafes are doing is much more appealing for consumers to stay in,” Bruno said. “[Consumers] get a healthier, better-tasting meal that’s convenient and quicker at a much-reduced price.”

To get consumers eating lunch again, Riggs suggests operators try turning more of their attention to the midday meal.

“A lot of promotions and ads have been focused on snacks and breakfast,” she said. “We’ve not seen a lot of marketing initiatives to the lunch meal. Not a lot of new product news. … New products do drive traffic.”

Operators could also take a cue from New York City’s Michael’s restaurant, one of the few places where the power lunch is still alive and well.

“Business has been increasing for the last four years,” said Steve Millington, Michael’s general manager. “2007 was a banner year for our lunch.”

While Michael’s caters to business leaders who can easily afford the restaurant’s average lunch check of $48 per person, what keeps them coming back, Millington said, is the restaurant’s commitment to exceptional customer service. The restaurant keeps meticulous notes on its regulars, including detailed information such as whether they prefer a drink with or without ice or mixed greens to iceberg lettuce. It’s also important not to take success, however hard-earned, for granted, Millington added.

“I wake up every day and say this could be our last big lunch,” Millington said. “It’s a very tenuous and careful thing.”