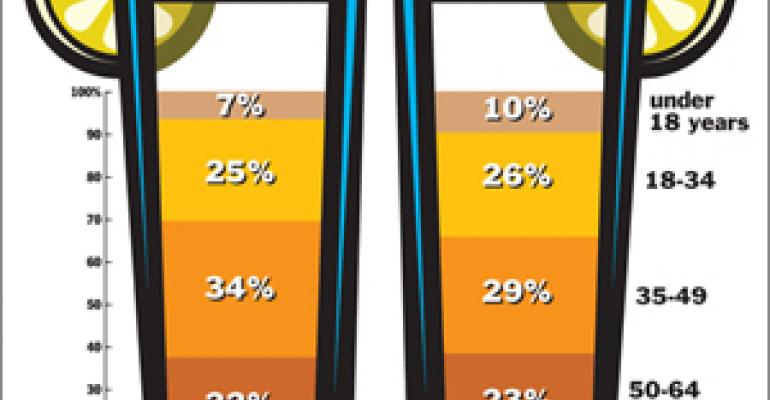 Look out, fizzy drinks—noncarbonated beverages are bursting your bubble as consumers increasingly quench their thirst with such libations as iced tea, bottled water and lemonade.

According to new data from The NPD Group, a Port Washington, N.Y.-based global market research firm, growth was flat for regular carbonated soft drinks in the year ended in November 2006, while a number of noncarbonated beverages experienced double-digit growth.

In addition to the availability of a wider array of alternative beverages, such as specialty coffee, bottled water, noncarbonated soft drinks and iced tea, NPD also attributes the shift to consumers’ concerns about health and an interest in trying something new.

While traditional coffee had taken a back seat to specialty coffee for several years, it’s making a comeback. According to NPD data, servings of traditional coffee were up 3 percent over last year, and 7.4 percent of all restaurant meals and snacks included a cup of basic joe.

The turnaround in coffee consumption has generated a lot of buzz, but it’s not the only beverage consumers are drinking up. Bottled water and noncarbonated soft drinks, such as lemonade, energy sports drinks and fruit punch, also have seen dramatic increases in the past year. According to the data, servings of bottled water were up 10 percent, and bottled water was served with 4.2 percent of all restaurant meals and snacks. Servings of noncarbonated soft drinks were up 7 percent, and such beverages were served at 4.2 percent of all meals and snacks.

“The growth in bottled water is just unbelievable,” Riggs said. “There were 225 million more servings [in 2006] than the previous year.”

But the beverage seeing the biggest growth next to coffee is iced tea. While iced tea servings were up just 3 percent from the prior year and the iced brew is served with 7.4 percent of all restaurant meals and snacks in the year ended in November 2006, similar to coffee, the number of servings of iced tea has increased 12 percent in the five-year span from November 2001 to November 2006. The data also reveal that iced tea has 37 percent of the beverage market share, the same as traditional coffee. Specialty coffee has 19 percent and hot tea just 6 percent.

“There’s really been a resurgence in iced tea,” Riggs said. “I think people don’t realize how big it is—and growing.”

Iced tea not only appeals to a broad range of consumers, but to multiple restaurant segments. Unlike coffee, which NPD’s data reveal traces entirely to the quick-service segment, iced tea has increased in popularity at both quick-service and casual-dining restaurants.

Among the casual-dining chains having success with iced tea is Plano, Texas-based Bennigan’s Grill and Tavern. Last summer the 270-unit chain rolled out a new beverage menu that has led to beverage-sales increases for eight consecutive months, according to officials. Among the menu items driving sales are flavored iced teas, which the chain says account for 24 percent of its nonalcoholic beverage sales and nearly 10 percent of its total beverage sales.

Maryville, Tenn.-based Ruby Tuesday Inc. reports that sales are up more than 10 percent in the past year in all of its beverage categories. However, the chain says its Zero Proof menu, which was launched last summer and features a variety of nonalcoholic, noncarbonated beverages, such as bottled water, smoothies, juices, lemonade and iced tea, has gained real momentum in the past six months.

“There are a lot of people who eat out who don’t want a typical soda,” said Rick Johnson, senior vice president of Ruby Tuesday.

Topping the list of best-selling items on the Zero Proof menu are the chain’s flavored iced teas, which are available in such flavors as mango, cherry, passion fruit and blackberry. Other options will be unveiled this spring, Johnson said.

Seattle-based Starbucks Corp. discovered the benefits of iced tea back in 2003 when it first began offering its Shaken Black and Shaken Passion varieties. The success of those products prompted the chain to roll-out Shaken Green iced tea in 2005. Today, customers can choose from the black, passion and green iced teas as well as order iced versions of any of the chain’s eight Tazo bagged teas.

“Tea in general is the smallest [part of our business], but it’s the fastest growing,” said Megan Marine, Starbuck’s category manager for espresso and tea.

Beverages have always been big at Oklahoma City-based Sonic, where customers can order carbonated soft drinks, lemonade and sports drinks, or combine multiple beverages to create a customized drink. According to the chain, there are more than 168,894 possible combinations.

But it was just last summer that the 3,224-unit quick-service chain began banking on the possibilities of tea, with the addition of two new iced teas, fresh-brewed peach and raspberry.

While some chains have discovered the power of iced tea, many have not.

“There’s a lot of variety and versatility in the product that a lot of operators have not taken advantage of,” Riggs said.

She noted that iced tea is a huge opportunity for restaurant operators—especially in the quick-service segment—given the product’s interesting flavor profiles and the perceived calming and health benefits of tea. She also suggested that iced tea offers an opportunity for operators to tap into the changing beverage preferences of teens, with whom iced tea has become considerably more popular. And, she added, so far iced tea has fared well with little marketing effort.