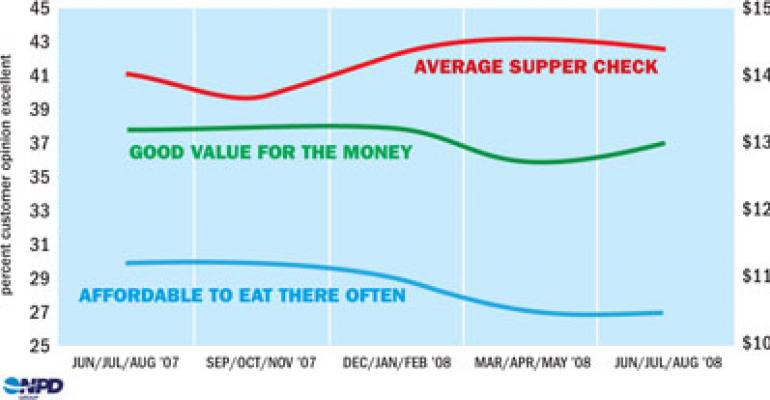 Everybody has their price, and it would seem that phrase has never been truer for customers of casual-dining and midscale restaurants.

Consumers say they are largely dissatisfied with the price-value equation for dinner meals at casual-dining and midscale operations, according to new data from The NPD Group. However, there is a price point at which they say they are most satisfied and that inspires them to make repeat visits.

With dinner visits to restaurants in those segments lagging behind total industry traffic, operators must offer and promote more meals that fall into that pricing sweet spot, say officials at the Port Washington, N.Y.-based market research firm.

“If [operators] can manage to stay in that sweet spot, not only will [they] make [customers] happier, but [they are] more likely to get repeat business,” said Bonnie Riggs, an NPD analyst. “This is where [operators] have to play right now if [they] want to drive traffic.”

“Midscale and casual dining continue to experience weakness at supper,” Riggs said. “It’s particularly disconcerting as they have such a heavy dependence on that daypart.”

When it comes to dining out, there is a direct correlation these days between rising prices and consumer satisfaction ratings, NPD found. In the NPD study, consumers’ full-service dinner value and affordability ratings declined with the rising cost of the meal.

As the average cost of a dinner at midscale restaurants rose above the $9 mark in the beginning of the year, satisfaction rates as they relate to “good value for the money” and “affordable to eat there often” began to fall off.

A similar shift occurred at the casual-dining segment. According to the data, once the average cost of dinner exceeded $13, satisfaction rates among customers—particularly the “affordable to eat there often” response—began to slip.

While consumers weren’t happy spending more than $9 for a midscale dinner or $13 for a casual-dining dinner, there was a “sweet spot” within both segments with which consumers were most satisfied, NPD reported.

In terms of affordability, good value and revisit intent, consumers said they were most satisfied when they paid between $6 and $10 for dinner at a midscale restaurant. Approximately 32 percent of all midscale visits at dinner fall in the $6 to $10 range. The remaining visits—more than 60 percent—fall outside of where consumers are most satisfied with price and value and are most likely to revisit.

Though the entire industry has experienced weakness in the dinner daypart, midscale has been considerably weaker than other segments. One reason may be that the price disparity between a dinner meal at a midscale restaurant and one at casual-dining operation is similar, but the experience is not, Riggs noted.

“The quality of food, service—all of the things that make up the value equation—[at midscale restaurants] don’t seem to be as good as what you can get at casual dining, and you’re still paying a pretty high price,” said Riggs, commenting on why the segment has been hit so hard. “If midscale operators want to drive traffic, they are going to have to stay in that sweet spot.”

Economically squeezed from all ends, consumers are evaluating how they spend every dollar and are more aware of other dinner options, such as similarly priced ready-to-eat foods available at supermarkets and other retail outlets, industry experts say. When they do eat at full-service restaurants, consumers are finding ways to reduce their checks and are looking for concepts that fall into that sweet spot, Riggs says.

For example, as gasoline prices soared to record levels earlier this year, consumers turned to concepts that offered a strong value proposition—not necessarily the cheapest price, but the best price-value equation, according to NPD. This was particularly evident at midscale and casual-dining restaurants as they struggled to compete with the lower-priced offerings of the quick-service segment.

Though some experts believe the decline in restaurant dinner traffic goes beyond cyclical economic factors and is instead a long-term behavior shift, Riggs said opportunities to increase dinner traffic for these segments still exist.

“You don’t have to make it a negative; you could change that behavior to the positive side,” Riggs said. “[It’s an] opportunity for casual-dining operators. Midscale [is] really going to have to make some changes.”

In an effort to get more fannies in seats amid what can best be described as an extended slump, casual-dining operators are pulling out all of the stops. Chains ranging from Buffalo Wild Wings to California Pizza Kitchen have introduced everything from new loyalty programs to increased limited-time offers to beefed-up marketing campaigns.

Among those that have recognized the power of the right price is T.G.I. Friday’s. In October, the Carrolton, Texas-based chain reduced the starting price of its already highly successful “Right Price, Right Portion” menu, positioning it squarely in the NPD sweet spot.

“T.G.I. Friday’s ‘Right Portion, Right Price’ menu has always been based on choice and value,” Andrew Jordan, senior vice president of marketing for T.G.I. Friday’s USA, said in a statement. “Today’s consumer is seeking value more than ever, and with 10 entrées priced from $5.99 to $9.99, our guests will find it only at T.G.I. Friday’s.”

Yet other chains, such as Lebanon, Tenn.-based Cracker Barrel, are just holding the line, doing what they have always done in the hopes that when the economy picks back up so will their dinner business.

“We continue to focus on offering honest value, high quality, excellent service and warm hospitality, the things that our guests expect from a visit to Cracker Barrel,” said Cracker Barrel spokeswoman Julie Davis.

Less dependent on dinner than their casual-dining competition, some midscale and family-dining chains are taking an entirely different approach to the traffic reduction at the evening meal.

With 10-percent less traffic at dinner versus a year ago and severely squeezed margins, Denny’s is shifting the focus away from the evening meal. Instead of putting all its energy into the troubled daypart, the Spartanburg, S.C.-based family-dining chain said it is focusing on what it does best—breakfast and late night.

“People just aren’t going anywhere,” said Denny’s chief executive Nelson Marchioli. “They have opted out of dinner more than any other daypart. I don’t want to chase dinner to the point of ridiculousness.”

Though Denny’s is doing more to drive traffic at breakfast and dinner, such as using its media buys only for these dayparts, the chain has made efforts to lure existing customers to dinner, Marchioli said. Those efforts include a variety of in-house promoted meal deals priced at $8.99 and $9.99, the high end of the NPD sweet spot. In addition, the chain plans to roll out several new value-based dinner offers in the first quarter of 2009.

“I think it is about focus,” Marchioli said. “We’re all talking about value in the industry. It’s three things—it’s price, price, price.”

However, once you’ve nailed the right price, you can’t forget about service, he said.

“[In this economic climate,] the last thing consumers want to do is take a chance,” Marchioli said. “You’d better deliver awesome service with that value, otherwise they’re not coming back.”