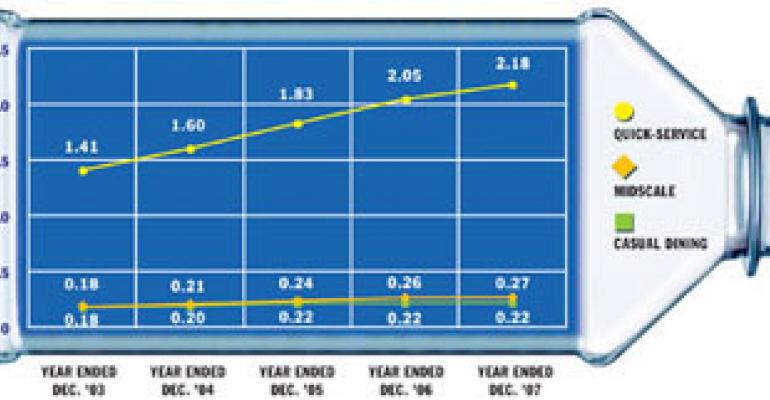 While environmental concerns, the slowing economy and bad press all have taken a toll on bottled-water servings at restaurants, the well of opportunity for the high-profit product is not dry, according to the NPD Group.

Given its portability, perception of healthfulness and a growing variety of flavors, bottled water remains a popular menu item, said Bonnie Riggs, an NPD analyst.

“While the growth has slowed for bottled water, it’s still very important to [consumers],” Riggs said.

Riggs attributes slowed growth in bottled-water servings to concerns about waste and the energy-related costs of shipping imported water, a growing belief that bottled water is no better than tap water, proposed tax increases on the product, and growing cost-consciousness among consumers.

The bad press bottled water received last summer “had an immediate impact,” she said. “[Operators] have to find other ways of going up against this trend.”

Also, while consumers wary of an economic slowdown have cut back on nearly all types of add-ons when they order, including beverages, side dishes and desserts, bottled water was one of the few add-ons that did not decline in the most recent year, NPD found.

The slowed but continuing growth of bottled water is tied to more points of distribution, including more chain operators adding it to their menus, experts said. Quick service, which accounts for more than 80 percent of the bottled-water market in commercial foodservice, is driving the growth. In the year ended December 2007, there were roughly 2.2 billion servings of bottled water at quick-service operations, up 6 percent from 2006.

While other segments account for just a fraction of the bottled-water market, some innovative table-service operators are trying to tap the revenue stream by offering “house-bottled” waters. For example, at Grace in Los Angeles and BLD in New York chef-restaurateur Neal Fraser has been serving tap water that that has been filtered through a complex reverse-osmosis system. For customers who prefer sparkling water, the restaurant also has the ability to add carbonation.

Industry experts anticipate that servings of bottled water will continue to grow in all restaurant segments.

“Bottled water is huge now,” said John Rodwan, editorial director for Beverage Marketing Corporation, a New York City-based consulting firm. “It’s bigger than beer. Beverage Marketing does expect it to continue to grow…but it would be hard to go back to double-digit growth.”

The time of day when bottled water is purchased hints at consumers’ desire to have convenient beverages on hand, NPD found.

“[Many consumers are] purchasing two beverages a lot of times…getting coffee and grabbing a bottle of water for sometime later in the day,” Riggs said. “That’s something operators could market to.”

Variety abounds when it comes to bottled-water products, said officials at the Alexandria, Va.-based International Bottled Water Association, who point to a long list of options that range from domestic and imported spring and sparkling waters to flavored or nutrient-enhanced waters.

While beverages such as bottled water can be good revenue generators, they have to be watched closely as they may be products that consumers cut back on when their wallets really get squeezed, Riggs said.

“Operators may need to re-think pricing strategy when it comes to bottled water,” she said. “Why pay $2 from a restaurant when [you] can buy a case from retail for $4?”

At the same time operators should be wary of over-thinking their approach to bottled water, said Bill Marvin, a foodservice consultant known as the “Restaurant Doctor.”

“Anything you do ought to have a story behind it…where it came from, characteristics,” Marvin said of how to best market bottled water. “You want things [on your menu] with talking power.”