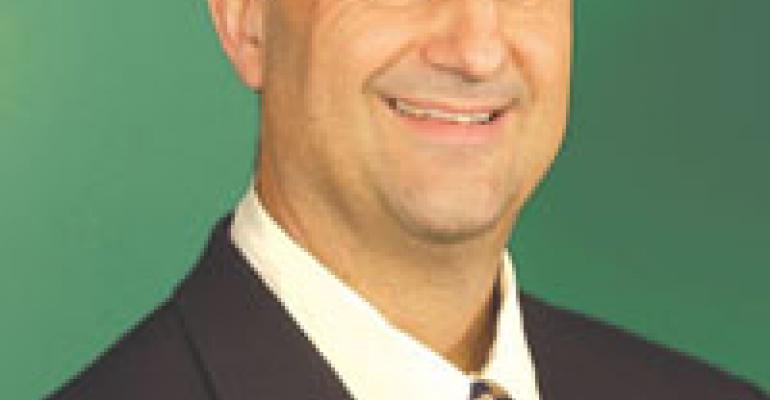 Saying the name “Beef ‘O’ Brady’s” sends the imagination wandering into the cozy climes of an Irish pub. Doing the same with “Nick Vojnovic” doesn’t produce quite the same effect.

As president of Family Sports Concepts Inc., the Tampa, Fla.-based franchisor of the 230-unit Beef ‘O’ Brady’s chain, the 48-year-old Vojnovic is as spirited, energetic and friendly as a stereotypical Irishman. But no one would ever mistake the black-haired and dark-eyed son of Yugoslavian immigrants for a Dubliner.

Not that anyone—shareholders and customers included—really cares, because Vojnovic appears to have the luck of the Irish when it comes to leading Beef ‘O’ Brady’s. The “family sports pub” chain is enjoying a growth spurt throughout the eastern United States when many of its casual-dining peers are struggling. His colleagues say few people other than Vojnovic could lead the company to grow like it has in his nine years there.

Vojnovic’s enthusiasm is boundless, say peers, who call him a sold-out shill for Beef’s. His clothes usually bear a Beef ‘O’ Brady’s logo, and he hands out discount cards to strangers in airports with the speed of a casino dealer.

“If we’re out in public, and someone sees his shirt and says, ‘I go to Beef ‘O’ Brady’s,’ they’ve got a ‘free wings’ card in their hands as fast as they say it,” says Don Bosko, a five-unit Beef ‘O’ Brady’s franchisee in Lakeland, Fla. “That’s the kind of guy you want promoting your chain. He’s a one-in-5-million find.”

Ron Wahl, a three-unit franchisee in Tallahassee, Fla., said Vojnovic’s gift with people makes him a Pied Piper for franchisees.

“When you meet him, he’s one of those guys you’ll never forget because he’s that dynamic,” Wahl says. “There are a lot of great leaders out there in this business, but Nick’s one of those guys who can make a company grow by choosing the right people.”

Vojnovic says he was sold on Beef ‘O’ Brady’s when his former bosses Gene Knippers and Chuck Winship bought the chain from founder Jim Mellody. A coach when he started the company, Mellody created a concept into which sports team sponsorship and community involvement were hardwired.

“Jim believed you needed to give back to those who gave to you if you wanted to be successful,” Vojnovic says.

Knippers, chairman of Family Sports Concepts, wasn’t looking to buy a restaurant company when business partner Winship told him about Beef ‘O’ Brady’s, whose pub-style fare includes chicken wings, burgers, sandwiches and salads. But soon he recognized the concept’s potential, and the search to find someone to run it ended as quickly as it began.

“We went straight to Nick and lured him back into the fold,” says Knippers, referring to the two years Vojnovic served as the recruiting and training director at Sunstate Ventures, a 13-unit Chili’s franchise that Knippers and Winship owned. “We needed to sell franchises and grow the company, and we couldn’t think of anyone better than Nick to do that.”

Vojnovic says he couldn’t think of better partners to work with. In their 11 years together, the pair taught him a wealth of lessons about business.

“They’re just so smart and experienced,” Vojnovic says, “that you don’t pass up an opportunity like that easily.”

Winship says Vojnovic is such a natural restaurateur that “he bleeds wing sauce,” but Vojnovic’s mother didn’t want her three sons to work as hard as did her brother, a restaurateur in Belgrade before World War II. Against her advice, however, all three are in the business.

“They say it’s in your blood,” Vojnovic says, “and we’re proof of that.”

Vojnovic’s career began at age 12, when he worked as a dishwasher earning $1.25 an hour at an Italian restaurant in Monroeville, Pa. Each shift earned him “10 bucks and all I could eat.”

Years later, when he worked for Victoria Station, the chain’s founders encouraged him to enroll in Cornell University’s foodservice hospitality program. Soon after, Vojnovic says he wrote down a goal: To become the president of a restaurant company.

“I knew early on where I wanted to go,” he says, “and I’ve never really wavered from that.”

Upon graduating in 1981, Vojnovic received 13 job offers, but to gain a broad overview of the restaurant industry, he worked for two years for the consulting firm of Cini-Grissom and Associates, now Cini-Little.

To return to operations, Vojnovic became a hotel food and beverage director before moving to Atlanta to work as a unit manager for Simon Malone’s Bar and Grill. He loved the structured corporate aspect of the job and excelled in the role.

“They had a great training program, and I liked competing against other GMs,” he says. “I took over a small store that was struggling, and we turned it around. I eventually became the top general manager.”

Vojnovic spent the next few years working for a small restaurant group run by his brother before moving on to Sunstate Ventures. As a newlywed, however, he needed to reduce his hours, so he moved to a management recruiting company for a “9-to-5 job with a briefcase and an office, which was a good change.”

A later stint as a recruiter for On the Border Mexican Grill & Cantina placed him under the leadership of Norman Brinker, who Vojnovic calls his idol.

“When Norman became successful, he saw it as his job to make others successful,” Vojnovic says. “Part of life is sharing what you’ve got in order to help others succeed. He inspired me to do that.”

Vojnovic became vice president of human resources for Famous Dave’s, which had three restaurants at the time. Over the next two years the chain added 18 units. When he got the call from Winship to come run Beef ‘O’ Brady’s, he wasn’t sure the timing was right since he had moved around to a lot of different companies in short period of time.

“Famous Dave’s was doing some exciting things at the time, so it was a tough sell,” Winship says. “But in the summer of 1998, Famous Dave’s had to take some tough steps [to streamline their business] and that was tough on Nick, who’s a real people person. Eventually, he decided he liked the opportunity we offered.”

Back then, Beef ‘O’ Brady’s had only 30 units and a three-person corporate staff. Vojnovic was faced with making what Winship calls “a three-dog show in the beginning” into a corporation staffed with experts in operations, marketing and sales.

“If you look at the phrase ‘intuitive genius,’ you can put Nick in there with Dave Thomas of Wendy’s and John Schnatter of Papa John’s,” says Wahl, who worked for Thomas when he owned KFC stores in the 1960s and is a longtime Papa John’s franchisee. Thomas and Schnatter “were always able to make the right decisions on growth, and I think Nick has that intuitive genius.”

In the nine years since Vojnovic came aboard, unit counts and revenues have grown nearly eightfold to 230 units and $225 million in annual sales. By 2010, the company plans to have 450 units generating $441 million in revenue.

Knippers says he wanted a leader he knew could effect such increases, as well as one he could trust completely. Few people, he says, can match Vojnovic’s integrity.

“Nick’s just incredibly honest, the kind of guy I’d rather have watching my pocketbook more than anyone I know,” he says. “I told him that when he gets out of the restaurant business, I’m going to run him for governor. But I think he’s too honest to be a politician. He’d get elected, but the press would chew him up.”