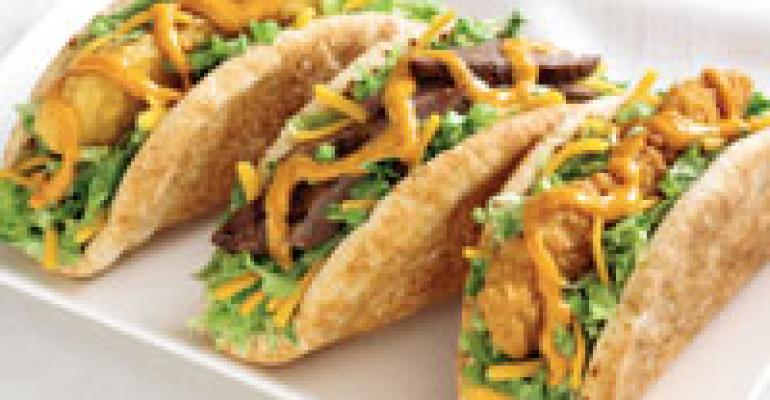 With new snacks, QSRs hope a little turns into a lot

SAN DIEGO With chains like Jack in the Box here and Popeyes adding lower-priced snack items to their menus, more and more quick-service operators appear to be counting on the munchies to drive traffic.

Jack in the Box's new Pita Snacks and Popeyes' The Big Deals lineup are the latest in a surge of snack-oriented product introductions at major fast-food players since McDonald's popular $1.29 Snack Wrap line debuted in 2006.

Jack in the Box on Monday began the rollout of its Pita Snacks menu. The core lineup includes steak, fish, and grilled or crispy chicken varieties, and each is made with shredded lettuce, shredded cheddar cheese and a smoky chipotle sauce. The suggested price is $1.99 each.

Last week Popeyes introduced The Big Deals promotion featuring three chicken snacks for $1.49 each. Among the items is a Loaded Chicken Wrap, which consists of a crispy chicken tender and red beans and rice rolled in a warm cheddar tortilla. A Delta Mini chicken sandwich and a chicken biscuit round out the value promotion, which officials from parent company AFC Enterprises Inc. said was aimed at building traffic during the snack and evening dayparts.

The past year has seen a variety of new wrap-like items. Last November, the Quiznos sandwich chain rolled out its line of $2 flat-bread Sammies. This February, KFC challenged McDonald's in ad campaign that pitted the chicken chain's new $1.29 Toasted Wrap against the Snack Wrap. And this spring, Wendy's launched its own version, the Chicken Go Wrap, which is available with grilled, crispy or spicy chicken for $1.49 each.

Wendy's is being acquired by Arby's parent Triarc Cos. Inc., which has cited snacks as an area of growth potential for both brands.

Other quick-service chains have resisted jumping on the snack bandwagon. Carl's Jr. and sister chain Hardee's, for example, have put their marketing might behind premium-priced offerings, such their $4.49 Prime Rib Burgers.