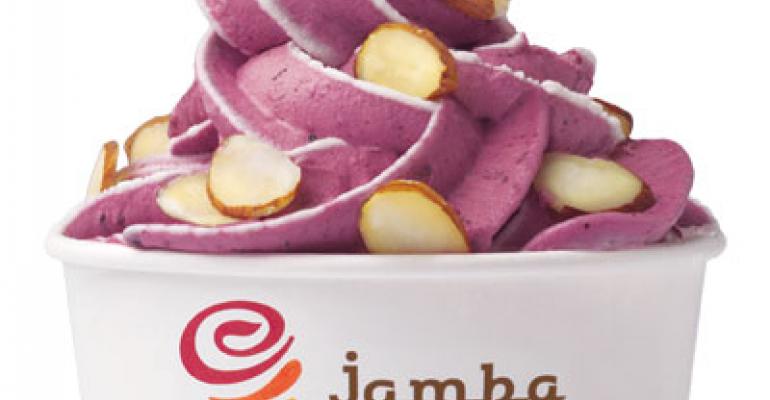 Officials at Jamba Juice said the smoothie chain is rolling out frozen yogurt and new breakfast products this year with the goal of building traffic across all dayparts.

Also soon to come to the menu are a three new smoothies that will combine fruit and vegetables, contributing to Jamba Juice’s positioning as a “healthy, active lifestyle brand,” said James White, chief executive of Emeryville, Calif.-based Jamba Inc.

White praised the company’s progress in meeting goals of its BLEND turnaround initiative, noting that same-store sales sequentially improved in six of the last seven quarters.

“At the start of 2010, we said that the transformation of our company to a healthy, active lifestyle brand would be our mission,” White said. “With the continued implementation of disciplined cost controls, the expansion of our business model into new platforms like hot beverages, breakfast, frozen yogurt and with the commercialization of four consumer product lines, we are gaining momentum in our transformation.”

Over the past two years, the smoothie chain has been beefing up its menu offerings, adding smoothie-compatible dishes such as oatmeal, grab-and-go sandwiches and salads, and other snacks.

In December, Jamba began testing a line of frozen yogurt called Whirl’ns in 22 Northern California locations. The line includes eight flavors that can be custom blended to order with fresh fruit and garnished with toppings.

The Whirl’ns product is similar to the custom-blended offerings of Yogen Früz, the Ontario, Canada-based yogurt chain launched by brothers Michael and Aaron Serruya. The Serruya in 2009 made a $15.45 million investment in Jamba Inc. in 2009.

The breakfast platform added last year included one-cup “Ideal Meals” made with soymilk or yogurt and topped with fruit, organic granola and fresh bananas; as well as hot coffee beverages, to which guests can add nutritional boosts.

White said early tests of both the frozen yogurt and the breakfast menu options have proved “very successful,” and the company plans to accelerate their rollout in 2011.

White said Jamba is expected to complete by early this year the sale of 173 corporate stores, exceeding the goal of refranchising 150 by the end of 2010.

Revenues declined about 17 percent to $42.1 million from $50.6 million in the fourth quarter last year, in part because of a reduction in corporate stores due to the refranchising initiative.

Same-store sales for corporate locations were modestly positive during the quarter, rising 0.2 percent, compared with a decline of 5.3 percent during last year’s fourth quarter.

At the end of the quarter, the Jamba Juice chain included 351 corporate and 392 franchise locations.

More highlights from the conference call:

• Licensing: For the year, licensing revenue was about $400,000 and company officials said they expect that to triple in 2011.

Jamba’s new energy drinks, for example, produced in a licensing deal with Nestle USA, were introduced in stores throughout the Northeast in February. By March 15, the Nestle Jamba All-Natural Energy Drinks are scheduled to be available in 600 Jamba Juice locations across the country.

Soon to come is a line of coconut water beverages produced in agreement with One Natural Experience and distributed through the Pepsi bottling system; a line of Brazilian Superfruit shots; a line of trail-mix products; and functionally boosted fruit cups.

“Fuel, I think, is going to be our biggest challenge right now, with the unrest that we’re seeing in other parts of the world,” White said.

The smoothie chain will be able to mitigate other costs by reworking recipes “so we can stabilize and hold our prices pretty consistent,” he added.

• Outlook: For 2011, the company expects between 50 and 70 new franchised locations will open, and company officials are projecting positive same-store sales between 2 percent and 4 percent.