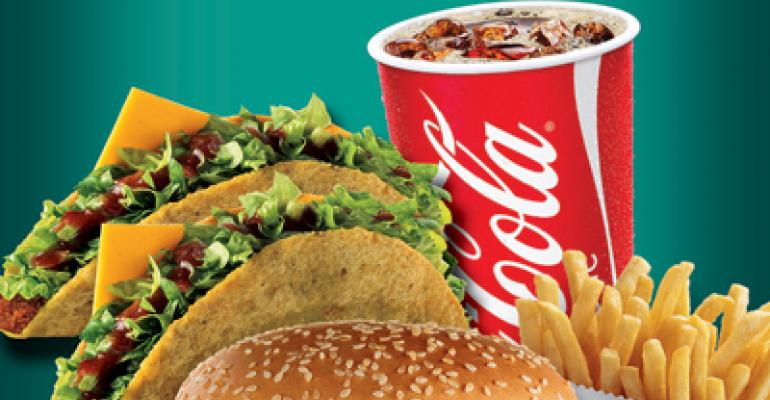 Togo’s, Jack in the Box promos not aimed at consumers looking for healthful resolutions

At a time when restaurant chains tend to appeal to diners who want to eat lighter in the new year, Jack in the Box and Togo’s Sandwiches are launching limited-time offers that take the opposite approach.

San Diego-based Jack in the Box debuted Thursday the new $4.29 Jumbo Deal featuring a Jumbo Jack hamburger, two tacos, a small order of fries and a small fountain beverages, which the quick-service chain said will allow guests to “eat hearty and be merry” at a wallet-friendly price.

“With holiday celebrations tending to leave people a little short on cash, this is the perfect time of the year to roll out our $4.29 Jumbo Deal,” said Tracy Dunn, Jack in the Box Inc.’s director of menu marketing and promotions.

Jack in the Box has done well with bundled promotions. The company has credited same-store sales improvements in part to earlier promotions of a $2.99 Jumbo Breakfast Platter and a $3.99 Really Big Chicken Sandwich combo meal throughout the 2,200-unit chain.

At Togo’s, guests are invited to eat a two-foot-long pastrami sandwich in less than 30 minutes in a promotion to celebrate National Pastrami Day on Jan. 14.

The 250-unit sandwich chain is featuring a two-foot version of its top-selling hot pastrami sandwich between Jan. 11 through Feb. 21.

Called “The Pounder” because it includes one-pound of pastrami, the sandwich typically serves a family of four at a recommended price of $19.99. During the promotion, however, Togo’s is challenging customers to eat the whole thing in less than 30 minutes.

Those who successfully “pound The Pounder” will win a commemorative tee shirt, a certificate and the chance to have their photo posted on Togo’s Facebook page.

Those without a death-by-pastrami-wish also have a chance to win a year of free sandwiches by liking the Togo’s fan page on Facebook. Fans are also invited to “show their pastrami love” by uploading pastrami photos to the page’s photo gallery.