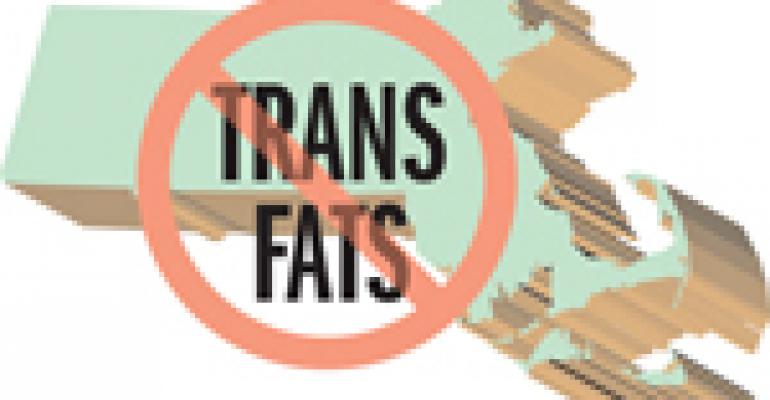 BOSTON Massachusetts Restaurant Association recently told lawmakers here that it would not oppose a statewide ban on the use of partially hydrogenated vegetable oils if the Department of Public Health were to assert that artificial trans fats posed a serious health risk. —The

Peter Christie, president and chief executive of the 5,500-member trade group, told Massachusetts state officials, “If it’s decided that we need to take these things out of our foods in restaurants for public health interests, we’ll be willing to work with you.” —The

But Christie, who said he has “great respect” for Massachusetts’ department of health, also maintained that if the department were to ask the restaurant industry to eliminate trans fats, “it should make sure the science is right.” —The

“If it deems trans fats should be removed,” he said, “then a plan should be put in place that is commensurate to the risk.” —The

The Department of Public Health, with backing from Harvard University, has said it supports reducing trans fat in the diet. Dr. Walter Willett, who is head of the Harvard medical school’s nutrition department, has advised foodservice operators about its research findings that artificial trans fats in food are responsible for thousands of preventable deaths each year. —The

He previously had supported a trans fat ban in Boston when he served as the city’s chief health official. —The

Meanwhile, Christie said the industry was “doing a hell of a good job” responding voluntarily to calls from officials and health advocates to switch to trans-fat-free frying oils. “I’m not sure legislation is necessary,” he said. —The

However, if Massachusetts lawmakers were to prohibit the use of partially hydrogenated vegetable oils, he said the MRA favors a statewide ban on trans fats over a patchwork quilt of local ordinances. That position recalls the “level-playing field” policy a number of state restaurant associations adopted over the past decade with regard to smoking bans in their states. —The

“Restaurant operators shouldn’t have to use one kind of oil in one town and a different kind in another,” he said. —The

Christie also insisted that the state must give restaurateurs enough time to implement the changes and find satisfactory replacement oils. —The

Michael Jacobson, executive director of the Washington, D.C.-based Center for Science in the Public Interest, commended the MRA for taking “a cooperative stance” on the issue. —The

“Maybe the industry is recognizing that it can be part of the solution and not the problem,” said Jacobson, whose group has sued KFC and Burger King over the use of oils containing trans fats. “I suspect the decision will have an impact in other states as well.” —The

The Massachusetts Legislature currently is considering a ban proposed by Rep. Peter Koutoujian, D-Newton, the House chairman of the public health committee. —The

Brookline, a suburb of Boston, earlier this year became the first town in Massachusetts to pass a ban on partially hydrogenated vegetable oils, although the ban does not take effect until November 2008. Officials in Boston and Cambridge also are discussing bans. —The

Connecticut lawmakers attempted to pass a trans-fat ban earlier this year, but the measure was defeated. California, Hawaii, New Jersey, New York, Tennessee and Vermont also are mulling trans fat bans. A number of cities and counties, including Albany, N.Y., and Seattle, are expected to address the issue later this year. —The

Most industry executives, notably officials at the National Restaurant Association in Washington, D.C., oppose all mandatory trans-fat restrictions, arguing that foodservice operators should be allowed to make the change voluntarily. Sue Hensley, the NRA’s senior vice president of marketing, communications and media relations, said the industry has made great strides over the past year, “from the largest chains to the smallest independent, in going trans-fat free.” —The

“We don’t see the necessity of a mandatory ban,” she said. —The

An increasing number of foodservice operators have switched to trans-fat-free oils or said they are in the process of making the switch. They include such chains as McDonald’s, Burger King, T.G.I. Friday’s, Popeyes Chicken and Biscuits, Marriott hotels, The Walt Disney Co., Wendy’s, Ruby Tuesday, Taco Bell, Legal Sea Foods, B.R. Guest, The Cheesecake Factory, and many others. —The

Dunkin’ Donuts, the quick-service brand owned by Canton, Mass.-based Dunkin’ Brands, said in a statement: “In fall 2004, Dunkin’ Donuts acted independently to remove trans fats from our muffins and many of the items available at Dunkin’ Donuts restaurants. Since that time, we have been actively investigating alternative oils to eliminate trans fats, including creating a dedicated research and development team that has to date evaluated more than 22 different alternative oils and conducted 67 independent tests in our culinary labs. We will continue to work to meet any deadlines set by the Commonwealth of Massachusetts.” —The

Frank Guidara, president and chief executive of the 200-unit Uno Chicago Grill, based in West Roxbury, Mass., believes every restaurant should attempt to eliminate artificial trans fats from its menu. Guidara also has served on the Harvard School of Public Health Nutrition Roundtable since 2001. —The

“[Trans fats] are definitely bad, and Uno is in the process of eliminating them,” he said. However, he added that he would prefer to see restaurateurs remove them voluntarily. —The

Jasper White, the owner of four Summer Shack restaurants in Massachusetts and Connecticut and a soon-to-open location in Atlantic City, N.J., said that while he uses trans-fat-free canola oil in his restaurants, the choice of cooking oil is not the problem. —The

“I think the real problem is the amount of fried foods people eat, not the frying medium,” White said. “Fried foods should be treated like dessert, eaten once or twice a week. Unfortunately, Americans eat a ton of French fries. And no matter what they do with the oil, they’re just not healthy.” —The