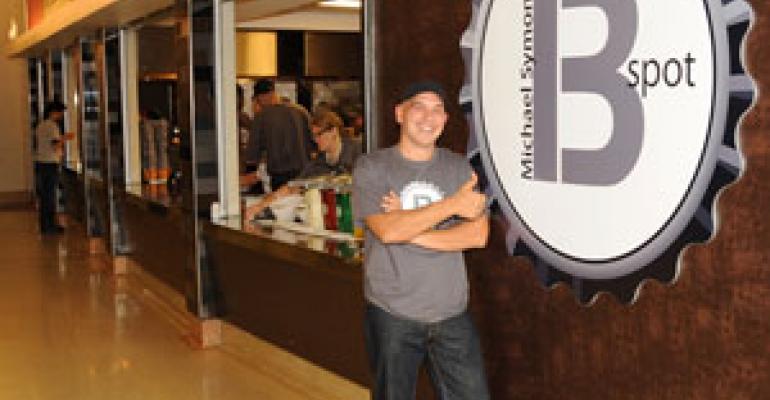 CLEVELAND It’s no coincidence that the rookie wooing Cleveland Cavaliers fans this season was a local standout before entering the big arena. Team supporters like to see a homegrown favorite when they go to a game, and that’s as true for burgers as it is for point guards or forwards, according to Aramark, concessionaire for the Cavs’ Quicken Loans home court.

That’s why the management company penciled Cleveland’s own Michael Symon and his B Spot burger concept into the arena’s restaurant lineup this fall, said Monica Hahn, vice president of marketing for Aramark’s Sports, Entertainment & Conventions division.

Symon is the LeBron James of the Cleveland culinary scene, renowned for his two fine-dining restaurants, Lola and Lolita. His skill in the kitchen has drawn national attention and accolades, including Best Chef of the Great Lakes Region in the 2009 James Beard Awards. He also appears on “Iron Chef America," the Food Network's popular on-air cooking competition.

He may be a national star, but he remains the pride of Cleveland, according to Hahn. He’s just the sort of hometown hero who can stoke a fan’s spirit when they grab a bite between quarters, regardless of how their team is doing on the court, she said.

“We’ve done a lot of market research with fans,” she explained. “We found that food is a big part of the experience of going to a game, and that experience has a lot of emotions to it,” not the least of them being “pride in your city.”

Offering something authentically hometown embellishes that pride and the overall experience, Hahn said. Hence the partnership with Symon. “Burgers are sort of generic, but a Michael Symon burger is authentic Cleveland,” she explained.

The B Spot also features brats, a hometown favorite, and micro-brewed beers, including some from the region.

The burger lineup includes the Symon Says, a patty topped with fried bologna, American cheese and “whip sauce,” Symon’s riff on Miracle Whip, an acknowledged guilty pleasure for the chef. The sandwich is accompanied by coleslaw. Other side options include Lola fries, or French fries seasoned with rosemary, a signature selection in Symon’s restaurants.

Plain, cheese-topped or bacon-garnished burgers also are available at B Spot.

Hahn acknowledged that, “yeah, we can charge more” at B Spot than Aramark usually gets for a burger. But she says the pricing has to be consistent to the concept. For instance, she says, the company didn’t take a bigger mark-up at Shake Shack, the burger joint run in partnership with Danny Meyer’s Union Square Hospitality Group at Citi Field, the new home of the New York Mets. “Part of that concept is getting a really great burger at an affordable price, so the prices are the same as what you’d spend at the Shake Shack on the Upper West Side,” she said.

Shake Shack, a retro burger concept with a cult following in New York City, was one of Aramark’s earlier efforts to offer an authentic local burger choice.

Symon is planning to open a freestanding B Spot elsewhere in northern Ohio. In the meantime, his spot at The Q, as Cavs fans call the Quicken Loans Arena, is “doing great,” Hahn said. She declined to reveal sales figures, noting that the outlet was only a few weeks old.

But if it performs as Shake Shack has, it’ll be a slam-dunk, she said.

“[Shake Shack] exceeded our expectations in every possible way,” be it sales volume or sheer buzz for Citi Field’s new food array. “It’s a definite homerun, and homeruns were definitely needed at Citi Field this season,” she joked. The Mets, picked by many at the start of the baseball season to earn a World Series appearance, finished solidly out of contention in part because of a disappointing offense.

And a burger, in whatever form, is definitely getting more attention as the company looks at what sports enthusiasts want, she added. “It meets the need of a sports fan because it’s portable and it’s quick,” she said.

Economic conditions are sharpening that interest in burgers, on the part of seller as well as buyer, according to Hahn.

“A burger is something you can still buy and produce at a reasonable price,” she said. “It’s also a comfort food, and comfort foods are really in demand, we’ve found.”

Aramark has developed a proprietary choice called the Blazin’ Burger as a way of offering a standout burger, possibly with local flavorings. “It’s the type of thing you might get at a burger chain, with some spicy toppings,” Hahn explained. “You can offer it with trendy toppings,” either as a signature or even as a limited-time offer.

Whatever the means, Aramark will continue to offer flavors and foods that sports fans view as a source of local pride, be it “a burger or a crab cake,” Hahn said. “We look at each venue to decide what’s authentic to that market.”