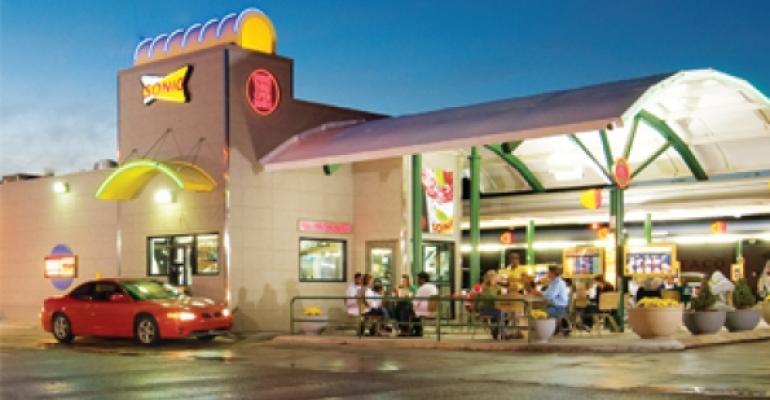 When the research and development team at Sonic, America’s Drive-In set out to create the chain’s next signature dish, they didn’t have to look far for inspiration. The foundation for the chain’s latest success was already on the menu.

“As we were reviewing our menu and seeing areas where people associated a product with Sonic, hot dogs kept coming to the top of the list,” said Matt Schein, senior director of brand marketing for the chain. “This felt like a natural extension for us.”

The hot dogs also capitalized on a confluence of culinary trends, including the growing interest in street food, comfort foods and location-specific flavors.

Each is priced at $1.99, another factor in the success of the line, Schein said.

“The economy wasn’t terrific, and we could have a decent price point,” he added. “It all came together.”

More than 70 million of the all-beef hot dogs have been sold since they were introduced last year.

“We definitely saw some real positive momentum when they launched,” Schein said. “It continues to deliver for us and give us the opportunity to bring in ... new flavors.”

Two more limited-time additions to the line will debut in July. The company did not disclose the flavors for the upcoming hot dogs.

It took about a year to bring the hot dogs from ideation to launch, the company said, and the process included national research, testing in four markets, new smallwares in the stores and a new training regimen.

The first step, though, was selecting the right flavor profiles.

The development team conducted hot dog “dine arounds” in cities nationwide, including Dallas, Chicago, Philadelphia and Los Angeles, where they visited the iconic Pink’s Hot Dogs. Each hot dog and topping was scrutinized to identify not only the right flavors but also the vendors that could meet the needs of the 3,600-unit chain.

“As we went across the country, we saw certain flavors — sauerkraut, relish, chili — were everywhere,” Schein said. “It was pretty easy to narrow it down to the four [flavors] we chose.”

Still, there was the challenge of trying to replicate beloved hometown flavors. “People are very passionate about [their local hot dogs],” product innovation manager Trevor Wilson said. “There was a lot of risk there. Are people going to get it? Is a pickle on a hot dog weird? Will they even know what a sport pepper is?”

The regional flavors did resonate with guests. In fact, the Chicago Dog, which the development team expected to be the most polarizing, turned out to be the best-seller.

“I was nervous to open up the list of comments,” Wilson said. “[But] I’ve never seen such an overwhelming response on our customer care line. People said, ‘I used to live in Chicago. I was skeptical, and I’m totally surprised how you nailed it. It reminded me of being back home.’

“That really let us know we hit the mark,” he added.

Aaron Noveshen, founder and president of The Culinary Edge, a San Francisco-based consulting firm, said Sonic strikes a balance between following culinary trends and staying true to the brand.

“Burgers have really been the big thing of the last 10 years. The next wave coming is in the hot dog space,” he said. “[Sonic] is truly on trend from a perspective of what’s next in a big category where they don’t have to teach people or introduce people to [a dish] they don’t understand.

“It’s tremendously good branding,” he added. “They’re not trying to do teriyaki or something. Sonic is so American. And what’s more American than a hot dog?”

Yet even though the line was a logical move for the chain, its creation wasn’t without its challenges.

“I’ve been with Sonic for six years, and this is one of the more complex rollouts due to the number of new [products],” Wilson said. “There were nine new [ingredients]. Typically, on a new menu item, we’re closer to two or three.”

Among the ingredients that had to be brought into the units were relish and sport peppers for the Chicago Dog, and sauerkraut and spicy mustard for the New York Dog.

Those new ingredients also had to be incorporated into the kitchens’ workflow.

“We had to create space in the Coney station so staff didn’t have to crisscross the kitchen,” said Jeff Carper, vice president of operations services. “We developed a new condiment station with one of our vendors that could hold all of the condiments in one spot.”

The holding stations required a $200 to $400 investment, a cost Carper said most franchisees were willing to take on despite the hot dogs’ low price point.

Sonic also rolled out an initiative to train franchise directors, unit-level managers and hourly workers. It was important to get the execution of the hot dogs right, Carper said, because the chain expected the items to join the original Coney as a lasting part of Sonic’s core menu.