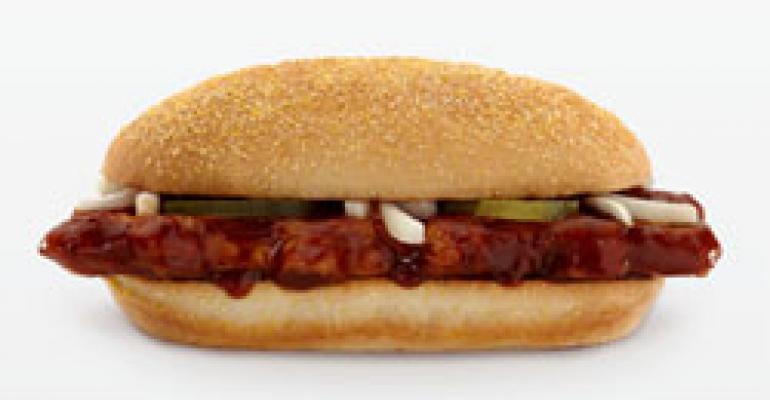 What’s old is new again in the restaurant industry, judging by the recent slate of familiar limited-time offers and promotions being offered by some of the nation’s largest brands.

This week marked the debut of two big restaurant encores — McDonald’s McRib sandwich and Little Caesars’ “Pizza! Pizza!” tagline — even as several other U.S. chains also took the opportunity to revisit their roots.

Now through Dec. 5, McDonald’s will offer the McRib sandwich on a nationwide basis. Since its first test-marketing run in the early 1980s, the sandwich has launched thousands of road trips for loyal fans traveling to the regional markets where it has been a sporadic limited-time offer. The last time the McRib was offered nationwide was in 1994 as a promotional tie-in to the “Flintstones” movie.

The Oak Brook, Ill.-based quick-service chain is fueling the product relaunch with a contest website, “The Legends of McRib.” Sandwich devotees are asked to submit their own stories of the McRib’s legend. The winning storyteller will receive a free trip to Germany, the only country where the McRib is offered year-round — a strategy McDonald’s USA has no plans to emulate, since McRib’s limited availability helps drive its appeal.

Fans of another well-known campaign also have waited a long time for its return. Detroit-based pizza chain Little Caesars has dusted off its long-retired “Pizza! Pizza!” promotion, which ran from 1979 to 1997. This time around, however, the promotion will take a new form. The new Pizza! Pizza! Pantastic will offer two rectangular pizzas, one pepperoni and one an Ultimate Supreme version, for $9.99, with a crust that’s thicker than its original pizza crust but thinner than deep dish. The offer currently is in test in the metro Detroit market, and the chain may expand it next year.

“‘Pizza! Pizza!’ revolutionized the industry because it provided exceptional value and enabled families to put a great meal on the table,” said Brian Pattison, Little Caesars’ Midwest zone vice president. “Now we’re introducing Pizza! Pizza! Pantastic, which combines that great value with the convenience of Hot-N-Ready,” which is the chain’s current offer of a large, instantly available pepperoni pizza for $5 in most locations.

Elsewhere in the industry, Louisville, Ky.-based KFC has launched a campaign to reintroduce its iconic founder, Col. Harland Sanders, to younger consumers, many of whom are not aware that he was a real person who founded the restaurant concept decades ago. The latest promotion supporting that effort was to offer free Doublicious sandwiches for life to a random winner dressed as the Colonel on Halloween.

Earlier this year, Caribou Coffee, based in Minneapolis, Minn., reintroduced its original tagline — “Life is short. Stay awake for it.” — as part of a systemwide rebranding. The campaign has been designed not only to re-engage with consumers, but with employees as well, imparting the corporate culture of the brand’s founders to new staffers and employees who have been with the company since the beginning.

“Part of the whole context was how you evolve the brand rather than just changing everything,” Caribou Coffee chief executive Mike Tattersfield said. “It really needed to connect to the original DNA of the concept because then you also speak to your team members.”

The revival of successful items and campaigns at this point in time is probably more of a coincidence than a response to consumers needing familiarity or nostalgia, said industry marketing consultant Aaron Allen. But restaurants tend to retire successful campaigns out of boredom, turnover in the executive suite, or a perceived need to innovate, he said, and the companies revisit them every so often because they are easy to implement.

Two months ago, on a trip to Saudi Arabia to research American brands expanding in the Middle East, Allen saw “Pizza! Pizza!” emblazoned on the signage of a building, and immediately thought a Saudi pizzeria was trying to be a knock-off of Little Caesars. The building turned out to be a Little Caesars-owned property.

“For me as a consumer, I saw that and thought, ‘Hey, that’s Little Caesars,’” Allen said. “I identified the tagline more than the company name. It’s an example of where we in the industry get away from things that worked.”

He added that the industry’s propensity to reprise proven slogans and limited-time offers stems from the fact that they have lower costs and shorter lead times to execute. They also pose less risk to chief executives and chief marketing officers under pressure to produce results.

“Even if there is continuity in management, these bigger chains have product rollouts that take 18 months to two years to implement,” Allen said. “If it’s something they’ve done before, they have quicker speed to market.

“Sometimes it’s easier to do something again, especially if you have previous results as a benchmark and the operations and marketing in place to do it,” he said.

But Allen acknowledged that innovating new products and improving service and décor are the proactive steps that winning companies take to succeed — which McDonald’s has done this year with McCafe Frappes and Real Fruit Smoothies, and Little Caesars has done with the Hot-N-Ready. As a result, he theorized, most brands are likely to cycle back toward promoting new offerings.

“We know across the country right now that we’re probably at the end of the recession and that 2011 could be different, but that’s just optimism,” Allen said. “Do you reel out a campaign ahead of that, or do you play it safe to wait and see?

“It may be our last round of wait and see, and I think 2011 is going to be exciting for the industry,” he said. “I think most of what we’ll be talking about in 2011 will be brand new stuff.”