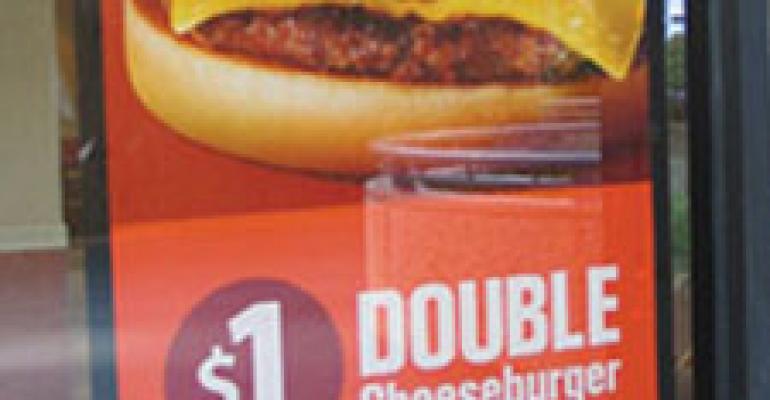 OAK BROOK ILL. McDonald’s, despite sales volumes and product procurement clout that are unmatched among chain restaurants, has forecast that continuing commodity cost spikes, especially for such core purchases as beef, will force the chain to make substantial alterations to its Dollar Menu. —

Without divulging specific changes or indicating whether the name would have to change, Ralph Alvarez, McDonald’s president and chief operating officer, told analysts and investors during a conference call that the bellwether Dollar Menu would be revamped to bolster its eroding profitability. —

Adjustments McDonald’s would make to its Dollar Menu, which accounts for about 14 percent of McDonald’s nearly $28.6 billion in annual sales, could represent a new marketing direction for the world’s largest restaurant chain as it wrestles with food inflation. —

“What fits on that menu will look different than now, because it has to be profitable,” Alvarez was quoted as saying. —

McDonald’s franchisees in several major U.S. markets with high operating costs already have boosted the prices of items on the Dollar Menu, sometimes doubling the signature price-point value its name implies, especially for such things as Double Cheeseburgers. —

In May, executives of the Oak Brook-based franchisor said it would keep the Dollar Menu to maintain customer loyalty, despite rising commodity and operating costs. But since then, foodservice economists have pegged wholesale food inflation for the first six months of 2008 at 8.2 percent, on top of last year’s 7.6-percent jump. —

U.S. beef alone will rise this year by 8 percent to 9 percent because of price pressure stemming in part from increased purchases of the commodity by Russia and other countries, McDonald’s said. —

Nonetheless, “we are committed to value,” chief executive Jim Skinner told reporters after McDonald’s annual shareholder meeting earlier this year. “This is not the time to be moving off of it. We are committed to everyday affordability and have to stick with it.” —

However, just after the company late last month disclosed second-quarter earnings of $1.19 billion and a 3.4-percent jump in U.S. same-store sales, Alvarez said the percentage of sales coming from the Dollar Menu “hasn’t grown significantly, but costs have.” —

McDonald’s is working with franchisees to test ways the Dollar Menu can grow traffic, he said. —

Chief financial officer Pete Benson, in forecasting the nearly 9-percent spike in beef costs for the year for the chain’s U.S. and European units, laid part of the blame on the weakened U.S. dollar and its invitation to bargain-hunting foreign buyers of American beef. —

He also cited other protections from cost fluctuations that the 31,000-unit chain enjoys as a result of its ability to negotiate favorable fixed-cost purchasing contracts, to pursue buying opportunities worldwide and to leverage long relationships with suppliers. However, he said the chain has raised menu prices an average of 4 percent to absorb rising costs. —

McDonald’s Corp.’s second-quarter net profit represents a swing back into the black following a net loss for the same period last year of $711.7 million, related to the company’s sale of its Latin American and Caribbean restaurants to a licensee-developer in South America. —

Yet despite its multibillion-dollar profits, the company is seen as vulnerable to macroeconomic pressures. Even after the upbeat quarterly earnings and sales report, a Duetsche Bank analyst said McDonald’s risks falling traffic, lower margins and slowing growth rates despite being positioned better than most other chains to survive the difficult economic environment. —

The coffee tests at some 1,600 restaurants are “tracking ahead of projections,” Alvarez said, contradicting recent press reports that cited internal documents as indicating a sometimes-sharp drop-off in espresso sales following peaks attained three weeks after introduction. McDonald’s previously had projected that the new beverage platform, once fully rolled out, would generate an added $1 billion in annual sales systemwide. —

McDonald’s worldwide corporate revenues for the quarter rose 4 percent to $6.08 billion. Same-store sales grew 8.8 percent in the Asia-Pacific/Middle East/Africa division, led by Australia and Japan, and were up 7.4 percent in Europe, spurred by Germany, France and the United Kingdom, the company said. —