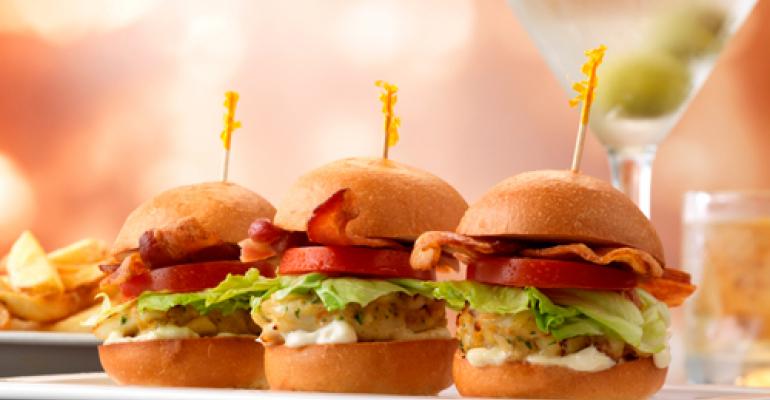 A look at what to expect on fall menus

While local, seasonal ingredients will continue to anchor menus this fall, chefs and restaurateurs are focusing on innovations that allow guests to customize their visits and to eat and drink at unconventional times and places.

As the weather cools and the economy remains tepid, many operators also expect side dishes and vegetable-based preparations to become more prevalent, giving the customers the option of mixing and matching, sharing or possibly just splitting a few sides with cocktails in the afternoon.

The afternoon daypart might be the focus of many restaurateurs this fall as they offer charcuterie platters, cheese courses, and a wider selection of bar food to draw customers for happy hour.

Along those lines, Chicago-based Morton’s The Steakhouse recently expanded its Bar Bites menu with such items as a trio of mini crab cake BLTs and a smoked salmon pizza.

Of course, with fall comes football and the food promotions that go with it — several of which are decidedly nontraditional. “We are hoping to serve frog legs in the style of hot wings for football season,” said Cary Taylor, chef at The Southern in Chicago.

Vegetables are expected to take center stage in more dishes this fall, with protein acting as supporting character. “Protein production uses many more resources and generates much more waste than vegetable production,” said Nick Oltarsh, chef of Lobby Bar and Bistro and Room at Twelve in Atlanta.

Carey Savona of Heirloom at The Study at Yale Hotel in New Haven, Conn., also expects vegetables to be in the spotlight, possibly “with meaty or fish fringe players.” Savona plans to offer such vegetarian items as braised black kale bruschetta with walnut raisin pesto and breadcrumbs, and purple haze cabbage pickles with cotechino crostini.

John Fraser, the executive chef at Dovetail in New York City, introduced meatless Mondays earlier this year and has come to enjoy focusing on cooking vegetables so much that he said he is toying with the idea of opening an all-vegetarian restaurant.

Looking to seasonal items, Cracker Barrel launched a number of apple-inspired dishes for the early fall, through October 24. They include low-fat vanilla yogurt blended with cinnamon-spiced apples and topped with honey oat granola mix. Also on offer is an apple bran muffin. Apple streusel French toast has also been added to the breakfast menu.

But while chefs are looking toward the fall, some also said they expect to do more this year to extend the life of their summer produce.

At the recently reopened Equinox in Washington, D.C., chef Todd Gray has added shareable vegetable side dishes — a way to help customers feel more virtuous about what they're eating without making them sacrifice their meaty main courses. At the same time, dishes help boost check averages, he said. Among his selections are crispy silver queen okra, caramelized tricolor cauliflower, and summer succotash with housemade bacon.