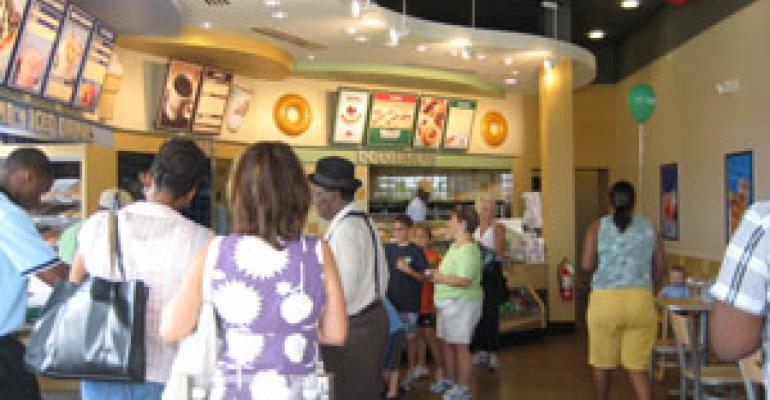 WINSTON-SALEM N.C. Krispy Kreme Doughnuts on Monday debuted its first Neighborhood Shop and Kremery, one of two smaller retail concepts the doughnut company is using to expand into new locations.

The new company-owned store is located in a shopping center in Knightdale, N.C., a suburb of Raleigh. At 1,750 square feet, the Neighborhood Shop and Kremery is roughly half the size of the chain's freestanding 4,000-square-feet "factory" stores, said Brian Little, director of corporate communications for Krispy Kreme.

Little said the streamlined prototype, which will generally be 900 to 1,300 square feet in size, would help the 535-unit Krispy Kreme attract more customers by offering more convenient locations in areas that couldn't support large stores.

"Consumers have told us that they would visit more often if it were convenient to them," Little said. "These smaller shops allow us to bring our signature products and new products to consumers.

"It's difficult build a 4,000-square-foot doughnut shop with doughnut factory equipment in a shopping center," he added.

Krispy Kreme is not the only snack concept introducing a smaller prototype to give it more flexibility in site selection. In February, Baskin-Robbins, which is owned by Canton, Mass.-based Dunkin' Brands, said it would begin rolling out a200-square-foot unit dubbed BR Express and intended for use in onsite venues, such as airports and college campuses.

And Wilbraham, Mass.-based Friendly's Ice Cream Corp. said last December it would test a fast-casual express prototype of its family-dining restaurants this year in Boston, Springfield, Mass., and Providence, R.I. The Friendly's units, which are 2,200 to 2,400 square feet, offer a reduced menu focusing on the core items served at the brand's full-service restaurants.

The Neighborhood Shop offers the same menu as a traditional Krispy Kreme store, including doughnuts, coffee and frozen drinks. The store also offers cones, sundaes and shakes made with the chain's new Kool Kreme soft serve and items from a toppings bar. However, unlike traditional stores, the new concept's doughnuts are prepared off-site and delivered several times a day.

"If you can provide a shop in a smaller, more convenient location that provides fresh products that are delivered to the shop multiple times a day and still offer your complete menu, you make yourself more convenient to consumers that may not have visited your shops before because of their locations," he said.

Krispy Kreme and its franchisees have already opened outposts of the chain's other smaller retail concept, the Doughnut Factory and Kremery. Those stores range in size between 1,300 and 2,500 square feet and contain some doughnut-making equipment, Little said. Some Doughnut Factory locations produce doughnuts start to finish, while others receive deliveries of partially baked doughnuts and then finish baking and glazing them on-site.

Like the Neighborhood Shop, the Doughnut Factory and Kremery serves the chain's soft-serve product, which Little said was still in "expanded test mode."

Little said the two smaller concepts would drive much of Krispy Kreme's growth moving forward. The company has opened three corporate stores in the past five months and plans to open another three by year-end, he said.

New smaller stores are planned around existing factory stores, which provide the doughnuts. That system, Little said, also helps "improve the utilization" of the larger locations.

Krispy Kreme has struggled in recent years with falling sales after rapid expansion followed by allegations of corporate misconduct in 2004. Since then, the company has closed hundreds of stores, changed its management and introduced new products. The companyÕs latest fiscal year, which ended Feb. 1, was the first time it logged an annual operating profit since 2004.

In its most recent first quarter, ended May 3, Krispy Kreme reported a 54-percent drop in first-quarter profit on a 10-percent decline in revenue and charges related to lease terminations and credit facility changes. Same-store sales at company stores rose 2.1 percent in the quarter.