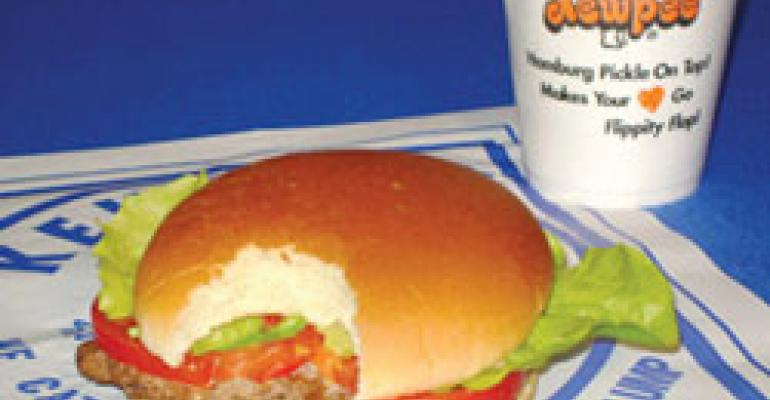 In Lima, Ohio, where industry is struggling and jobs are scarce, there’s always Kewpee to brighten the day.

“People always think the best hamburger comes from their hometown, but in our case it’s true,” said Bart Mills, a veteran reporter for the city’s daily newspaper, The Lima News. “It’s a tradition to eat at Kewpee. A sign on the downtown store says, ‘Your Granpappy ate here,’ and that’s true for just about everybody in Lima.”

The Kewpee Hamburgers store in Lima opened in 1928, when Hoyt “Stub” Wilson built a restaurant on North Elizabeth Street in downtown Lima. The three-unit Kewpee chain generates more than $6 million in annual sales and remains a beloved fixture in this Northwest Ohio community.

The units are among the few remaining of a chain that once numbered about 400, according to “Selling ‘em by the Sack: White Castle and the Creation of American Food” by David Gerard Hogan. The Kewpee concept itself was founded in 1923 in Flint, Mich., by Samuel V. Blair, and is credited to be among the first fast-food concepts to use drive-up service. Wendy’s founder Dave Thomas once said that the Kewpee near his home in Michigan inspired him to go into the business. Two other Kewpee units, in Lansing, Mich., and Racine, Wis., remain in operation.

“It’s an institution in our city,” he said. “Their hamburgers are the absolute best. I go there once or twice a week, and it shows.”

“The food is great, the service is terrific, it’s always busy and the drive-thru traffic is unbelievable,” she said.

In fact, Hanjora explained, when her brother-in-law was living in California, the family fed his Kewpee fix by regularly shipping burgers to him.

“When you’re away from Lima, you miss two things desperately: your family and Kewpee — and not necessarily in that order,” he said.

Kewpee appeals to all ages, Harry Shutt said in explaining the concept’s longevity.

“For the older people, I think it’s the nostalgia,” he said. “We’ve been here for years and years. They know they’re going to get good food at fair prices, and the restaurant is very clean. We’re big on cleanliness.”

The three units are also very plain, Shutt added. The downtown store is white porcelain with an Art Deco dŽcor and seats around 40; Kewpee West seats 80; and the newer Kewpee East has room for 160. Each is open daily from 5:30 a.m. to 10 p.m.

The Kewpee chain was named after the Kewpie doll, which is represented by a statue on top of the downtown building.

“My kids always ask, ‘Why is there a naked baby on top of the restaurant?’” Hanjora said.

Against the larger, well-heeled fast-food chains in Lima, Kewpee’s burger is a clear winner, said Scott Shutt, who noted, “With a fresh ground product like ours, there is just no comparison.”

Every day, Keystone Meats of Lima, delivers locally raised, boneless beef to each Kewpee restaurant. Then employees grind and patty that day’s burgers.

“It’s a lot of work to make really fresh hamburgers, but that’s what sets us apart,” Scott Shutt said. “We also use fresh onions, we have a guy who grows lettuce for us, and use a bun especially made for us from an old German recipe.”

Hamburgers reign at Kewpee, where the chain’s tagline is “Hamburger pickle on top! Makes your heart go flippity flop!” But Kewpee is more than burgers. Doughnuts, sweet rolls and omelets are available in the morning, and there are lots of pies, fries, chili and shakes at any time.

“Our large coffee is only 90 cents, and we’ve been chosen the best coffee year after year,” Scott Shutt said.

“The other fast-food outlets are sort of interlopers here,” Mills said. “Kewpee is truly a taste you can identify with your hometown.”

Addressing the industry’s current economic challenges, Harry Shutt said: “Lima was one of the first areas in the country to go down starting in the 1950s. We’ve been down so long that when recessions come, we don’t really notice because we live down there.”

The labor pool in Lima mirrors that in many areas. Young people come and go, while older workers tend to stick around. Kewpee has 104 employees in its three locations, and offers profit sharing and hospitalization.

“It’s hurtful when the media calls fast-food workers ‘burger flippers,’” Scott Shutt said. “We have a lot of people who have been with us 30 to 40 years and who retire here.”

The Shutt family’s involvement in the community is part of Kewpee’s success, Mills said.

“They’re well-known and well-loved,” he said. “They’re huge sponsors of many events in our city, and they don’t mind sharing the wealth.”

“It’s amazing,” Hanjora said. “You ask them for help, and they give it to you.”

Hamburgers aside, taking care of customers is the bottom line at Kewpee, Harry Shutt explained.

“One of our older slogans was ‘We cater to all the folks,’” he said, “and that’s really the way we do business.”