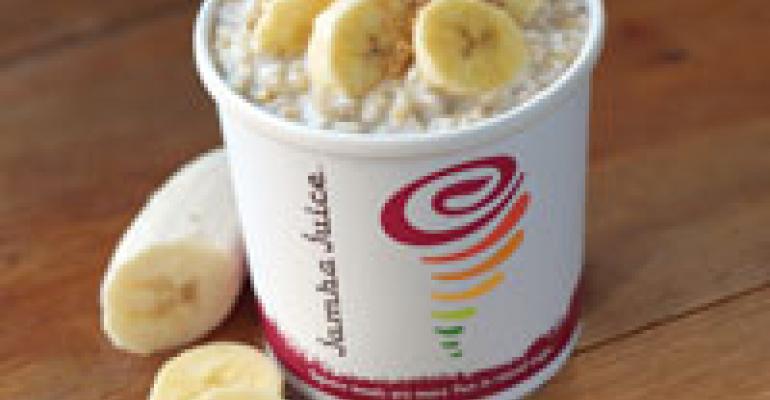 “We’re hoping to create some excitement around Jamba’s breakfast daypart,” he said. “From a taste and performance standpoint, we believe we’ve got the best oatmeal.”

Over the past year, Jamba officials have pledged to beef up the smoothie chain’s food offerings as a means to turn around flagging sales. Earlier this year, Jamba Juice introduced granola-topped breakfast smoothies, more hearty “chunky smoothies” to be eaten with a spoon, and new baked goods.

In three West Coast markets, Jamba Inc. is also testing the sale of Organic To Go branded food items, including salads, sandwiches and cookies. Based in Seattle, Organic To Go operates 33 fast-casual organic cafes and supplies wholesale organic products to other foodservice operators.

Jamba’s new menu item appears to target Starbucks, which introduced oatmeal at breakfast earlier this year and has since called it a top seller. Starbucks officials described their oatmeal launch as a “home run hit.”

To celebrate the launch, Chicago-area Jamba Juice locations on Thursday are scheduled to deliver oatmeal to workers at nonprofit agencies throughout the city. One Chicago store also will stage a “knitfitti,” during which guerilla knitting artists will decorate the store with handmade knitwear.

Jamba Inc. operates or franchises 749 stores across the country.