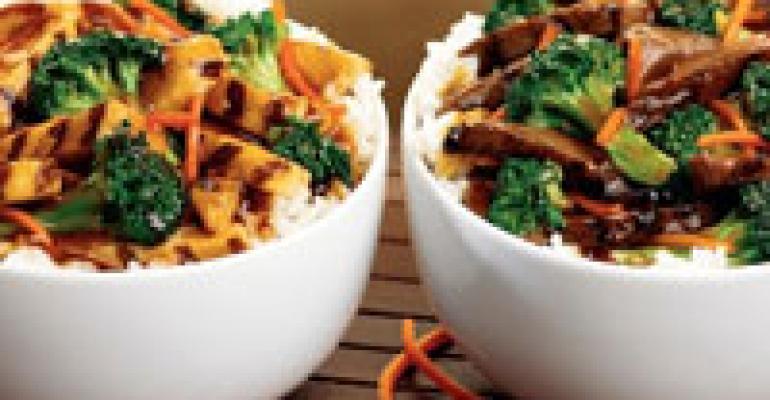 Jack in the Box adds 4 items to menu

SAN DIEGO Jack in the Box announced several new permanent menu items on Monday, including the return of the Teriyaki Bowl to most of its restaurants in the Western United States.

The Teriyaki Bowl includes steamed white rice, broccoli, carrots and a choice of chicken or sirloin steak, all topped with teriyaki sauce. The franchisor-suggested price is $4.29 for the chicken Teriyaki Bowl and $4.79 for the steak version.

Jack in the Box introduced the Teriyaki Bowl in 1993 but removed it 10 years later "due to changing tastes," according to a statement from the 2,100-unit chain.

"We've had plenty of products come and go over the years, but few made an impression like the Teriyaki Bowl," said Teka O'Rourke, director of menu marketing and promotions. "We've had lots of requests to bring it back, so we did, and it tastes just as great as the original."

Jack in the Box also said it would roll out a Homestyle Chicken Fillet, primarily to restaurants in the chain's Central and Southeastern U.S. markets. The new chicken, which Jack in the Box describes as having a "buttery, crispy coating," will be featured in two new menu items, the Homestyle Ranch Chicken Club and the Breakfast Homestyle Chicken Biscuit. The sandwich, which includes Homestyle Chicken, bacon, cheese, lettuce, tomato and ranch sauce, is priced at $4.29. The chicken biscuit sells for $2.99.

Finally, Jack in the Box has added Mini Churros systemwide. Spokeswoman O'Rourke said the crunchy, bite-size pastries were Jack in the Box's attempt to capitalize on the mini-dessert trend. The churros are priced at $1 for five and $1.89 for 10.

In addition to its 2,100-unit namesake chain, Jack in the Box Inc. operates or franchises more than 400 Qdoba Mexican Grill fast-casual units.