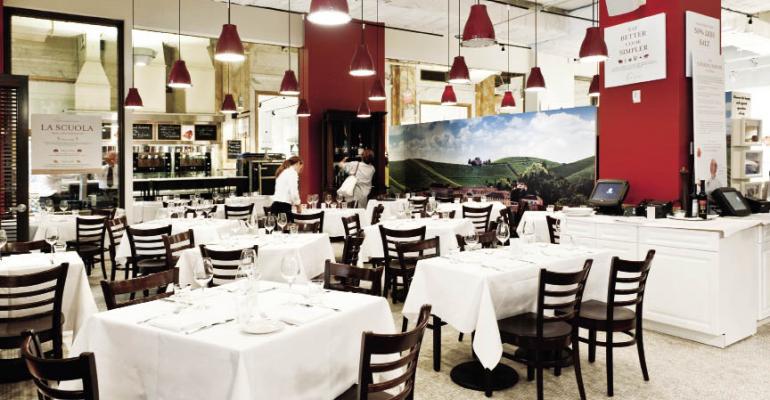 In a society fond of authentic Italian food but habitually in a hurry, it’s challenging to serve cuisine rooted in painstaking, traditional practices.

But some operators of Italian restaurants in the United States are finding ways to reconcile “slow food” with fast times through kitchen equipment and designs that promote efficiency and save labor — all while preserving the integrity of ingredients and making high-quality Italian dishes available to a wider market.

A case in point is Eataly in New York City. The 50,000-square-foot venue, which opened in late August to much fanfare, is billed as the largest artisanal Italian food and wine marketplace in the world. Overseeing the retail and restaurant complex are prominent restaurateurs Mario Batali and Joe and Lidia Bastianich, of the Batali-Bastianich Hospitality Group of New York, and Oscar Farinetti, who founded the first Eataly in Turin, Italy, in 2007.

Slow Food, an international educational organization that supports food traditions, is a strategic consultant to the project.

The sprawling food hall has an array of retail shops selling dry and fresh pasta, fresh produce and seafood, cured meats and cheeses, wine and other Italian delicacies. They are  interspersed with dining stations that have open kitchens and seating areas.

The typical station features a combi oven-steamer, fryer, grill, six-burner range, flattop and griddle, so customers rolling through Eataly with a shopping cart of gourmet goodies can easily pull over and dine at a cooking station such as Le Verdure, which offers a menu of Italian-style vegetable dishes and counter and table seating. A few steps further, and patrons can dine at La Pasta, which features pasta specialties, or Il Manzo, with traditional beef antipasti and other meat-centered dishes. Each station is a stand-alone operation serving a full menu.

“All of the kitchens are equipped to be full-blown restaurants,” said Eataly’s kitchen designer, Jimi Yui of YuiDesign Inc., based in Takoma Park, Md. “They have to be fully equipped because they are in the middle of a store, and there is a stampede of people around them.”

Helping Eataly turn out  authentic cuisine are imported Italian pieces such as pasta machines, bread and pizza  ovens and a dough mixer. The latter creates exceptional Italian breads, Yui said, because it mixes with a motion similar to the way bakers fold dough by hand — quite different from a spiral mixer.

Yui noted that the combi oven-steamers are particularly useful, both during service and for doing prep work, because of their versatile steam and convection cooking modes. In addition, they take up only 3 feet of room under the stations’ 15-foot exhaust hoods, making them space-efficient as well.

“We would not survive in these small kitchens without it,” Yui said.

At SD26, a stylish, contemporary Italian restaurant in New York City, veteran restaurateur Tony May predicted a growing role in the Italian kitchen for these fast and versatile combi oven-steamers and induction cookers.

He called the combi “probably the most revolutionary piece of equipment that has come out in the last 10 years.”

SD26 has three combis, two on the main floor and one in the downstairs prep kitchen. “We do almost everything with them  because you can regulate roasting and steaming and change very quickly,” May said.

He said that he considered installing ranges with gas and induction heat at SD26, but  because the space lacked sufficient electrical power, he went solely with gas.

“I think induction is the  future, although cooks still like to see flame,” May said. “I like it because it is clean heat and the whole surface is cooking space. You can do six or eight kinds of pasta at one time, if you want.”

“The power and efficiency and speed [at] which you can heat pans through magnetic induction is obviously more sophisticated now than it once was, so we take advantage of it,” Mackinnon-Patterson said.

Frasca’s induction units are portable modular ones useful as extra cooking stations for private parties or to help the kitchen crew finish prep work when the stovetops are full.

“You can pull them out at the drop of a hat, plug them in and start working,” Mackinnon-Patterson said.

At Vapiano, a nine-unit chain of fast-casual Italian restaurants based in McLean, Va., specializing in pasta, pizza, salads and panini prepared to order in minutes, patrons step up to a line of open induction cooking stations to place their orders.

There may be six, eight or 10 stations dedicated to pasta at a  Vapiano, depending on the sales volume of the store. At each, a cook prepares the order using an automatic pasta machine and an induction wok.

“The pasta we use is made fresh in the restaurant, not dried and hardened, so the cooking process takes only 120 seconds in the pasta cookers we’ve made for our concept,” said Vapiano president and founder Kent Hahne. “That’s a significant time savings compared to 500 or 600 seconds it takes to cook dried pasta.”

An automatic timer lifts the pasta out of the boiling water when its brief dip is over. The cook tosses it with sauce and other ingredients in the induction wok, which heats up quickly using magnetic energy.

“We started out using equipment that was on the market, but very early on we realized we were getting hit strongly at lunch hour, so we had to custom-design more powerful equipment,” Hahne said.