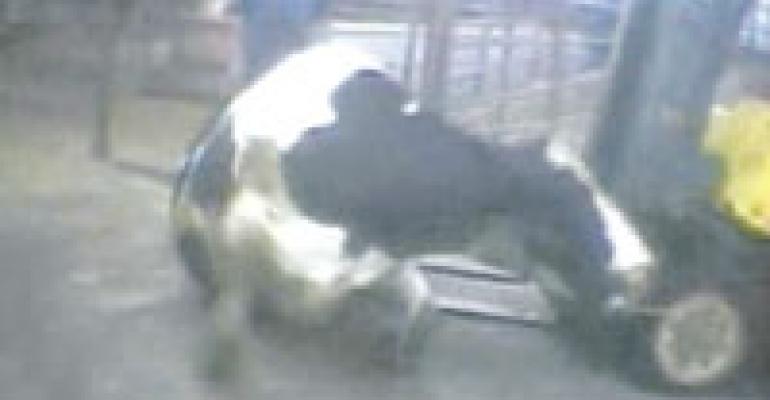 Foodservice industry experts are calling on the U.S. Department of Agriculture to step up its food safety efforts after federal inspection regulations were flouted at a California meat processing plant last month, resulting in the largest beef recall in U.S. history and dealing a blow to consumers’ confidence in the food supply.

The voluntary recall Feb. 17 of 143 million pounds of beef processed at Westland/Hallmark Meat Co. in Chino, Calif., followed an undercover investigation by the nonprofit Humane Society of the United States that found plant workers and government inspectors allowing downer cows—those too sick or injured to stand on their own before being killed—to be processed for human consumption, contrary to rule intended to protect against the transmission of mad cow disease. Officials said the beef had been in circulation since 2006 but posed little threat to human safety.

Nonetheless, the recall affected thousands of foodservice operators. California state officials in late February released a list of nearly 3,000 restaurants and businesses in that state alone that are believed to have received the recalled beef.

Included on the list were hundreds of local restaurants and units of national and regional chains, including Hooter’s, Sizzler, Bob’s Big Boy, Marie Callender’s and Norm’s restaurants. In addition, USDA officials speculated that 50 million pounds of the recalled beef was shipped to 36 different states for use in the National School Lunch Program. Shortly after the recall, the Jack in the Box and In-N-Out Burger chains announced that they would no longer use meat from the plant.

“I am really not impressed with the USDA’s communication on this,” said Steve Grover, vice president of food safety, quality assurance and regulatory compliance for Miami-based Burger King Corp., who noted that he had no concern about the safety of BK’s products. “It’s been very conflicting and very difficult to get the full story out of them quickly.

“How does this happen at a fully licensed operation with USDA inspectors and a veterinarian on site? If they need more staff, then let’s get more staff in the plants. This was a fully licensed, approved facility and major supplier to the school lunch program. If this was going on for as long as the USDA thinks it was, how could the inspector or the vet not see this going on?

“I think they need to have some answers and let the consumers and the industry know what they’re going to do going forward. We don’t want to hear about this two years after the fact.”

The cost of the recall to the industry will be extreme, said Mike Dunn, director of quality assurance for Sodexho U.S.A., the on-site foodservice conglomerate based in Gaithersburg, Md.

“I think a lot of food is going to be destroyed as a result of this and the cost will be exorbitant,” he said. “I couldn’t venture a guess as to how many pounds of food will be destroyed, but I think it will be in the hundreds of millions when all is said and done. And should it all be destroyed? I’m just not sure. I don’t believe there is a risk of mad cow, or BSE, with this product.”

Dunn said employees were instructed how to dispose of the meat by both Sodexho and its distributors. He added that while the first wave of the recall is over, he is concerned about secondary recalls of processed products containing the beef as an ingredient.

“What we have, as I understand it, is about 50 million pounds that went into the school lunch program,” Dunn said. “That leaves us with roughly 90 million pounds out there in the world somewhere, and this is where I believe the secondary recalls begin to take place.”

Members of the School Nutrition Association still are trying to determine how many schools have been affected by the recall and how to apply for reimbursement of the unused meat, said spokesman Erik Peterson.

“Right now [our members] are still identifying and destroying product and filling out the proper forms,” Peterson said. “A lot is still being figured out. Essentially, they would be reimbursed for destroying the product. The [lunch] program’s commodity entitlement allows for about 17 cents per meal and a lot [of schools] apply it to beef. We’re allowed to use the money to select from a list of available foods, one of which is ground beef.”

Peterson added that many parents expressed concern over the recall and the association sent home letters assuring them their children were not being served any of the beef.

“We’ve been transparent about anything we know about the product and are reiterating what the USDA said about this being a negligible risk to health,” he said.

At a Feb. 28 Senate subcommittee hearing on the recall, Sen. Tom Harkin, D-Iowa, blasted Secretary of Agriculture Ed Schafer for the USDA’s failure to be more forthcoming about the problems at Westland/Hallmark.

“I think we do a disservice to our own honesty and truthfulness if we can’t level with the American people,” Harkin said. “If you are there saying absolutely, Mr. Secretary, that that food was safe, why did we have to recall 143 million pounds of meat? The fact is we don’t know if those animals we saw being scooped up by a forklift were sick or not.”

Schafer said his department is short about 500 inspectors and that no inspector was on Westland’s premises when the Humane Society conducted its investigation. He added that if an inspector had been at the plant, it would have been suspended immediately.

“So you leave it up to the company to call a veterinarian or inspector?” Harkin asked. “Talk about the fox guarding the hen house. We need to ensure we have on-site inspectors in these facilities. The safety of our food requires that. The American people deserve that.”

Replied Schafer: “We’ve taken this seriously. That’s why we demanded the recall. You are right that the Humane Society brought this to our attention and that was wrong. Our investigation will lead us to why it happened and what corrective matters need to be taken so it never happens again.”

The National Restaurant Association recently set up a conference call with concerned members as well as officials of the American Meat Institute and the National Cattlemen’s Beef Association.

“Obviously, when we see an incident like this, it is of concern,” said Mike Donahue, the NRA’s vice president of media relations. “Restaurateurs want to make sure the food they’re bringing in is healthy, so information is very important in a situation like this.”

Burger King’s Grover asserted that as far as his chain’s “products go, there’s no issue whatsoever where safety is concerned.”

In addition to adhering to federal safety regulations, Burger King has its own program, including an unannounced third-party audit of its processing plants that focuses on both food safety and animal welfare, Grover said.

Burger King also has implemented an in-house sampling program for all products that is enforced at every level. The audits, Grover continued, take two to three days each and consist of a review of all records, including USDA history, and a comprehensive check to make sure that all suppliers are on the company’s approved list.

“It’s a robust program that ensures safety at all of our restaurants,” he said. “Because we’re a large purchaser of beef, we have a lot of control of our system.”

Grover also noted that in the wake of the Westland recall, Burger King is working on a re-audit of its suppliers to make sure it is not affected by other possible recalls in future.