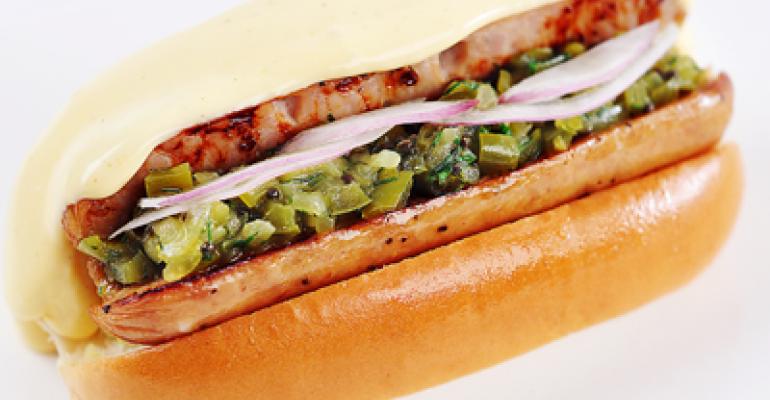 Many innovative hot dogs are sweeping the nation, but chef-owner Angelo Sosa’s creation at this independent casual-dining restaurant is an unusually deft and subtle combination of Asian and Western flavors.

Sosa makes a green pepper relish by sweating onions and then adding chopped green Thai birds-eye chiles and green bell pepper, which he seasons with turmeric, salt and sugar. He deglazes that with vinegar and finishes it with dill.

Once the cheese has melted he adds togarashi spice and sake and emulsifies it all in a blender.

To assemble the hot dog, Sosa toasts a sliced, elongated potato roll and lines it with shredded iceberg lettuce.

He places a butterflied chicken apple sausage in the bun, fills the sausage cavity with the pepper relish and pours the cheese sauce on top. He garnishes the dog with finely sliced red onion and sells it for $8.