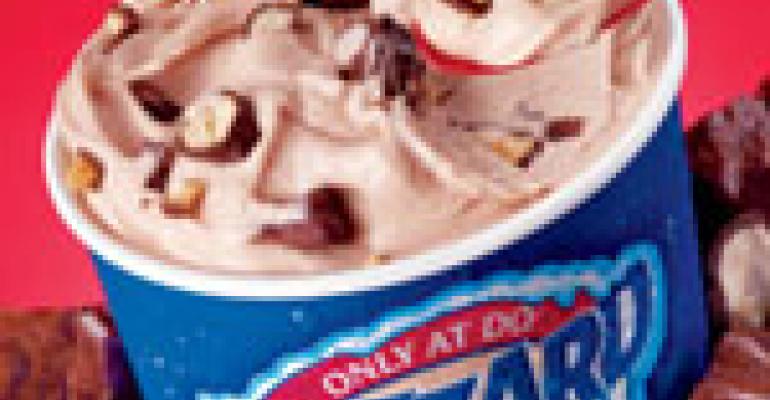 Leading ice cream chains are gearing up for their peak promotional season, and marketing executives say they’re confident that consumers who are trying to watch their spending in a bleak economy won’t cut back on treats.

Popular promotions from last year are returning as one way to ensure strong sales, but chains also are planning product introductions and special events to build traffic.

Product quality is the key to getting consumers to buy ice cream even if they’re cutting back on other items, the executives say. Value tactics and co-brand alliances also are in evidence, as with Baskin-Robbins’ currently featured flavors boasting bits of big-name candy bars, and a chain-wide fundraiser for fire charities next month, with 31-cent scoops as customer lures.

The nearly 1,400-unit Cold Stone Creamery, based in Scottsdale, Ariz., has changed its ad strategy and is focusing on products instead of the customer experience, which was emphasized in humorous ads last year. Consumers told the chain that “although the spot was funny, it didn’t necessarily drive them to purchase ice cream,” said Suzanne Schutz, Cold Stone’s senior director of marketing.

Cold Stone broke a new campaign this month focusing on the “cravability” of its mix-ins and the customization they enable.

Interviews with consumers confirm that the mix-ins are the main reasons they visit Cold Stone, Schutz said.

The campaign, by Santy Advertising of Phoenix, also tells customers they can create their own ice cream cakes with mix-ins. Nearly half of the chain’s customers did not know Cold Stone sells cakes, Schutz said.

The chain has increased media spending by 5 percent this year to reach its target market of women 18 to 45 years old, she said.

Although Cold Stone is in the premium category, its price points start at $1.50 for a child’s cone. A value plan allows a family of four to buy ice cream for $9, and Schutz doesn’t believe families will cut back on treat spending.

“Everybody loves affordable indulgences,” she said.

“We’re lucky we’re in the superpremium category,” she said. “When people want to indulge, they want the best. They want that special treat. Going to an ice cream store is an occasion and a cheaper activity than a movie or dinner.”

“It’s a pretty historic Blizzard,” he said. “It’s never been done before.”

Other products will be featured in May and August, but the “really big thing in the peak season” will be DQ’s North American Miracle Treat Day, with Blizzard sales benefiting Children’s Miracle Network.

Despite the current economic malaise, “as it applies to ice cream or frozen treats, fortunately, the thing that drives the business is weather and impulse and craving,” Keller added.

In any case, Canton, Mass.-based Baskin-Robbins has a “recession buster” ready in the form of the “31 Cent Scoop Night,” said Scott Colwell, vice president of marketing for the 6,000-unit division of Dunkin’ Brands Inc. B-R’s U.S. units will sell the 31-cent scoops from 5 p.m. to closing April 30 to aid the National Fallen Fire-fighters Foundations, which received $100,000 from last year’s event.

The Wilbraham, Mass.-based Friendly’s family-dining chain is preparing to roll out new flavors and creations for the summer, and “we’re even thinking of an idea with ice cream for breakfast,” said vice president of marketing Skip Weldon.

The creation of product-focused ads for summer, by Friendly’s new agency, Zimmerman Advertising of Fort Lauderdale, Fla., “really pushed to focus on ice cream as the core strength of the brand,” Weldon said.

“Consumers aren’t ready to give up a quality experience,” he said. “If Friendly’s can still deliver [that], we’ll succeed in this really challenging environment.”