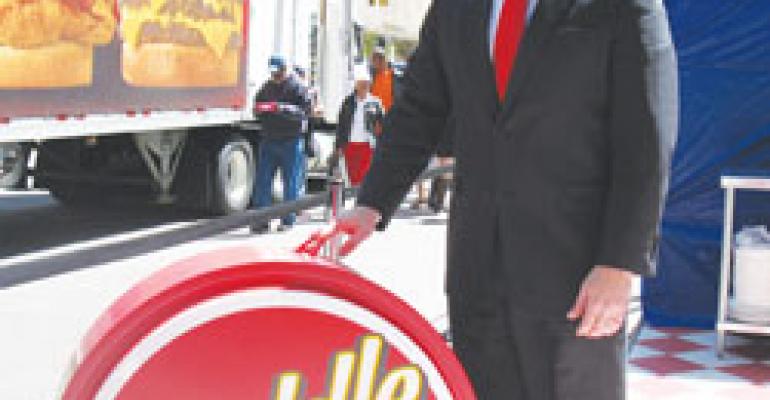 Huddle House to revamp its restaurants

The 400-unit Huddle House is redesigning its restaurants with a new diner-like look, a revamped logo and a larger menu.

Chief executive Phil Greifeld, who unveiled the new look Friday at an event in New York, said the changes would enhance and modernize the 46-year-old brand.

The new restaurant format has a bigger footprint of around 4,000 square feet and 150 seats, which is double the size of a traditional Huddle House unit. Remodeled restaurants will feature better technology to improve throughput time, more cost-efficient kitchen equipment, and better seating and lighting, Greifeld said. He described the new look as the relaunching of the classic American diner.

“The store will still resemble the 24-hour diner [design], but will be a little more cafe-like,” he said. “We’ve spent a lot of resources -- time and money -- on what we think consumers are looking for, the special touches that will make them feel more comfortable.”

Greifeld declined to say how much money the company invested in the redesign, which has been in the works for more than two years, but he said it is important to “always look at new ways to grow your company even during a recession.”

Huddle House will introduce the redesign this year and expects to complete the systemwide rollout in 2011. The first restaurant to feature the redesign will be located at the Fort Benning Army base near Columbus, Ga., where construction is expected to begin within the next few weeks. There also are plans to build at least two other franchised units this year, he said. Atlanta-based Huddle House currently operates in 17 states, primarily in the Southeast, Midwest and Southwest.

In addition to the new look, Huddle House also has reworked its menu to feature more menu items at every daypart. Greifeld said the number of breakfast menu items increased by 30 percent, and lunch and dinner selections grew between 40 and 45 percent. New breakfast items will include French toast and a variety of pancakes, including chocolate chip, blueberry and maple flavors. And lunch and dinner additions will include such comfort foods as pot roast and roasted chicken. Classic milkshakes also will be available.

“We did a lot of research, looked at younger, older male and female customers and found that most of them wanted to see a breadth of offerings in all dayparts,” Greifeld said. “Drilling down specifically, they said they wanted more homestyle offerings.”

Greifeld said menu prices would not be increased.

Also new at Huddle House is a redesigned logo that puts more emphasis on the word "huddle" and less on "house." The new logo also features artwork depicting a knife and fork, the universal language for food, he said.

Greifeld said the new logo reflects how many of the chain's customers shorten the name.

“We’ve taken the opportunity to reengineer the demand for our concept,” he said. “There is a lot of brand equity in Huddle House. Many of our customers refer to us as 'The Huddle.'"

While many family-dining restaurants, such as Denny's, IHOP and Friendly's, have experimented with fast-casual extensions, Greifeld said Huddle House has no plans to follow suit.

“Fast casual is not part of our plan at this juncture,” he said. Everything we’ve done so far has put us in a good light with our customers. What we’re doing now is something to further enhance our brand. Our franchisees are pleased with it.

"We’re not going to turn our backs on 46 years of successful history with the Huddle House brand," he continued. "We don’t want to mess with that, but it is important to change what needs to be changed.”