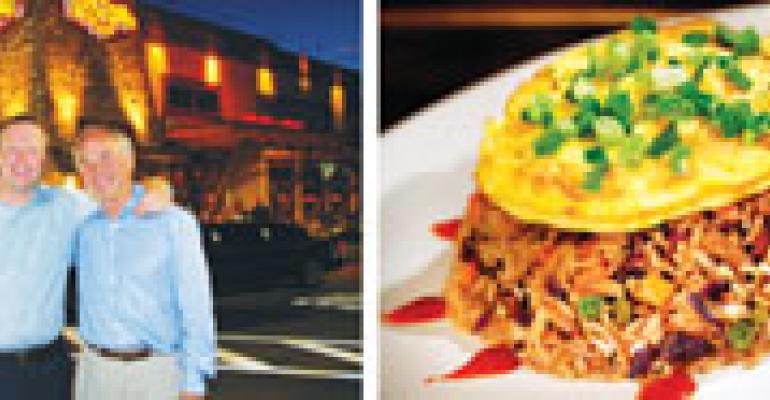 If Chris Simms were one of the canines photographed on the walls of his Lazy Dog Café restaurants, he’d be a young lab, sprinting for that metaphoric tennis ball of high-volume sales while others in the casual-dining pack remained chained in the yard by the ongoing recession.

Spend a little time at a Lazy Dog unit, with its clever four-legged references—from the bone-shaped mints at the door to the fire hydrant-shaped beer taps—and it’s easy to fall into the spirit of the place.

The four-unit, Huntington Beach, Calif.-based chain, which boasted $16.5 million in sales in 2008, has its fifth location under construction and two more scheduled to open before next summer, all in high-volume mall locations throughout Southern California.

Simms envisions a regional chain with national potential, much like the 140-unit Mimi’s Café, which his father, Thomas Simms, founded in the late 1970s. The elder Simms grew that chain to 81 units before selling it to current parent Bob Evans Farms Inc. for $182 million in 2004.

Thomas Simms is now a partner in Lazy Dog, along with other members of the restaurant-focused family, which also owns The Kettle restaurant in Manhattan Beach, Calif., and The French Quarter in West Hollywood, Calif. Chris Simms’ younger brother Mike this summer is scheduled to open a new concept called Tin Roof Bistro in Manhattan Beach, and the two brothers also opened Simmzy’s, a craft beer-focused venue nearby.

Meanwhile, Chris Simms, as Lazy Dog’s principal, has built the chain’s infrastructure with former Mimi’s executives, including Dan Dillon as president and Roshan Mendis as director of operations.

Lazy Dog is a something-for-everyone casual-dining concept that appears to have carved out a niche offering quality food at a price point carefully positioned below upscale-casual competitors The Cheesecake Factory and P.F. Chang’s China Bistro, but above such lower-end brands as T.G.I. Friday’s or Chili’s.

“Lazy Dog Café has a unique winning formula that many casual-dining chains can’t figure out,” says Nancy Luna, a business writer for The Orange County Register and writer of the paper’s Fast Food Maven column. “It appeals to men who like to drink craft beer while watching their favorite sporting event on plasma TVs, while women love the superb food and atmosphere. It’s also a great place to take kids. That’s a tough formula to crack.”

Perhaps most importantly at a time when consumers are cutting back on dining out, Lazy Dog is “a great bang for your buck,” Luna says. “It’s not cheap food, but for the quality of the food you are getting, it’s a bargain.”

He set out to create a concept with a broad, no-veto menu that still stands out as cutting edge within the segment. Chris Simms brought in as corporate chef and partner Gabriel Caliendo, a former banquet chef for the Ritz-Carlton Hotel in posh Laguna Niguel, Calif.

Caliendo says his challenge was moving from a world of foie gras and caviar to one of more simple ingredients that had to be priced reasonably yet still differentiate the brand.

The result is an eclectic menu that includes Asian dishes, such as Ginger Soy Salmon and wok platters with a choice of protein; comfort foods such as meatloaf and pot roast; Mexico-inspired chipotle chicken burritos and shrimp ceviche;and a line of pizzas and pastas.

Portion sizes are healthy, though the company is expanding its small-plate options and offers some entrées in half portions.

Early on, Thomas Simms argued that such dishes as Wok-Fired Calamari over rice with a sweet soy plum sauce or a trio of hummus dips with flatbread and vegetables would never sell in the casual-dining world.

Now both are among the chain’s topselling appetizers, Caliendo notes, and the menu continues to evolve.

“Their challenge was to do something for everyone and do it at a reasonable price, and they’ve hit a nice niche there,” he says.

Where The Cheesecake Factory’s similarly eclectic menu includes more than 200 items, Lazy Dog limits the menu to around 100. The average check is about $12 without alcohol, and $16 with alcohol, Chris Simms says.

The dining room is airy and modern, with floor-to-ceiling black-and-white photos of dogs lining the walls. Most also allow guests to submit photos of their own pets, which are rotated in a collage near the entryway.

All feature an exhibition kitchen, a bar area with big-screen TVs and outdoor patio space with fire pits or fireplaces where—not surprisingly—guests with dogs are welcome.

The bar is also an area where Chris Simms aims for innovation. Most recently he has added a caipirinha, a cocktail more commonly found at high-end lounges.

Chris Simms admits the Brazilian drink may go the way of the single-malt whiskeys and bourbons he also recently tried to add, only to learn that Southern California diners prefer their more typical lineup of vodka martinis and margaritas.

Still, Chris Simms remains a stubborn believer that if his diners taste some of the more exotic items, they will be sold.

Lazy Dog also offers a short but adventurous wine list, as well as 21 beers on draft, including five proprietary beers brewed locally and bottled beers such as organic Deschuttes Green Lakes Ale out of Oregon.

Sales have dipped somewhat this year as consumers cut back, Chris Simms says.

“But we’re OK with that, as long as we’re making the right decisions,” he says. “We want to increase the value to guests, rather than using discounts.”

The chain’s most recent unit to open in Thousand Oaks, Calif., was the first ground-up build, and Chris Simms says it cost about $4 million to open the doors.

As the company grows, company leaders plan to bring on market partners for each unit, but there are no plans to franchise.

After the next three units open, the Simmses plan to put growth on hold for the rest of 2010 to catch up. In 2011, Chris Simms says the chain will look to open two or three each year going forward.

Chris Simms credits the company’s success to its focus on execution.

“The restaurant business is complicated, but it really comes down to food, service and ambience,” he says. “I think there are lots of restaurants that can be successful with one or two elements, but not many achieve all three. I think we do that.”— [email protected]

To read more about this year's Hot Concepts! Award winners in a downloadable PDF format, visit RetailNet to purchase the full report.