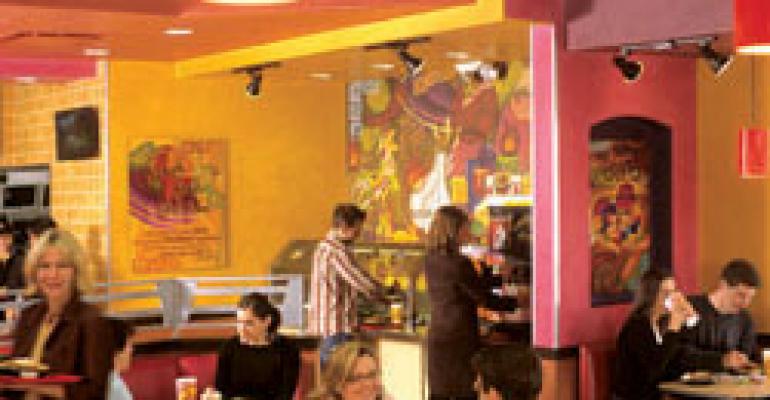 Growth concepts pick up the pace

If fast-casual restaurants remain true to the practices that have made them a growth segment, they will gain market share in the coming years despite competitive pressure from quick-service chains that have encroached on their territory, fast-casual executives say.

Fast-casual dining has grown rapidly during the past 10 years, luring customers from casual-dining and quick-service restaurants with high-quality meals, prompt service for time-crunched consumers and prices diners don’t mind paying, given the caliber of the food.

The fast-casual segment had annual growth of more than 14 percent in 2006, compared with about 6 percent for the U.S. chain restaurant industry at large, according to the Top 100 Fast Casual Chain Restaurant Report by Technomic Inc., a Chicago-based foodservice consulting firm.

Sales for the segment are an estimated $15 billion, according to the report.

The segment appeals to budget-conscious consumers who trade down from higher-priced casual-dining chains and those who trade up from quick-service chains to enjoy what Technomic calls “small, affordable luxuries” for just $2 to $4 more.

Still, some signs are pointing to a weakening of the segment’s robustness. In 2001, 58 percent of consumers said they would “definitely” visit a fast-casual restaurant, but that number fell to 49 percent last year, according to The NPD Group, a global market research firm based in Port Washington, N.Y.

Such quick-service chains as McDonald’s, Burger King and Wendy’s have been revamping their menus to offer diners more menu options and improving their decors to mimic the fast-casual ambience. If that movement becomes more widespread, fast-casual restaurants are in danger, says Karen Eadon, chief marketing officer for Irvine, Calif.-based El Pollo Loco.

“As QSRs continue to improve, what becomes fast-casual’s reason for being?” she says.

Fast-casual chains that get complacent and allow food quality, speed of service and restaurant decor to deteriorate “will find out they’re making a big mistake,” Eadon says.

El Pollo Loco, which operates and franchises 380 units, has expanded outside of its core West Coast market and will continue to grow because of its “very unique positioning,” she says.

The chain’s signature item is citrus-marinated, flame-grilled chicken, which it uses for a number of menu items.

El Pollo Loco plans to open 50 restaurants in the Atlanta market over the next six years and will open a Boston location later this year, Eadon says. Other openings are planned for New Jersey, New York and Virginia.

Site selection has to be approached carefully to ensure that the restaurant will thrive.

El Pollo Loco looks for markets where restaurant use is heavy and diners show “some sophistication of palette,” she says.

“Some concepts probably run into trouble when they locate in trading areas that might not support the concept,” Eadon says. “A lot of fast-casual concepts will do well in upscale, urban areas and can’t do so well in areas that are a little more average or below average in terms of income.”

If anything will limit the long-term growth of the segment, it’s the availability of markets compatible with fast-casual concepts, says Darren Tristano, executive vice president of Technomic Information Services.

“They can’t go everywhere,” he says. “You can put a McDonald’s almost anywhere, but when you’re thinking about fast-casual, you really have to go to a very affluent area to find a Chipotle or a Panera.”

With the rise of high-end strip malls and “lifestyle centers” that cater to more affluent consumers, fast-casual concepts have an opportunity for expansion that they didn’t have before, Tristano says.

Or they can expand overseas, as Boston-based Au Bon Pain is doing in Thailand, Japan, the Middle East and North Africa.

“Au Bon Pain’s roots are in the urban market,” says president and chief executive Sue Morelli. “When you look around the world, what you see in most countries is that the population resides largely in urban centers.”

Au Bon Pain has more than 200 units in the United States and abroad, and the chain has been successful overseas because “it’s a natural in most countries,” she says.

Morelli acknowledges that fast-casual concepts are feeling pressure from quick-service chains in terms of menu offerings and decor.

“Look at McDonald’s,” she says. “They are probably the poster child for this whole thing.”

Years ago no one would have imagined McDonald’s serving the salads and premium coffee it does now in restaurants that have more upscale designs and WiFi, Morelli says.

“We would say the lines are blurring more and more,” she says. “It will always be survival of the fittest. It think it’s inevitable that everyone will follow the trend of what consumers are looking for now.”

Au Bon Pain is attempting to stay ahead of the trend by anticipating what consumers will want next, says Ed Frechette, vice president of marketing.

“Our entire line of soups has dropped sodium levels in the past year,” he says. “We were one of the first to remove trans fats.”

Offering food with ethnic themes is one of the steps fast-casual chains are taking to ensure their continued growth, Frechette says.

“I think what you’re seeing is more specialization as opposed to one size fits all,” he says.

He compares the state of the segment to the evolution of bagel chains, which started out offering nothing more than bagels.

“The first bagel company owned the market, and then you saw specialization, and you’re seeing the same thing with fast casual,” he says. “Just selling good food to go is not enough anymore.”

It’s not, particularly given that good, fast service also is an important part of the appeal for consumers drawn to fast-casual restaurants. But it’s getting harder to find good employees to provide that service, which is one of the hurdles to growing successfully, says Steve Romaniello, president and chief executive of Atlanta-based Focus Brands.

“The biggest issue is finding qualified labor,” he says. “It is a very tight labor market. In some areas where we operate there’s 2 percent unemployment. The base of labor is changing, particularly with the younger generation. They’re not keen on working hard.”

Focus Brands is the franchisor and operator of the 360-unit fast-casual Moe’s Southwest Grill, as well as Schlotzsky’s, Carvel and Cinnabon.

Moe’s is expected to grow to 395 units by the end of the year, driven by “an excited group of franchisees” who are opening multiple units, Romaniello says.

The growth strategy is to fill in trade areas where a Moe’s already operates by adding new restaurants, Romaniello continues.

Although the segment is experiencing robust growth, Romaniello is “clearly worried about” a proliferation of brands in each food category that could increase competition in the coming years.

“There is a large number of players who are trying to either enter this space or modify their concepts to enter this space,” he says. “My guess is that there will emerge in the categories a number of key leaders and some regional concepts, and some will drop out because the competitive set will be so big.”

Romaniello says that even though the segment is being squeezed by quick-service chains, “natural barriers” in the form of decor and floor plans will prevent some quick-service restaurants from transforming themselves into fast-casual concepts.

“I just can’t see what Subway can do to morph themselves into a Panera Bread store,” Romaniello says.

Zaxby’s, based in Athens, Ga., will open its 400th unit in October and plans to add 11 or 12 more by the end of the year, says chief operating officer Robert Baxley, who’s optimistic about the future of his chain and other fast-casual players—provided they “live by our principles.”

“The biggest thing we do is keep the guest at the center of what we do,” he says. “We’ve always stayed true to the roots that got us here.”

Although quick-service chains are encroaching on the segment with more upscale menus and decor, Baxley says fast-casual’s strength in offering fresh, more nutritious food in pleasant surroundings and at a good price will continue to grow the segment.

“We really don’t see a limitation from that aspect,” he says, but the segment is starting to fill up with too many similar concepts.

“Some of these guys are overcrowding those niches a little bit,” Baxley says. “They have to be very cautious. How many more burrito places can you have?”

Zaxby’s can grow successfully and weather competitive pressures because of its strategy for expansion, he says.

“The big difference for us and other folks is they use a shotgun approach,” Baxley says. “We work out from our core and expand. The brand recognition doesn’t trail us. Picking locations near inter-states and colleges, that’s the best thing you can do. People are transient. We’ve been able to be successful by leveraging that opportunity from day one.”

As commodity prices and labor costs rise, he says, some brands are cutting corners by buying cheaper products and reducing their work forces, which will hurt them in the long term.

“The people who won’t weather the storm are those who cut labor and quality,” he says. “That will separate the real players from the pretenders.”

So will a strong marketing effort, according to Linda Duke, chief executive of Duke Marketing, based in San Rafael, Calif.

“One of the things I was totally blown away by is that the area that needs the biggest help is marketing,” she says.

Some restaurant managers do a good job of marketing to the communities around their stores, Duke says, but many others are lagging in this area.

“They’re really not doing a lot of communication,” she says. “There’s a big opportunity to improve.”

Duke sees a shake-up coming in the segment, with weaker brands falling by the wayside. For those chains that market effectively, she says, “your brand will stand out.”

Local store marketing, including direct mail and community involvement, is the best way to sustain the viability of a concept, says David Wolfgram, chief executive of San Francisco-based Forklift Brands.

“The quick-casual trade area is so small that it’s the most cost-effective way to grow the business,” he says.

“I certainly see us reaching 200 units, if not more,” he says. “We have no intention of staying small.”

Although a recent survey by RBC Capital Markets found that 54 percent of consumers concerned about an economic downturn plan to eat out less often in the coming months, Wolfgram says fast-casual restaurants won’t be affected as much casual-dining restaurants will.

“The value in the [fast-casual] segment will come out during a recession,” he says. “The price point is low. You don’t have to tip. As long as the food carries well and you can execute high-quality foods quickly, the segment will work.”