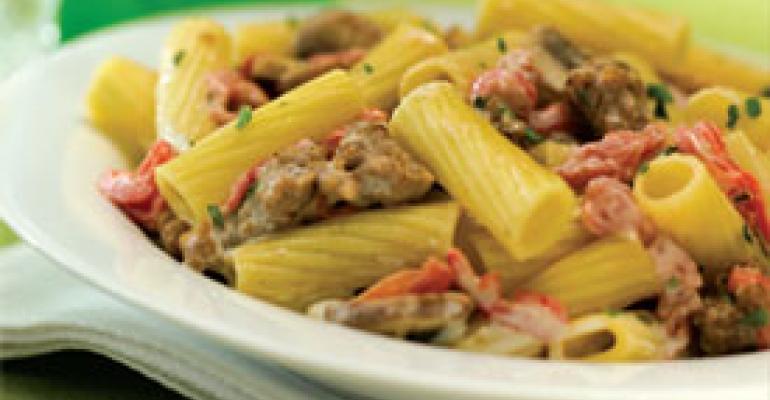 In the winter of 2003, neighbors of restaurant industry veteran Russell Bry might have wondered why, several times a day, he dashed from his two-car garage to his house 50 feet away—through snow—carrying piping hot pizzas, pasta dishes and all manner of Italian food.

Bry and three longtime business colleagues had set up a commercial oven in Bry’s Chicago home in the spot where he usually parked his car. They spent a year developing a menu and kitchen regime for the fast-casual Italian franchise chain they envisioned. It would be called Go Roma Italian Kitchen, and the team aimed to offer full-service-quality food for about half the price and cook it in just a few minutes.

The foursome so believed in their concept’s potential that they resigned their executive-level positions at restaurant industry powerhouses Lettuce Entertain You Enterprises and Brinker International that year in order to found Go Roma.

“There were a lot of Asian options, a lot of bakery and café options, and Mexican options, but very few Italian options on a national level for quick casual,” says David Wolfgram, who is co-founder of Go Roma Italian Kitchen and the chief executive of its parent company, San Francisco-based Forklift Brands.

Wolfgram was president of Corner Bakery Café, a fast-casual concept he co-founded while he was a vice president and managing partner at Lettuce Entertain You. Brinker later acquired and then sold the chain. In his years with Lettuce Entertain You, he had worked with Bry, who developed menus for numerous franchise concepts there.

At Lettuce Entertain You, they also had worked extensively with Jorgo Koutsogiorgas, who at the turn of 2003 was vice president and chief people officer of Maggiano’s Little Italy, a full-service Italian concept Wolfgram had co-founded at Lettuce Entertain You and which Brinker also acquired.

Jeff Drake is the fourth Go Roma co-founder and partner. When he left Brinker, he was the eastern regional director of the Corner Bakery Café.

During the preceding decade, the four friends had watched the growth of the fast-casual segment via the rapid expansion of the Corner Bakery Café chain. The fact that they saw little in the way of quick-service Italian led them to make their move.

“It was a leap of faith that we all took, but we believed what we were setting out to do with Go Roma,” Wolfgram says.

The partners used their own money to found the company. The first Go Roma opened in the spring of 2004 in Warrenville, Ill. The concept offers classic Italian cuisine such as pizza, pasta and sandwiches, although some of their signature items such as Smoked Chicken and Pear Salad have become favorites.

Customers order and pay a cashier before taking a seat. The kitchen is organized so each item can be cooked fresh within three minutes and zipped out to the table, Bry says. The only dish entirely premade is lasagna, and entrée prices fall within the typical fast-casual range of $7 to $8.

“Companies like this are the future of fast foods,” says Rhonda Sanderson, founder of the Chicago-based Sanderson & Associates Ltd., a public relations firm specializing in franchise growth. “People want the convenience of fast food, but they don’t want it to taste like it. They want to know that there is actually a chef back there and don’t want to remember they are in a chain.”

One reason it took a year to perfect the menu was the need to nail down speedy, cost-effective ways of food preparation.

During that winter in Bry’s garage, cold weather slowed things down. It was sometimes so cold that their commercial oven would not function. So he bought a 20-gallon propane tank and heater.

“Instead of preheating the oven, I had to preheat the garage first,” Bry says.

Ultimately, Bry and his partners emerged with a food preparation system easily replicable for franchises, which Wolfgram says is an important part of the growth plan.

Food can be made so quickly because of such steps as preroasted and preportioned vegetable garnishes and pre-blanched pastas. Bry also mentions “creative butchering,” meaning chicken pounded thin, and salmon sliced at three quarters of an inch for quick cooking. Go Roma’s pizza, baked in an impinger oven, is ready in 2.5 minutes.

There are no waiters. When a dish is ready, a ticket prints up in the kitchen telling a food runner where to bring it. With Go Roma’s custom-designed payment system, customers in a group can all pay separately at the cashier, find their table, and all be served at the same time.

“It sounds like a little thing, but if you get served and the other person doesn’t have their food, you don’t want to start eating and your food starts getting cold—it really impacts the dining experience,” Wolfgram says. “We wanted to prevent that from happening.”

Customers can also ask the cashier to time the arrival of courses at their table. For example, they can have the entrée served eight minutes after the salad arrives.

With no waitstaff, Bry says that Go Roma has probably half as many employees as full-service restaurants. The partners also have been careful to avoid costly rents on their locations. That helps to explain how the company can sell full-service-quality food at quick-service prices, he says.

Seven Go Romas have opened in Greater Chicago, plus one in northern Indiana. The ninth location is slated to open in Tustin, Calif., in September.

That restaurant will see the unveiling of Go Roma’s redesigned signage and the company’s new tagline. Wolfgram says that some prospective first-time customers, when they encountered a Go Roma, couldn’t quite tell if it was full service or quick service. Therefore, under the words “Go Roma,” the logo will henceforth read “Real Easy Italian” instead of “Italian Kitchen,” erasing any question.

Growth will be slow through next year as Forklift evaluates which markets it wants for corporate-owned restaurants and where it would like franchises. There already is strong interest from potential franchisees, though Forklift does not expect to start signing agreements until early 2008. In following years, 10 new Go Romas a year are expected to open.

Wolfgram’s relationship with GESD Capital began not long after that firm acquired Boudin in 2003. Louis J. Giraudo, a GESD partner, says he and his colleagues had met Wolfgram in passing over the years and were aware of his accomplishments at Lettuce Entertain You and Brinker. After Wolfgram resigned from Brinker, GESD engaged him to join Boudin’s board. The creation of Forklift and its funding arrangement with Go Roma soon came about.

“What attracted us is the professional team of David Wolfgram and the guys he has worked with for many years,” Giraudo says. “We thought their concept would be a winner, and it has performed as we’ve opened new locations. We’re very pleased with it.”