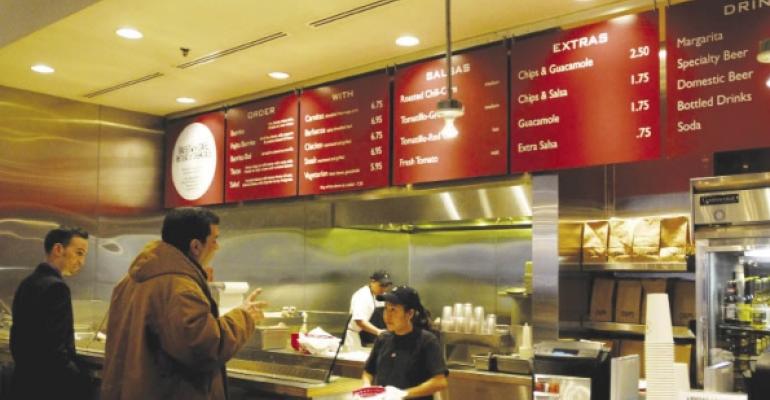 Limited or large, targeted menus let customers have it their way

and Fries, Qdoba Mexican Grill, Smashburger and Pie Five Pizza Co. has sparked a resurgence in the kind of pared-down menus quick-service brands like McDonald’s, Burger King and Wendy’s fielded in the 1960s and 1970s.

But this new wave of players does not cling strictly to menus that are “free from choice.” Many manage to live in both worlds by allowing patrons to customize their own orders — employing a more diverse “have-it-your-way” strategy than the quick- service brands were ever able to implement.

To be sure, West Coast icon In-N-Out Burger was a forerunner of this new breed with a high-unit-volume quick-service model like McDonald’s, but with a handful of menu items and secret slate of customization options.

However, chains like Chipotle, its Asian sibling ShopHouse Southeast Asian Kitchen, Qdoba, Five Guys and many other fast-casual brands have ratcheted up the customization angle.

Dennis Lombardi, executive vice president of Columbus, Ohio-based WD Partners, said that even if a restaurant has only a few base menu items, consumers will still perceive a high degree of choice available if they can personalize the few options they have.

“Even if a fast-casual [chain] has a limited menu, the customer has already preselected the cuisine. So if they want Mexican, they’ll go to a Qdoba,” he said. “That’s why those chains get so much credit for menu variety. … Building the customer’s order in front of [the individual] means variety to that person.”

Fine-dining chef-restaurateur Waldy Malouf recently opened High Heat in New York, a fast-casual concept that specializes in both upmarket wood-fired pizza and hamburgers. The month-old concept offers only a handful of menu selections, but emphasizes its “ingredient-driven” positioning, in which customers have the option to add a wide range of toppings to both the burgers and the pizza.

While some experts caution that customization can slow down service, others report the opposite. At Pie Five Pizza Co., an offshoot of Pizza Inn, the buffet-centered chain based in Plano, Texas, Madison Jobe, senior vice president and chief development officer, said allowing customers to choose their toppings has sped up service.

Letting guests order their own pizzas rather than share one with friends — and possibly argue over topping choices — has reduced guest order times, he said.

“Most of the pizzas ordered have just one or two toppings anyway,” he said.

Adam Fleischman, owner of Los Angeles-based Umami Restaurant Group, agreed that consumers are responding to the customization trend but stressed that ingredient quality matters above all.

“You could take Chipotle’s same model, dumb it down and buy cheap, but it wouldn’t have the same effect,” he said. “We’re getting the first taste of what high-end customization really looks like.”

And less of more

However, customization is not necessarily a magic bullet for fast-casual operators — nor does it work in all cases. Fleischman’s 800 Degrees pizza restaurant allows for personalized pizzas to be cooked quickly, but his 12-unit Umami Burger chain stresses “no substitutions” because the seven signature burgers offered there need to be built just so to have the “umami” taste profile.

In the meantime, operators must continue to weigh whether less is more or, indeed, whether more is more when it comes to refining their menus.

Granite City Food & Brewery is looking to sustain its momentum with guest counts — which were up 5.5 percent in the first quarter — by improving customer service and food quality, and slimming down the menu makes that easier operationally, said Rob Doran, the chain’s chief executive.

Doran, a former McDonald’s executive, said Granite City needed to thread the needle by reducing the menu’s size while maintaining its sense of variety, a major draw with its frequent guests.

“Coming from McDonald’s, I would always look for iconic products like the Big Mac, but what surprised me about Granite City was that the icon was the menu variety,” Doran said. “Customers said they come here because of that variety. So we’ve taken off some of the bit players and made sure our best-sellers are the best-prepared items.”

Sandwich specialist Così also has begun paring down its menu as part of its turnaround effort under new chief executive Carin Stutz. In February the brand hired as a consultant Brad Blum, a longtime industry executive and menu specialist who called on Così to trim its menu while he tried to become chief executive before Stutz’s appointment.

Stutz said during an interview with Nation’s Restaurant News that she wants Blum to follow through on that vision for the menu.

“Obviously, Brad has a passion for food,” she said, “so I’ve asked him to wrap his arms around our culinary team and see what we can do from an innovation and simplification standpoint to make it an easier guest experience.” She said the chain has reduced its menu by about 15 percent this year, with further streamlining yet to occur.

Nevertheless, many chains continue to pursue a policy of menu augmentation as they position themselves in a changing marketplace.

For example, menu development among McDonald’s and other quick-service chains looks like an arms race, with brand executives insisting that tactical, targeted menu items are driving the buildup.

McDonald’s, for its part, recently added another price tier, the Extra Value Menu, to fit between the Dollar Menu and its combo meals, while launching limited-time offers of Spicy Chicken McBites, Blueberry Banana Nut Oatmeal and the Cherry Berry Chiller beverage. Those items — in addition to perennial limited-time offers like the McRib and Shamrock Shake — might crowd menu boards. But they keep consumers’ interest without stealing share from flagships like the Big Mac and Chicken McNuggets, which still generate most of McDonald’s sales, said global marketing officer Dean Barrett.

“The key for us is to make sure we’re customer-driven in menu development,” he said. “We use limited-time offers and new full-time products like large wraps in Europe or beverages in the United States to get the right combination of events that fit around seasonality or the holidays. Then we always have a stable of strong core menu items that we continue to market and promote.”

Rival Burger King revamped its menu this year to reflect the style and scope of McDonald’s offerings, and thus far has grown sales. Its same-store sales in North America rose 4.2 percent in the first quarter.

Checkers Drive-In also has expanded its menu incrementally, adding products like chicken wings or Cold Creations desserts, but only when research determines that they would fill a need for the core customer, said chief executive Rick Silva. The items must have the flavors guests want, he said, but also must play to Checkers’ and sister chain Rally’s strengths for value and drive-thru convenience.

Lombardi said that even the most prolific menu developers must counter their expansion with a drive to limit offerings to what is most profitable or popular.

“What you always want is some sort of pipeline that keeps your menu current and fresh so frequent users stay interested,” he said. It’s well proven that having too many items on the menu can overwhelm the guest, he continued. “The touchy part is: When do you reach that with your menu?” n