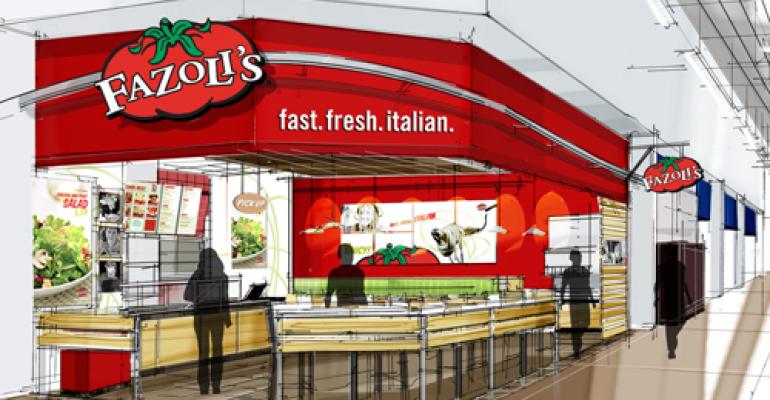 Fazoli's plans to open a 50-seat location in a St. Louis Walmart Supercenter in January, the first in its plans to expand aggressively through on-site restaurants, the company said Monday.

In addition to its partnership with the world’s largest retailer, the 220-unit Fazoli's also is exploring opening restaurants in shopping centers, airports and college campuses, said chief executive Carl Howard

“This is the first of many more to come,” Howard said. “We are aggressively taking a nontraditional growth strategy, and we have an executive dedicated to just nontraditional growth. We’re working with the major airport and college players now and are attending all those conferences. We believe we can be a premium player in that space.”

The corporate-owned unit in the St. Louis Walmart will sport the full Fazoli’s menu and upgraded service elements like table service by food runners that figure prominently in the chain’s remodeled locations. Unlike the refurbished restaurants, which have upgraded to real plateware and silverware, the on-site unit will keep using disposable materials for convenience, the company said.

“A lot of it’s going to be learning on the job, because it’s our first nontraditional location,” Howard said. “We’ve forecasted a bit of a lower check average, because we think portable things like slices of pizza and sodas will be very popular. But we’re going to also have family meals available, which is a great opportunity for families to complete their Walmart experience.”

He added that Fazoli’s expects a lower volume than the chain’s average unit total, owing in part to the absence of a drive-thru, but he said projections based on the volume of shoppers at that Walmart should provide a satisfactory return on the investment.

Fazoli’s said its nine restaurants in the St. Louis market have been remodeled to accommodate the brand’s new look and upgraded service, bringing about 10 percent of the whole system up to the new model. Howard expects about 30 percent of the chain to be refurbished by April of next year.

Howard said Fazoli's has had positive same-store sales at both corporate and franchised locations for 85 of the past 86 days. In terms of sales and guest counts, Fazoli’s most recent quarter was its best since 2002, he said, and September 2010 was the chain’s best since December 2002.

“We’re also having a great October,” he said. “We’re posting numbers close to what you’re seeing out of McDonald’s, up 5.9 percent the last couple months. We certainly think we’re hot again and that this brand has a lot of potential.”