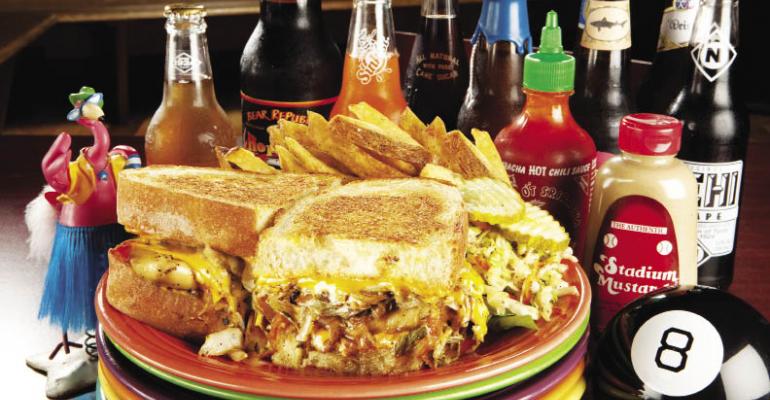 Consumers’ demand for top-notch food and convenience are dovetailing in an emerging restaurant segment.

“Fast fine” restaurants often have check averages in the mid-teens or higher and offer fast-casual-style service and extensive counter seating with takeout. But a distinguishing characteristic of this new style of restaurant is that customers can control their experience and spend as little or as much as they want.

At Cascabel, a taqueria on New York City’s Upper East Side, customers can order two tacos made from all-natural beef, pork or chicken for $7.50 and a $3 bottomless soda and get out of there for $10.50 — orders are placed at the counter and the food is brought to the tables, so tipping is optional — or they can start with a $7.50 pomelo salad appetizer, get a $6 side of quinoa and beans with their tacos and a $22 shot of super-añejo tequila and spend $43. A $26 bottle of sparkling cava and a $45 Australian Shiraz are on the menu, too.

Similarly, at Bark Hot Dogs in Brooklyn, N.Y., customers have the option to get a $4.25 hot dog and a $3 mass-market beer, or they can splurge on an $8 Weisswurst and a $3 side of fries and wash it down with a $5 draft microbrew — or a $16 glass of sparkling wine from New Mexico.

“It’s about doing fast food and doing it right,” said Brandon Gillis, Bark’s co-owner. For Gillis, that means custom-made, private-label hot dogs and sausages, house-made condiments — except for mainstream ketchup, mustard and mayonnaise, which he says shouldn’t be messed with — local products, renewable wind and hydroelectric power, and a heavy stress on recycling.

Gillis said they were aware that a $4.25 hot dog in a city where they were generally available for less than $2 was “polarizing,” so they worked to manage the lows of the concept — $3 beer and easily recognizable, mainstream condiments — as well as with highs, such as $9 glasses of wine.

The result has been rave reviews and a $14.25 average check.

While Gillis wanted to sell quality fast food when he stumbled into the fast-fine segment, Matt Fish had in mind a bar that just happened to have good food when he opened 100-seat Melt Bar and Grilled in the Cleveland suburb of Lakewood, Ohio, in 2006.

“But it became a restaurant with a really good beer list,” said Fish, who offers 20 beers on tap.

The restaurant’s hook is grilled-cheese sandwiches, ranging from the $5.50 basic Kindergarten to the $10 Parmageddon with potato and cheese pierogi and sharp cheddar to the $13 Lake Erie Monster, featuring beer-battered walleye, American cheese and jalapeño tartar sauce. The average check is $12 to $15, and 35 percent of the business is takeout, Fish said.

Last month he opened his second Melt, which has 160 seats, in nearby Cleveland Heights.

Both the term “fast fine” and possibly the idea of it came from chef and restaurateur Tom Colicchio, who opened his first ’wichcraft sandwich restaurant in 2003.

He coined the term in 2007 at the Aspen Food & Wine Classic, during a panel discussion on the future of fine dining.

“The ‘fine’ part that Tom was getting at was that we were never going to turn our backs on the principles of the quality of ingredients, the type of service we could give over the counter and the type of food we were doing,” said Jeffrey Zurofsky, Colicchio’s business partner in the chain, which now has 14 units — 12 in New York City, one in Las Vegas and one in San Francisco.

’Wichcraft is a collaboration of Zurofsky, Colicchio and chef Sisha Ortuzar, who had worked with Colicchio on special projects such as Craftsteak and Craftbar.

“Tom asked Sisha what he wanted to do next, and he said, ‘Sandwiches,’” said Zurofsky, who at the time was shopping around an idea for sandwiches based on farmers market produce.

He broached the idea with Colicchio, who suggested they work together.

Although Zurofsky recalls customers grousing at the prices when the first ’Wichcraft opened — sandwich prices average $8.50, and the in-store per-person lunch check average is $12 — it’s now one of the lower-end restaurants in the segment.

Sandwich choices include pole-caught tuna with fennel, black olives, aïoli and lemon, served on a baguette for $8.50; marinated white anchovies with a soft-cooked egg, roasted onion, salsa verde and frisée on country bread for $8.95; and meatloaf with cheddar, bacon and tomato relish on a ciabatta roll for $9.50.

“If you’re going to put a pound of meat on a sandwich, it’s going to be expensive, and a good strong condiment adds as much flavor,” he said.

Zurofsky also aims to save on normal fine-dining expenses such as linens, printing a daily menu and using gas burners all day. He also expects to leverage the company’s size, and the fact that it pays its suppliers in 15 days to negotiate good prices.

Even so, the chain’s food cost is in fine-dining territory at just under 30 percent. So the chain makes use of its real estate by offering breakfast, lunch and dinner as well as afternoon snacks that include a coffee “happy hour” from 3 p.m. to 6 p.m. when all coffee drinks are 50 percent off. A couple of the units also have liquor licenses and full bar service. Others offer table service at dinner.

Fast fine came to Perbacco, a high-end Italian restaurant in San Francisco, when management opened Barbacco next door to make its food available to a more varied, less affluent crowd.

“We basically wanted to create something that was a little bit more casual and approachable, providing the same quality of food as Perbacco,” said general manager Maria Armando.

Per-person checks generally range from $15 to $25, and nothing on the menu is more than $12, although those higher-end items are spread across the menu and include a $12 burrata and an $11 chef’s choice salumi selection available as appetizers, as well as a main-course chicken cacciatore.

About 25 seats in the 66-seat restaurant are at the counter, and a line in the kitchen is dedicated exclusively to takeout. Customers can even place their takeout orders online, Armando said.

Denver restaurateur Frank Bonanno said service is a key point of distinction for his fast-fine restaurant, Bones, which also contains a counter.

“The idea came from how many noodle places were popping up in New York and California,” Bonanno said, noting that most noodle shops in Denver specialized in Vietnamese pho and definitely not in service. “You’re expecting not to get water, not to have a manager to talk to, for the food to be OK. When you’re just going out to get some pho, your expectations are pretty low because you’re spending $7 for it. I thought I could produce something that’s a little bit more expensive, but make it a quality experience.”

Bones’ noodles start at $9, for ba mee with roasted squash, mustard greens and horseradish mascarpone cream, and go up to $17 for ramen in miso lobster broth with poached lobster and edamame. A poached egg from a local farm can be added to any noodle dish for $2.

Peking duck for two is available on Mondays, for $36 for half a duck or $60 for a whole one.

High-end sodas and house-squeezed lemonade are on the beverage menu for $3, but so are beer, saké, more than 40 wines and an array of $12 cocktails developed by beverage director, Adam Hodak. Bones’ average check is $24.

Bonanno says the biggest cost challenge for him is labor.

The restaurant’s still making money, he said, “but it’s not exactly 15 percent to the bottom line.”