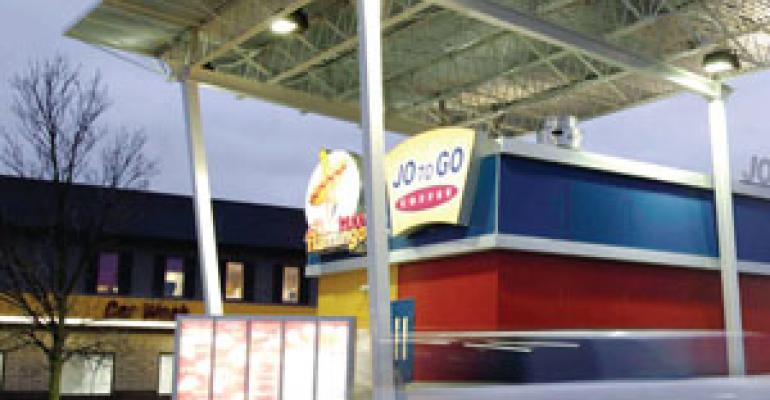 As McDonald’s gears up to sell espresso-based beverages systemwide, other specialty coffee operations that have drive-thrus smell both challenges and opportunities.

The coffeehouse segment is in flux, which is evident in the expansion slowdown Starbucks Corp. ordered to reverse its recently softening sales and traffic trends, and by recent management shakeups at 142-unit Tully’s Coffee of Seattle and 484-unit Caribou Coffee of Minneapolis.

Meanwhile, others are exploring ways to compete with giant chains that have upgraded the tastes of America’s coffee drinkers.

“Other chains are trying to compete on convenience,” said Darren Tristano of the Technomic Inc. consulting firm in Chicago. “While Starbucks seems to be experimenting with drive-thrus, the biggest issue is that McDonald’s will have a competitive product through the drive-thru.”

To date, 2,500 Starbucks Coffee units, or less than 17 percent of its system, have drive-thrus, according to a tally provided by a spokesman.

However, some smaller coffee chains have grown to depend on drive-thrus for the bulk of their business, though most deny that they worry about McDonald’s foray onto their turf. Yet some of those chains either are scaling back on drive-thrus or broadening their menus to compete with food-focused rivals.

Jo to Go recently changed its strategy from strictly drive-thru coffee to dual-branding with its new Mexican grill, Taco Flamingo, also a drive-thru-only concept. Dick DuBois, founder and president of Jo to Go, explained that having a drive-thru-only, coffee-only format limits an operator to the morning daypart. Unless you broaden your menu, “you just can’t compete,” he said.

“A multiconcept is better,” DuBois said. “You still get drive-thru coffee, plus an afternoon and evening daypart.”

Although some people initially think coffee doesn’t go with burritos, tacos and churros, DuBois pointed out that coffee beans come from Latin American countries. Jo to Go also sells its own lemonade and smoothies as well as soft drinks, teas and orange juice.

Dutch Bros., a drive-thru-only chain, expects to open between 30 and 40 more franchised single- and double-lane drive-thru units this year, said Dave Morris, its vice president of marketing. If those plans materialize, gross sales at year-end could total about $60 million, up from 2007’s systemwide total of $40 million, he said.

“We are very fast,” Morris said, noting that most drinks are ready by the time customers reach the transaction window, often in a minute or less.

It’s a Grind, on the other hand, plans no more drive-thru units, said Rick Kowalski, vice president of operations. Its drive-thrus primarily were built in the original Long Beach market units.

“We are a destination,” he said. “Malls work really well.”

Kowalski doesn’t consider It’s a Grind’s customers to be the same people who frequent McDonald’s and does not fear a sales erosion after the burger chain launches its espresso platform.

Mary Katherine Quasarano, a spokeswoman for Biggby’s, said she foresees “a whole new population of consumers coming into the specialty coffee market” who first experience upgraded offerings at McDonald’s.

Biggby’s will have drive-thrus in all four units currently under construction, Quasarano said.

“Society is demanding that type of [drive-thru] service,” she said, citing customer feedback. “They like the convenience. The build-out is more expensive, but it pays back very handily.”

Operationally, having separate equipment for the drive-thru and for inside orders keeps lines moving, she explained.

Rapidly growing Cuppy’s opened 17 cafes, 24 dual-drive-thrus, four kiosks and 13 mobile units in 2007. Less than two years old, the franchisor has set an ambitious goal of opening 1,500 stores across the country within five years and has begun international expansion in Canada, Puerto Rico and South Africa.

About half of the Cuppy’s stores are the dual-drive-thru model, said spokeswoman Andi Davidson. Currently, franchisees seem more interested in the cafe model, she noted, primarily due to location factors.

The dual-drive-thru is simpler to run, she said, but it requires a high-traffic site.