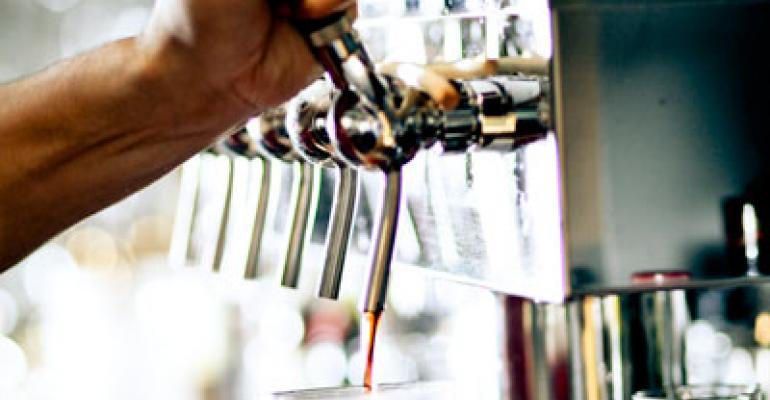 Customers thirsting for the flavor and flair of craft cocktails have an appealing new service option in some bars and restaurants — pre-batched signature drinks on draft that spare them the usual wait for muddling, shaking and stirring.

Although the craft cocktail on draft is a new phenomenon in the bar scene, bulk beverages, of course, are not. Beer and soda have flowed through faucets for ages. In the past several years, a growing number of wineries have packaged premium wine in kegs for easy tap service. Similarly, some watering holes dispense shots of Irish whiskey, bourbon and liqueurs from taps. Little wonder that the turnkey cocktail should dawn as well. Customers seem fascinated by the novelty, and perhaps the quick gratification, too, of a mixed drink served with just a flick of the bartender’s wrist.

The formula is equal parts Plymouth gin, Campari and house vermouth, the latter a blend of Punt e Mes and Cinzano, mixed in soft-drink kegs in house. It is served on the rocks from a draft system that also pours keg wine at the bar.

“The idea is neat and kind of geeky, but fun as well,” Diedrich said. Area restaurant employees were the first fans of the drink at Jasper’s, but it soon caught on with guests in general. In fact, the first keg sold out in a day and a half.

The fact that it takes just five seconds to serve a draft Negroni is a bonus for Jasper’s bartenders, who handle 300 orders on the busiest nights, not to mention impatient patrons.

“You don’t have to jigger it or stir it in a mixing glass,” Diedrich said. “It gets you out of the weeds pretty quickly.”

El Cobre, a Cuban restaurant in New York City, is also finding draft cocktails to be a hit. Its Dark and Stormy is made with Gosling’s rum, house-made ginger syrup and fresh lime. The Cuba Libre has a custom rum blend, house-made cola syrup and fresh lime. Beverage manager Mayur Subbarao batches the drinks in pony beer kegs and dispenses them with a CO2-propelled draft system that gives the drinks a light carbonation.

“Originally, my plan was to have a rotating selection of tap cocktails, but the Dark and Stormy has been such a hit that I haven’t actually changed anything yet,” Subbarao said.

Other good candidates for the tap, in his opinion, are drinks like the Americano and Pimm’s Cup. “I would do anything in the aperitivo family and the general highball family,” Subbarao said.

Even more ambitious is the planned scheme for Tavernita, a new Spanish- and Latin-inspired restaurant that Mercadito Hospitality plans to open in Chicago this fall. Beverage consultants Paul Tanguay and Tad Carducci, known as the Tippling Bros., are developing a 48-head custom draft system that will pump out as many as eight cocktails, plus beers, wines, cider, house-made vermouth and house-made sodas.

“We are trying to deliver that craft drink at lighting speed,” Tanguay said. “People want their cocktails. They don’t want to wait around.”

Tanguay said that he has been encouraged by the positive results of a test of kegged margaritas at Mercadito restaurants in Miami and Chicago. Customers at those locations actually preferred the taste of five-day-old margaritas tapped from kegs to fresh margaritas mixed a la minute. The reason is unclear, but it may because the flavors marry in the keg.

Still, one question remains: does the turnkey cocktail on draft diminish the craftsman image that bartenders have worked so hard to earn?

“There will be people in the world of mixology who will say this is wrong,” Tanguay said. “But for us, if you are using great ingredients and you can pour a drink that is delicious, why not?”

“We still love craft cocktails and we are still serious about them, but we want to stop being so serious all the time,” Diedrich said. “We want to get back to having fun behind the bar, while still making a great, balanced cocktail.”