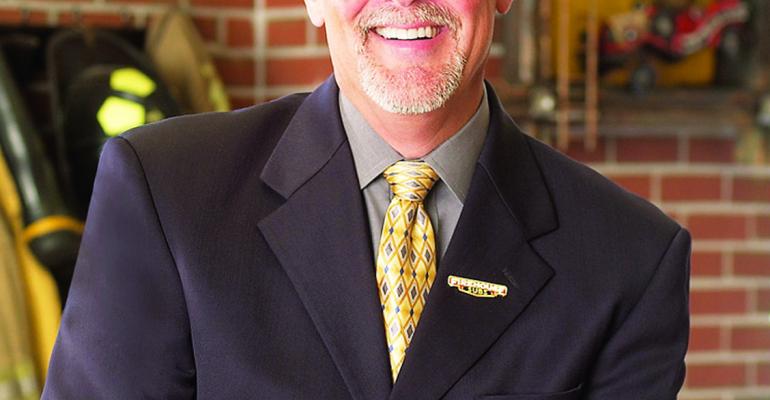 Don Fox of Firehouse Subs named Operator of the Year

This is part of NRN’s special coverage of the 2011 Multi-Unit Foodservice Operator conference, or MUFSO. The conference is taking place Sept. 25-27 at the Gaylord Texan in Grapevine, Texas. Follow all coverage on NRN’s ‘At the Show’ section, check out NRN blogs, Reporter’s Notebook, and Tweet with us using #MUFSO.

Among four Golden Chain award winners, Don Fox, chief executive of Firehouse Subs, was named the 2011 Operator of the Year during an award celebration Monday night at MUFSO.

The distinction, voted on by readers of Nation’s Restaurant News, places Fox on a long and prestigious list of fellow Operators of the Year, from last year’s Sally Smith of Buffalo Wild Wings, to the inaugural award winner, Warren Rosenthal of Jerrico’s, who won in 1971.

"It really takes a team, I know its a cliche," Fox said as he won the award. "But I am blessed ... I'd put my franchisees up against any franchisees in any system ... I am just blessed to have an apportunity to lead them and try to inspire."

The Golden Chain awards are given to restaurant executives leading their brands to new successes. This year, the group included J. Patrick Doyle of Domino’s Pizza, Steele Platt of Yardhouse Restaurants, Steve Romaniello of Focus Brands and Fox of Firehouse. From that group, readers of Nation’s Restaurant News vote for one Operator of the Year, who is announced at the final night of MUFSO.

Fox has been chief executive at Firehouse Subs since 2009, overseeing a company on a rapid growth trajectory. Since he joined the Jacksonville, Fla.-based company in 2003 as director of franchise compliance, Fox has helped the firefighter-themed sandwich chain grow from 65 restaurants to 442 locations. Firehouse ranked eighth in unit growth in Nation’s Restaurant News’ 2011 Second 100 report, and systemwide sales are projected to hit $290 million this year. The chain’s same-store sales have increased 5.6 percent through this year.

“He came in at a time when we needed to bring everyone to the table to make this a better brand and a bigger brand,” said Robin Sorensen, a former firefighter who founded the chain in 1994 with his brother, Chris. “He’s great at long-term vision and great at getting people engaged and getting all the key players involved … It became obvious early on that he was going to be a great asset for us.”

"Thank you to the Sorensens," Fox said, "to all the customers, team members and peers in the industry who voted for me."