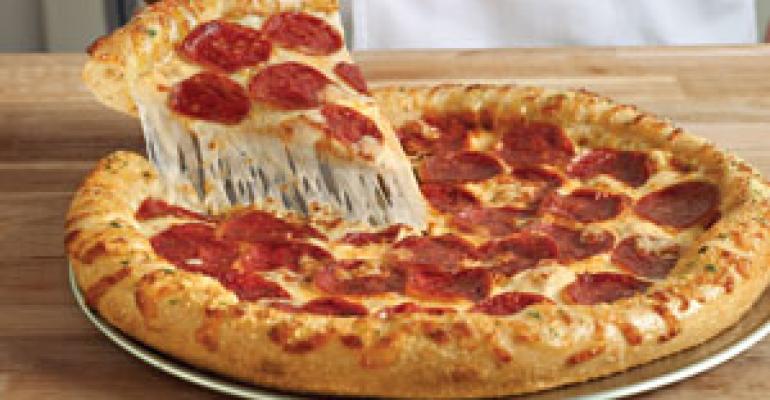 The sales surge helped Domino’s Pizza Inc. post a 3.2-percent gain in first-quarter net income, to $24.5 million from $23.8 million in the same quarter a year earlier, the company said Tuesday.

Earnings per share remained flat at 41 cents. Backing out one-time items in both quarters, including debt retirement, per-share earnings totaled 35 cents in the latest quarter, up from 20 cents in the same year-ago quarter.

When asked how much the new pizza — which was reformulated with what Domino’s called a more robust sauce, a new cheese blend and a crust with a stronger garlic accent — accounted for the same-store sales jump, Doyle replied, “All of it.”

“We felt it from the day we went on the air with the new advertising,” Doyle said. “It was a terrific quarter, and it was driven by basics: fantastic food and quality service. Our franchisees did a great job of handling all this increased volume.”

At least one securities analyst said the U.S. same-store sales increase was the highest on record for Domino’s. Same-store sales also rose 4.2 percent for the company’s international division, which has more than 4,125 restaurants in more than 60 foreign countries, but has yet to . Ann Arbor-based Domino’s operates or franchises a total of 9,036 restaurants worldwide.

The company’s international division recorded its 65th consecutive quarter of same-store sales growth, even without the benefit of the chain’s successful new pizza recipe. Doyle said the reformulated pizza is being tested in a few markets internationally.

He added that the overarching goal following the success of the first quarter would be operational execution.

“It’s about giving people what they’re coming to expect from Domino’s,” he said. “We’re hunting down those last few holdouts, but we know based on the reaction from consumers and the increase in frequency and repeat visits, that when we get people to try this new pizza, we win.”