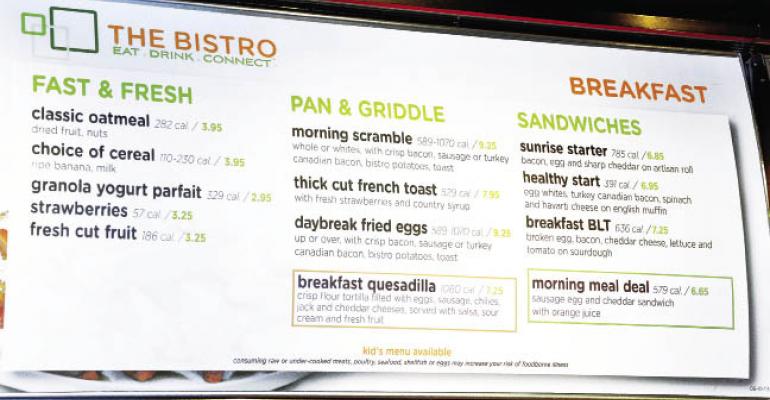 Diners looking for information, indulgences in 2011

Balancing consumers’ cravings for indulgent foods with their increasing desire to know what their meals contain will pose a challenge for operators in 2011, according to market research firm Mintel.

The company identified key issues the industry likely will face next year and highlighted the increased demand for information on ingredients’ sources and nutritional content. The interest in transparency comes on the heels of federal regulations that will require many chains to post nutritional information on menus.

Yet even as diners welcome more information about the composition of their food, they are not willing to sacrifice taste.

“Both the government and consumers want healthier menu options, but restaurant-goers are also very concerned about value and how their food tastes,” said Eric Giandelone, director of foodservice research for Mintel. “Keeping both parties satisfied might be a challenge.”

Here are Mintel’s five trends to watch for in 2011.

Consumers say they feel good about themselves after visiting restaurants that offer healthful dishes — even if they don’t order them. While 62 percent of consumers claim they plan to eat better, many still feel that nutritious dishes simply don’t taste good, Mintel said. Restaurants offering a mix of nutritious and indulgent items can benefit from this perception of health while still satisfying less healthful cravings.

The use of automated menus, mobile apps and other unmanned ordering options is expected to grow as operators try to reach young, tech-savvy consumers and diners who want to customize their orders, Mintel said. These systems, the company noted, also could have the benefit of reducing labor costs by allowing operators to cut front-of-the-house staff.

This year’s health care reform included a provision that restaurants with at least 20 locations must post nutritional information on menus, and a majority of customers welcome the practice. In fact, 61 percent of consumers say restaurants should post nutritional data on menus. In a similar move toward transparency, Mintel predicts that more cities will require restaurants to post health inspection scores, as some larger restaurant markets, including New York and Los Angeles, have already done.

Customers want to know where their food comes from. Use of the term “local” on menus increased 15 percent from the second quarter of 2009 to the second quarter of 2010, and the number is expected to continue to grow. The next step for restaurants is ingredients that are perceived as traditional or authentic, particularly ones used in ethnic dishes.

Even as customers claim they want to make healthier choices — 43 percent say they’re likely to change their orders when faced with high calorie counts on menus — they still want to treat themselves. Limited-time offers, which will be exempt from menu-labeling regulations, present an opportunity for restaurants to minimize guilt for customers who want to satisfy their cravings. n