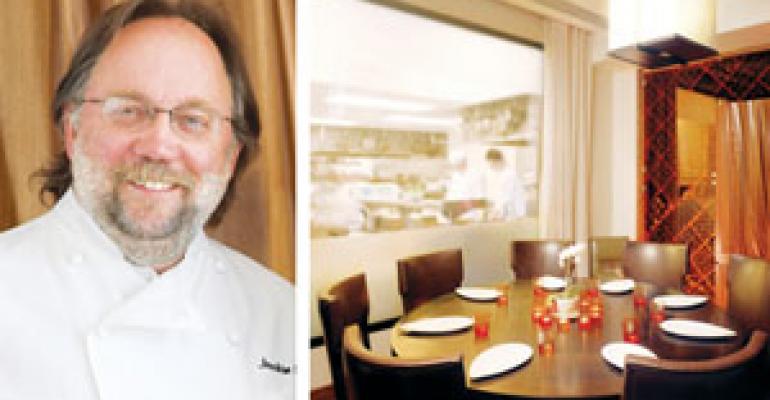 On the Cutting Edge: Joachim Splichal

Joachim Splichal now shares oversight of some 60 restaurants and foodservice operations in performing arts centers under the umbrella of Patina Restaurant Group. A long-time celebrity chef on the Los Angeles dining scene, Splichal and partner Nick Valenti, founder of the former New York-based Restaurant Associates, formed their bi-coastal boutique culinary company in 1999, which includes a major catering division. Restaurants include the flagship Patina in Hollywood, Nick & Stef’s Steakhouse, three restaurants in Downtown Disney District at the Disneyland Resort and casual Market Cafes in a number of museums.

When you started your career, did you ever dream you would be where you are today?

No. Every chef has the same dream—to have your own restaurant or be in a prestigious hotel. When I first started I wanted to have one restaurant.

How much of your time do you spend today focusing on food and how has your role changed from your early years?

I would say at least 60 percent. When I first opened Patina, I was at the stove every day before I could afford a chef de cuisine or executive chef. Now my role is totally different. It still has a lot to do with culinary, but it evolves from year to year. It has to do with menus, training, tastings, etc.

How do you and the other top Patina executives share the decision making?

We have an executive committee of four people—myself, Nick Valenti, chief executive officer; Fred Wolfe, president; and Tim O’Shea, chief operations officer. We meet and then we go forward.

What aspects of your earlier career helped you with your role today?

I got a lot of very solid training—traditional European training in Switzerland, Sweden, Israel, Holland—and I ended up in France. The most exciting food came when I went to France, which gave me the finesse I was missing. I learned everything from banquets to breakfast and went through all the different stations. That helped me a great deal.

What sets your company apart from competitors?

Quality and diversity. We have everything from Patina, which is always rated one of the top restaurants in Los Angeles, to museums and sports venues.

What are some of the top events you’ve catered?

We’ve done the Emmy Awards for 11 years with 3,500 for a sit-down dinner, the Democratic convention when it was in Los Angeles for 15,000 people, a lot of large film openings. In New York, we do a lot of big events at Rockefeller Center. We do between 10 and 20 large events of over 1,000 people every year just on the West Coast.

“I worked for him for five years. He was always a brilliant chef. He has a tremendous talent for both business and cooking that have led to his success. He learned by doing, and he had the right partnerships, too. He was always ambitious, and he’s brilliant, so anything is possible.”—Traci Des Jardins, co-owner of Jardiniére and Mijita Cocina Mexicana and managing chef of Acme Chophouse, San Francisco

Do you consider Wolfgang Puck to be a competitor?

I definitely consider Wolfgang a competitor for catering and in the same city, but we are friendly competitors. From a restaurant standpoint, we are very different.

Do you fear losing the uniqueness of your brand as you become a bigger company?

No, because the principles are still the same. The chefs and general managers run the restaurants. We don’t control them 100 percent from a corporate standpoint. The general manager and the chef make the difference because they give the hospitality to the client.

Is being a mentor important to you?

Yes. I’ve mentored at least 30 to 35 chefs in town who have worked with me and gone on to have their own successful restaurants. A few of them are Octavio Becerra of Palate in Glendale, Calif.; Josiah Citrin of Melisse in Santa Monica and Traci Des Jardins, co-owner or managing chef of Jardiniére, Acme Chophouse and Mijia in San Francisco. I think mentorship is the most important thing—to give them the right tools for the future.

Meeting customers that had an incredible experience in one of our restaurants. It’s a good feeling when you talk to those people and they tell you they want to come back. You know you are doing the right thing.

What is the most challenging aspect of your job?

Do you expect your company to keep growing?

In this business, there is so much more to do. There are many opportunities to take advantage of.

What would you like do in the distant future?

I always wanted to own a small winery and make wine.