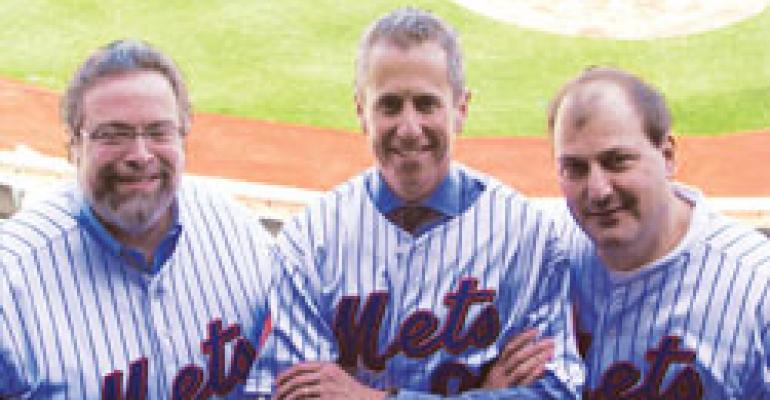 'Culinary All Stars' ready to play at Citi Field

NEW YORK The New York Mets and Aramark will be playing ball with three of this city’s culinary powerhouses at Citi Field, the Mets’ new stadium, when the Major League Baseball season starts in a few weeks.

Click here for a sneak peak of Citi Field and its culinary offerings.

Danny Meyer, Drew Nieporent and Dave Pasternack, all veterans of Manhattan’s dining scene, will operate restaurants at various price points and locations throughout the new stadium.

“With Drew and Dave joining Danny at Citi Field, we feel poised to deliver on our goal of creating a new dining and entertainment destination attraction in New York City,” said Jeff Wilpon, the Mets’ chief operating officer.

All three restaurateurs were presented Tuesday with personalized Mets jerseys and team officials described them as a team of “Culinary All Stars” ready to bring new flavors to the ballpark experience.

“From the outset, our goal was to work with the Mets to create a dining experience at Citi Field that showcases the distinct tastes and flavors of New York,” said Marc Bruno, president of sports, entertainment and conventions for Philadelphia-based Aramark.

Meyer’s Union Square Hospitality Group will operate its familiar Shake Shack and Blue Smoke concepts, as well as new offerings, El Verano Taqueria and Box Frites, behind the stadium’s centerfield scoreboard, as well as the Delta Sky360 Club on the field level. The upscale club, on the field level behind home plate, will be accessible for 1,600 ticket holders, once it opens. Workers were still painting and hammering in the space as of Tuesday.

Pasternack, chef at Esca in Manhattan and the 2004 James Beard Award winner as best chef, will operate his Catch of the Day quick-service concept in the same centerfield area as Meyer’s restaurants.

“Having grown up a Mets fan, and now, with the opening of Citi Field, this was a tremendous personal opportunity to improve on the dining options we offer ballpark guests,” Pasternack said.

Nieporent’s Myriad Restaurant Group, known for Manhattan’s Nobu and Tribeca Grill, will operate the Acela Club, an upscale, 350-seat restaurant with a multi-tiered dining room and outdoor patio seating, overlooking left field. The 8,000-square-foot Acela Club will be open to special ticket holders, including Delta SkyClub Platinum and Gold, Ebbets Gold, Caesars Club Platinum and Gold, Metropolitan and Field Box, and Commissioners Box. That restaurant is ready to go, with the Mets playing exhibition games against the Boston Red Sox on April 4-5.

“The real reason I am here is because my brother Tracy and I are devout Mets fans, since 1962,” Nieporent said. “We are lifelong New Yorkers. When the Mets approached us about participating with them to create great food at Citi Field, we were inspired by their commitment to making it happen.”

“I am shaking right now, I am so thrilled,” said Meyer, who has been a Mets season ticket holder since 1986. Meyer, a St. Louis native, did admit that he got those season tickets so he could easily see his beloved St. Louis Cardinals when they came to town. “I love to root for the Mets, except when they are playing the Cardinals.”

Pasternack and Meyer showed off some feisty competitiveness when addressing their ballpark French fry offerings. Pasternack said his Bayside Fries, sprinkled with smoked sea salt and Old Bay seasoning, were poised to become “legendary” once guests got a taste.

“I can’t wait for people to try them,” he said.

Meyer then plugged his Belgian-style frite concept and issued a playful challenge to his neighboring chef.

“You come out to Box Frites and we will give you a run for your money,” he said.