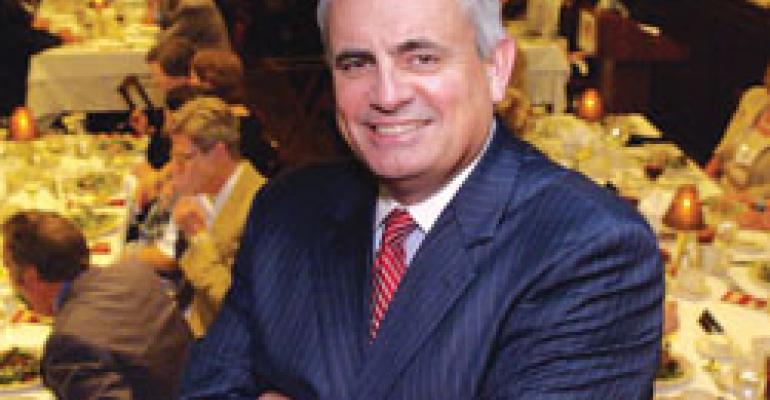 Craig S. Miller, chairman, president and chief executive of Ruth’s Chris Steak House Inc. and a former chairman of the National Restaurant Association, was once just a typical 13-year-old, in need of some pocket money and looking for an after-school job in central Florida, where his family had just moved.

A neighbor owned a restaurant and hired Miller as a cleaner and dishwasher, he recalls.

One day, the “sandwich lady” failed to come in, and the rest, as they say, is history. He got into cooking and, quite simply, fell in love with the industry, quickly developing what he calls a lifelong “passion for building businesses.”

Miller looks back on those early days as good training that taught him a respect for people and an understanding of service.

Now, at age 57, with a career spanning more than 40 years, he calls his current post as chairman, president and chief executive of Ruth’s Chris “one of the best jobs in the American foodservice industry today.”

Retirement is hardly a consideration for Miller, who has taken founder Ruth Fertel’s motto, “Do what you love and love what you do,” to heart.

He says the “very infectious team spirit of wanting to serve that infuses our industry” keeps him going.

“I spend very little time at my desk,” says Miller, who over the next several weeks will fly to San Francisco, Toronto, Washington, D.C., London and Los Angeles. “My family understands that that’s the type of person I am, and my wife comes with me on occasion.”

In the three years since he signed on as Ruth’s Chris president and chief executive, Miller has brought in a new management team and grown the chain by 20 percent, opening 21 new units. He also led the company through an initial public offering.

This year, new “luxury lounges” and increased private dining and function space have enabled the company to weather a difficult macroeconomic climate. In the second quarter ended July 1, revenues from those areas helped to offset slower traffic from à la carte diners, company officials say. The chain also has more aggressively targeted baby boomers, a market now viewed as “graduating” to the high end after years of frequenting casual-dining operations.

Shortly after joining Ruth’s Chris, Miller faced what some analysts view as a defining moment, the unique challenge of stabilizing the chain after Hurricane Katrina and relocating corporate headquarters from its New Orleans birthplace to Heathrow, Fla.

“Two years ago, things were out of our control,” he says. “Now, we are in a major growth mode and dominant in our segment.”

A year ago, he was elected chairman of the board in addition to his roles as president and chief executive, in recognition of his achievements.

No one is be less surprised by those accomplishments than Aaron Spencer, founder, director and chairman emeritus of Boston-based Uno Chicago Grill, where Miller served as president and chief executive for 17 years.

“We never had an argument in all those years,” he says, “and although he is young enough to be my son, he really had the father role in our relationship. He says I was his mentor, but he mentored me. I had no corporate background. Craig brought professionalism to Uno and was instrumental in our going public and then going private.”

John Glass, restaurant analyst with the Canadian Imperial Bank of Commerce, says Miller “understands the details” and has “seen the range of consumer behavior” across the broad spectrum of the industry from high end to low end.

The high-end steakhouse segment, Glass adds, is facing a challenging environment but remains an attractive segment. Miller, he observes, “is one of the brighter pace-setters.”

“There’s a lot to like” about Ruth’s Chris under Miller’s guidance, says Dennis Lombardi of WD Partners in Columbus, Ohio.

“Craig has tightened the economics, increased operating results, and brought up the check average, the average unit volume and EBITDA margins,” Lombardi says. “He’s a very solid operator’s CEO and knows how to get people in the right spots.”

Under Miller’s direction, Lombardi adds, Ruth’s Chris is now focused on growth and rising to new levels. While sales may be relatively flat this year, “if you’re flat, you’re doing well,” he says.

Miller credits the diversity of the Ruth’s Chris’ customer base with the chain’s success, calling it “heavily special occasion, about 50 percent women, families and business diners.”

Consumers today, he says, are “more attracted to quality than they were a decade ago.”

To that end, an extensive 13-week wine certification program for employees has helped increase wine sales to more than $1 million per unit.

“We make sure our people know the products and how they match with menu items,” Miller says. “We give them professional sommelier training that helps them in their careers.”

Keeping relevant is of the utmost importance to Miller, who understands well the macroeconomic pressures his customers are facing.

Several initiatives are under way to bring customers into the restaurant at nonpeak times, such as a test of lower prices in the early evening starting at 5 p.m., and a Friday Power Lunch. The latter will soon be expanded from eight to 12 markets and it “creates an opportunity to use our restaurant for another daypart,” he says. Served from 11:30 a.m. to 2 p.m., the meal is generating an average check of $50 and a number of the units are exceeding the target of 100 entrées.

Miller says the Friday lunch enables guests to relax and enjoy a meal period that he sees as having become “quick-service-oriented.”

Looking down the road, continued international growth will come through franchisees, says Miller, who views franchising as “the best way to develop those markets.” This year, the chain will open eight new units by year-end, among them, a first restaurant in Japan and a fourth in Canada.

“I see the potential for a $1 billion to $1.3 billion brand for Ruth’s Chris,” he says. “We’re now north of $500 million. We believe we can dominate our segment. I see multiple new restaurants coming.”

Miller also sees the potential for 200 to 250 units domestically, many of them located in the 50 most populous U.S. cities, with 25 to 50 units in smaller locales.

Major urban markets can do particularly strong volumes, he says, noting that the Ruth’s Chris in Boston’s Old City Hall, for example, does around $10 million. A suburban unit is scheduled to open south of the city in Dedham, Mass., in a lifestyle center later this year or in early 2008.

“Urban restaurants can generate higher volumes because there are more business travelers,” Miller says, “but suburban ones are more stable and less event-driven. But both generate similar returns.”

As he looks back on decades of learning the ins and outs of managing restaurants, he says he sees the early years at Red Lobster as having laid “the foundation for how you manage, build a team, develop a culture and grow a business.”

“I’ve been able to use what I’ve learned, and really enjoy doing it,” he says. “At Ruth’s Chris, I’ve built a new leadership team. We have a strong, embedded culture, and we nurture and protect it. When you’re growing an organization, it’s important to recognize the investment you have to make in your people, and then you maintain excellence in the execution of your brand.”