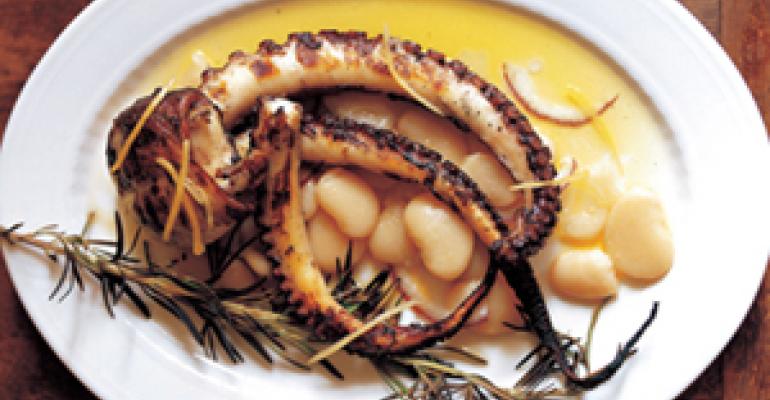 Sometimes, with certain ingredients, less is more. When it comes to corona beans, however, chefs find that more is more. That’s because coronas are the giants of the broad-bean world, and their over-the-top appeal has boosted their popularity on menus. Like a northern bean on steroids, corona beans are big enough to cover the palm of a child’s hand. One bean is a mouthful.

Still, the ivory-colored beans have an elegant lightness that belies their size.

Chefs at Italian restaurants are particularly fond of coronas. At the coastal Italian fine-dining restaurant Esca in New York, for example, chef and partner David Pasternack has offered grilled octopus with corona beans since opening seven years ago. The dish has been too popular to take off the menu.

Pasternack braises and then grills the octopus and serves it with a corona bean salad that includes frisée and red onion, vinaigrette, rosemary and a touch of preserved lemon. As an appetizer during dinner, the dish is $14, but it also is served as an entrée salad at lunch for $20.

The beans are appealing in part because of the “wow factor” that comes with their size, but also because “they’re meaty,” Pasternack says.

“They’ve been called the steak of the bean world,” he says.

The key to serving corona beans is cooking them correctly, he adds.

Rather than cook the beans over the stove, as is typical, Pasternack covers the beans with water, adding carrots, onions, bay leaf, rosemary and garlic—but no salt, which is added only at the end. The chef then covers the beans and bakes them in a slow oven for about 90 minutes, depending on the age of the bean.

The dish is included in Pasternack’s new book, “The Young Man and the Sea,” scheduled to be published this June. Pasternack also opened a new restaurant called Customshop in Charlotte, N.C., a venture that is independent of his partnership with Mario Batali and Joseph Bastianich at Esca.

Massimo Fabbri, executive chef and partner of Tosca in Washington, D.C., uses corona beans frequently on his seasonal menu. The dried beans are available year round, but the way he uses them varies by season.

In winter, the beans were added to tripe soup, for example, because they do well in long-simmering dishes. Fabbri says he typically sautés a vegetable base, then adds the tripe and beans along with chicken stock and tomato, which simmers for three hours or so. The beans break apart somewhat, which adds a creamy texture to the soup. The dish was $12.

This spring Fabbri plans to use the beans in a salad—though he hasn’t quite decided how yet. He says he will cook the beans al dente for the salad, so they retain their shape.

“The flavor is similar to a great northern bean or cannellini,” Fabbri says. “What makes them unique is their size. But I think the flavor is also a little lighter. That makes them more versatile, so it’s easy to pair the beans with other ingredients.”

Staffan Terje, chef-owner of Perbacco Ristorante and Bar in San Francisco, agrees. His ever-changing menu has included grilled calamari with a corona bean salad, for example. Earlier this month, however, he paired the massive beans in a Tuscan kale stew with roasted suckling pig—a twist on the classic combination of pork and beans.

After an overnight soak, Terje simmers his corona beans in water with onion, celery and bay leaf—along with a bit of olive oil “to give it richness,” he says. After about an hour to 75 minutes, he seasons the beans with salt.

“It’s simple,” he says, “but that gives you more ways to utilize them.”

His suckling pig is deboned, and some of the meat is ground with prosciutto and bread crumbs to make a filling. The pork is then rolled with filling, tied and roasted. When ready to plate, Terje sautés the kale with garlic and olive oil and tosses in some beans, which break up slightly and offer starch to the sauce, giving it some substance. The pork is then sliced to reveal the filling and placed on a bed of kale and beans. The dish is $22.

Terje uses dried coronas imported from Italy, but in late summer he sometimes finds fresh beans grown locally, which are billed as Italian butter beans. Fresh beans have a pale green color, as opposed to the creamy white of the dried beans.

“Fresh beans cook a lot faster, and maybe they have a little brighter flavor,” he says.

In Portland, Ore., Dustin Clark, executive chef at Wildwood Restaurant and Bar, uses corona beans on the bar menu in an unusual way: He deep-fat fries the cooked beans in vegetable oil. No batter or coating is necessary. The frying process causes the skin to “flake,” which creates a “tempuralike crust,” he says.

The outside is crisp and the inside is creamy like a refried bean. The beans are served with a sauce made with hazelnuts, almonds, caramelized tomato paste, bread and a hint of cabernet vinegar. About 20 beans to a serving is priced at $5.

“We started offering these about a year and a half ago,” Clark says. “They’re pretty popular with the regulars.”