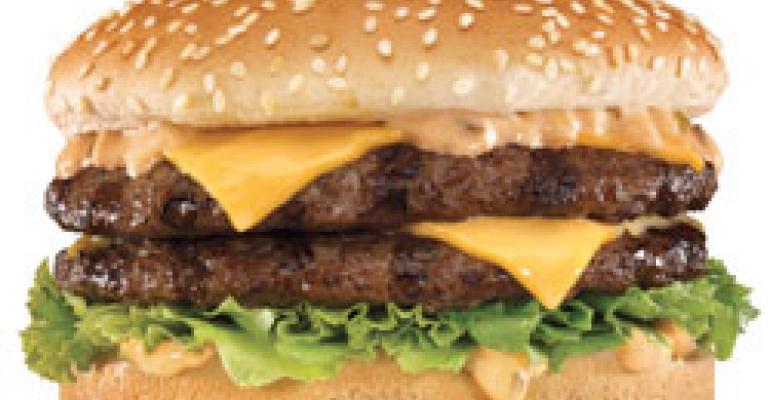 CARPINTERIA Calif. Urging consumers not to fall for the “McHype” about McDonald’s new Angus Third Pounder burgers, CKE Restaurants, parent to Carl’s Jr. and Hardee’s, said Tuesday the premium burgers served at its chains are better — and the company is planning to back that claim with a money-back guarantee.

In addition, CKE also threw a stone at McDonald’s iconic Big Mac with the introduction of a new Big Carl burger at Carl’s Jr. locations, scheduled for Wednesday.

CKE said the Big Carl will have twice the meat and cheese of a Big Mac, but will be priced at $2.49 or less in most restaurants. Big Macs are typically priced at $3 or more.

McDonald’s officials, however, declined to take the bait.

“In my opinion, we’re extremely flattered that people are paying so much attention to what McDonald’s is doing,” said Danya Proud, spokeswoman for McDonald’s U.S.A., based in Oak Brook, Ill. “We will continue to focus on our business and our customers, and the strategy that continues to give us success.”

The premium burger skirmish comes at a time when CKE also on Tuesday reported preliminary results for the second quarter ended Aug. 10, including same-store sales declines of 6.1 percent for Carl’s Jr. and 2.7 percent for Hardee’s.

However, CKE also said same-store sales trends appeared to improve somewhat in the four-week period ended Aug. 10. Blended same-stores sales were down 3.6 percent, an improvement from a 5-percent drop in the prior month.

McDonald’s, on the other hand, reported a 2.6-percent increase in same-store sales among U.S. stores in July. The global chain rolled out its premium Angus burger nationwide July 2 after testing the burger in several markets for two years. The rollout to the company’s more than 14,000 U.S. locations marked the first new burger introduction since 2001.

CKE officials called the timing of the roll out “ironic,” given that The Original Six Dollar Burger debuted in 2001 at Carl’s Jr. The Six Dollar Burger, with its half-pound patty, was so named because it is designed to be comparable in quality to a sit-down restaurant burger costing $6 or more. Hardee’s followed with the introduction in 2003 of a similar Thickburger line, featuring a one-third pound patty.

Over the past eight years, Carl’s Jr. has expanded the line to include eight Six Dollar burger options, with some options priced over $5 at some locations. The original, however, remains priced around $3.99 — about the same as McDonald’s Third Pounder.

“We’re glad being copied is considered the highest form of flattery, since we have been seeing a lot of it lately,” said Puzder. “Fortunately for our guests, our burgers are still better tasting and lower priced than the other guys’.”

“The Original Six Dollar Burger at Carl’s Jr. has 24 percent more meat than McDonald’s Third Pounders, yet costs the same — $3.99,” said Puzder. “And at Hardee’s the 100 percent Black Angus beef Original Thickburger has just as much meat as McDonald’s Angus burger, but costs 60 cents less. Those are the facts and that’s the value of our burgers.”

An ad campaign will support the promotion, as will advertising for the new Big Carl to debut Wednesday.