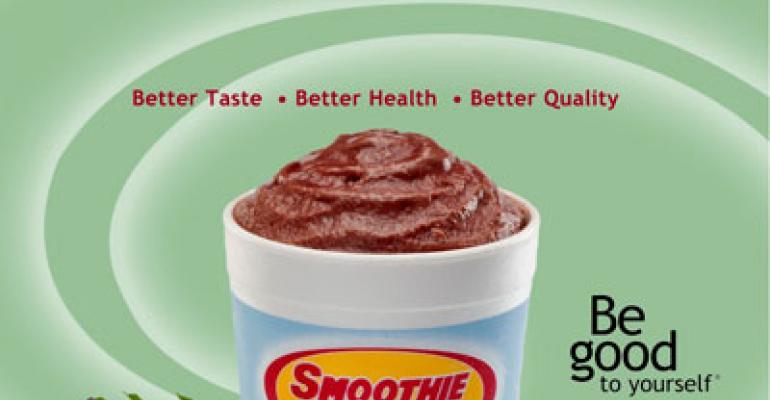 Chains get ready for summer with cool drinks

Smoothies, shakes and slushes on the menu as temperatures rise

As the mercury begins to climb, a growing number of restaurant chains are rolling out new smoothies, slushes and other chilled beverages.

Brands like Smoothie King, Jamba Juice and McDonald’s have introduced or are planning to introduce beverages developed for warm-weather traffic that also promote health benefits, while Starbucks, Dunkin’ Donuts and Arby’s will offer more indulgent treats.

The 600-unit Smoothie King chain said it has introduced its first organic beverage, the Organic Apple Acai Smoothie, as part of its “Be Good to Yourself” campaign.

The new smoothie, priced at a suggested $4.29 for a 20-ounce size, features organic apple juice and herbal nutrients as well as acai, a berry native to Latin American that has gotten attention for its antioxidants and amino acids. The small drink contains 360 calories, the New Orleans-based Smoothie King said.

“More and more people are looking for organic options — for themselves and their families,” said Cindy Kuhnau, co-founder and executive vice president of Smoothie King. “The Organic Apple Acai Smoothie is the first in what we hope to be an extended organic product line.”

Jamba Juice also has added to its wellness-focused options with a new Fruit & Veggie Smoothies line that rolled out this spring.

The three new smoothies are: Berry UpBEET, which combines strawberries and blueberries with the juices of carrots, beets, broccoli and lettuce; Apple ‘n Greens, a blend of apple-strawberry juice with the juices of dark leafy green vegetables, carrots and lettuce, along with spirulina, peaches, mangoes and bananas; and Orange Carrot Karma, which combines carrot juice, orange juice, mangos, bananas and ice.

None of Jamba Juice’s smoothies include high-fructose corn syrup, artificial flavors or preservatives, and all three contain fewer than 250 calories in the 16-ounce size, the chain said.

McDonald’s also will expand its smoothie offerings when it debuts a Mango-Pineapple Real Fruit Smoothie in July. The Oak Brook, Ill.-based quick-service chain also is rolling out Frozen Strawberry Lemonade to domestic stores.

Other chains are focusing more on indulgence with their new chilled drinks.

Canton, Mass.-based Dunkin’ Donuts is upping its ante in the chilled beverage marketplace with a new Mountain Dew Coolatta and the return of its Blue Raspberry Coolatta for the summer. The new flavors join the brand’s current Coolatta slush lineup that includes coffee, strawberry, vanilla bean and orange flavors.

Arby’s, a 3,600-unit Atlanta-based quick-service chain, is putting a new spin on a popular menu item with plans to offer a Jamocha Oreo Shake for a limited time this summer. The shake contains a swirl of Oreo cookie sauce and is topped with crumbled chocolate cookies.

Meanwhile, Seattle-based Starbucks said it is reintroducing its Mocha Coconut and Coconut Crème Frappuccino blended beverages as a limited time offering. It is made with Starbucks’ coffee, milk, bittersweet mocha sauce, coconut syrup and ice, and then topped with whipped cream, chocolate drizzle and toasted coconut flakes.

Ron Ruggless contributed to this report.