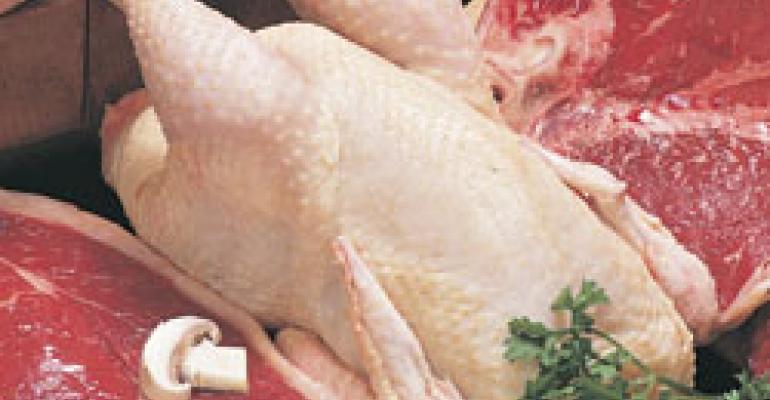 Rising commodity prices and shortened purchasing contracts for restaurant staples like chicken and beef are adding another layer of volatility to an already complex operating environment.

Having faced escalated costs and weak consumer spending throughout 2008, operators looking to 2009 are feeling mounting uncertainty about how high commodity prices will rise and whether it makes sense to lock prices into contracts or gamble on the spot market.

Restaurant companies such as Brinker International Inc., Chipotle Mexican Grill Inc., Denny’s Corp. and Famous Dave’s of America Inc. have said that as soon as food contracts begin to expire, some as early as next month, officials will be forced to negotiate new terms in a market altered by increased pricing, reduced contract times and fuel surcharges.

The year ahead “isn’t about how low you can buy but how realistically and how quickly [you can] make decisions,” said Denny’s Corp. vice president and treasurer Alex Lewis during a conference call with investors last month.

Varied sources estimate that prices for commodities such as grains, chicken and beef could rise anywhere from 4 percent to 16 percent in 2009. Chicken prices are especially volatile as feed prices increase and supply tightens. In response, two major chicken suppliers reportedly have shortened prospective contract times from the typical 12-month timeframe to 90 days, mainly to protect their own profits, said a restaurant securities analyst.

“The input costs have gone up quite dramatically,” said Richard Lobb, director of communications for the National Chicken Council. “The cost of corn is almost three times what it was two years ago. It’s a tough situation for everyone involved in the food chain.”

Denny’s officials decided it made sense for the operator or franchisor of the 1,545-unit family-dining chain to lock in its various food contracts earlier this year even at prices that were higher than a year ago. The company plans to do the same for next year.

“At the time, boy, it didn’t seem like a value,” Lewis said. “But in retrospect, we made some incredible buys.… I think that’s what we’re dealing with in 2009 as well.”

While many large chains lock in their food costs to help with menu pricing decisions and guide profit expectations, weekly spikes and drops in commodity pricing and vendors’ premium pricing for long-term agreements has led some operators to look to the spot market.

Both Buffalo Wild Wings and Ruth’s Chris Steak House said they were able to reduce food costs in their latest quarters by purchasing their major food items, chicken wings and beef, respectively, on the spot market.

In March, parent company Buffalo Wild Wings Inc. said it would not contract its chain’s chicken wing prices because the offered fixed prices were much higher than market prices. In its second quarter the move paid off, as the company’s cost for fresh chicken wings totaled $1.17 per pound compared with $1.25 per pound last year. The Minneapolis-based company, which operates or franchises 521 restaurants, said it planned to remain on the open market this year and next.

At Ruth’s Chris, the 100-plusunit steakhouse chain operated or franchised by Heathrow, Fla.-based Ruth’s Hospitality Group Inc., only 25 percent of its beef needs were contracted and the remainder was left to market-price purchases, which are much lower than future fixed prices, the company said. In the second quarter, the move helped reduce food costs by 1 percentage point from a year ago.

Other chains, however, would prefer to contract food items, as it can help them set menu prices for the year based on cost and calculate a margin for each dish—one steady expectation in an unsteady economic environment.

Sonic Corp., which operates or franchises more than 3,400 Sonic drive-ins, has been able to contract its chicken needs, but is currently on a month-to-month contract for beef. The company said it is seeing double-digit year-to-year price increases for beef, and would rather hedge prices by locking in a long-term contract. So far it has been unable to come to agreements with vendors.

“The premium that our suppliers wanted to charge us … did not allow us to lock it in at a price we felt … was viable,” said Stephen Vaughan, Sonic’s chief financial officer, during an analyst conference call in late June. “We would prefer to be locked in, but it has to make sense economically.”

Other operators may soon be in the same position. Famous Dave’s said its chicken contract expires in September and it expects an uptick of 5 percent in costs. Brinker said that in the next three months about 7 percent of its contracts would be up, including those for beef and produce. When the company gets into its fiscal second-quarter, which begins in October, about 34 percent of its contracts will expire.

While many operators said they would focus on making smart purchasing decisions and, as a last resort, would increase menu prices to battle increased costs, some also have mentioned rethinking the cuts of proteins they buy.

Delaware North Cos., a Buffalo, N.Y.-based contract feeder, said it is considering a switch from chicken tenderloins to breast strips at its stadium and arena concession stands across the country. The move would save each venue about $15,000 per year, company officials said.

According to Michael Reinert, Delaware North’s vice president of supply management services, the company’s commodity costs have increased 6.7 percent so far this year. He added that in June alone the price per case of chicken tenderloin rose 7.4 percent over last year’s costs.

“The industry should be concerned because…indicators are all over the place right now, so it’s harder to see what prices will be,” Silvey said. “There are so many pieces to the puzzle. I wouldn’t say I’m worried, but there is uncertainty.”