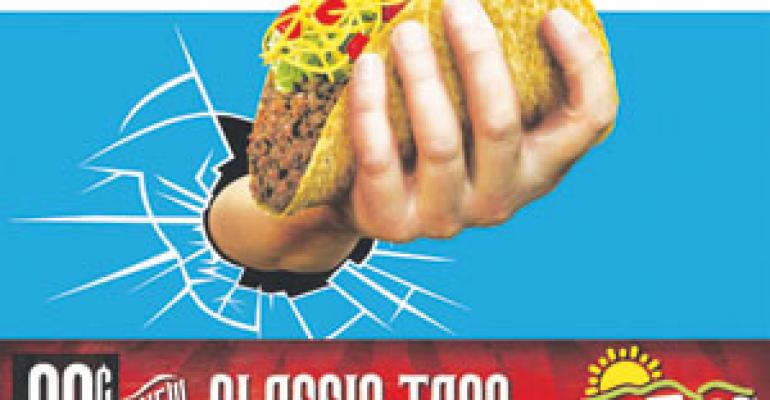 A5-story-tall taco looms over motorists as they travel a busy freeway in Los Angeles, an example of how a few restaurant chains are growing more innovative with outdoor marketing campaigns to generate buzz for their brands.

That taco is a “wallscape” erected by the Mexican-and-burger chain Del Taco to promote its new 99-cent Classic Taco. It’s a bold move for the quick-service chain—it’s never used a wallscape before—but an appropriate one, considering that the outdoor icon is part of Del Taco’s new “Go Bold or Go Home” campaign.

“The wallscape is a perfect visual extension and opportunity to express to consumers in a unique way it is time to step up to a new Classic Taco,” said Sharon Fogg, senior vice president of marketing for the chain, based in Lake Forest, Calif., whose more than 500 units operate in 16 states.

Traditional billboards and transit ads long have been a staple in restaurants’ outdoor efforts, but within the past few years some chains have grown highly creative with billboards and other forms of outdoor advertising.

In 2006, McDonald’s placed a sundial on a billboard in Chicago’s Wrigleyville neighborhood that highlighted various breakfast items as the sun progressed through the sky. This past summer it erected a billboard in the same neighborhood shaped like an egg, which opened slowly around dawn to promote breakfast. It also used a billboard to promote its salad line, with the words “Fresh Salads” spelled out in lettuce that actually grew while the billboard was in place.

In September, Arby’s did a one-day billboard campaign in Atlanta that didn’t involve any of its own billboards. It “hijacked” existing billboards that showed people’s faces, and floated helium balloons above them shaped like the “I’m Thinking Arby’s” thought balloon in the chain’s commercials.

“These special one-offs are great in high-profile locations,” he said.

The executions don’t have to be confined to a billboard, as Papa John’s Pizza showed this summer while promoting a new whole-wheat crust. Just before the Democratic convention in Denver, the chain hired an artist to create a crop circle, shaped like a giant pepperoni pizza, in a field near Denver International Airport. The crop circle was visible to passengers.

When KFC launched a revamped logo in 2006, it placed an 87,000-square-foot replica of it, constructed with tiles, in a Nevada desert and proclaimed it the first corporate logo visible from space.

Del Taco’s decision to go with the giant wallscape fit the strategy behind the “Go Bold” campaign, Fogg said, adding, “We think it fits very well with the idea of taking bold action and delivering on Del Taco’s bold reputation.”

Other elements of the campaign are a viral food fight, theater advertising, radio promotions and bus ads that say, “Don’t Drool & Drive.” The wallscape will be in place until mid-November, visible to northbound drivers on the 405 Freeway as they approach the 10 Freeway.

Fogg said nearby Del Tacos are seeing a bump in their guest traffic.

“It was huge, much bigger than we expected,” she said.

The balloons were in place during the evening rush hour on Sept. 18 to get people to think about eating dinner at Arby’s, she said.

The hijacking was also a hot topic the next morning on Atlanta radio talk shows, Jones said.

To generate even more publicity, the agency shot photos of the billboards and balloons and placed them online on numerous social-media sites, available to consumers worldwide.

“What would have been just a publicity stunt became a global event,” Jones said.

Bloggers also admired the hijacking stunt. AdBlog wrote, “This is smart, engaging and gets the message out in a broad way at limited expense.”

Based on the success of the initial effort, Fletcher Martin is looking to hijack billboards in other markets, Jones said.