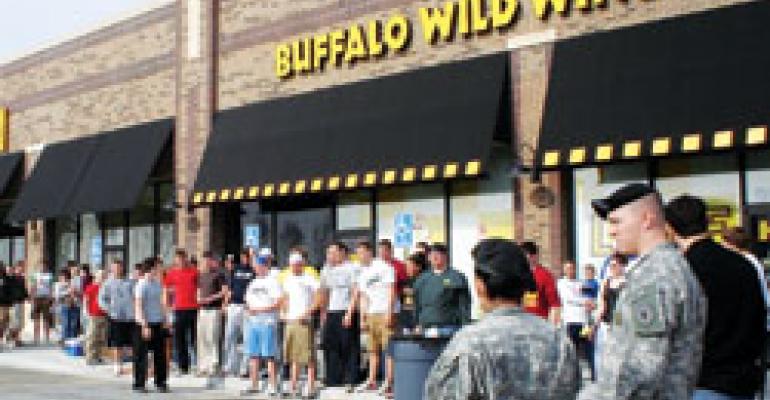 Brad Laughner of Buffalo Wild Wings knew the brand had hit on something good when he recently saw a woman camped out in front of a soon-to-open store near Kansas City, Mo., in the middle of the night.

She was waiting with about 100 other people to be first in line for the next morning’s grand opening, in order to win free wings for a year, while she was working remotely, watching three different laptops. She was routing commuter trains.

“Those kinds of stories tell you that you’re doing something fun,” said Laughner, the casual-dining chain’s director of new restaurant openings.

As the recession lingers, restaurant companies such as Buffalo Wild Wings have played up their free-food offerings as a way to build traffic and goodwill among spending-shy consumers. But to reap long-lasting benefits from such promotions, operators need to deliver new experiences along with free food, marketing experts say.

“Overall, these programs are good,” said Tim Hackbardt, principal of marketing firm The White Barn Group. “Where you see them fail is where the brand just gives something away and that’s it. The menu hasn’t changed, and there’s no new impact.”

So even though Denny’s Grand Slam Breakfast giveaways this year involved the chain’s signature item, lapsed customers who returned to Denny’s for the free food saw a refurbished concept with new interiors and a late-night menu, Hackbardt said. Spaghetti Warehouse’s July 29 “National Lasagne Day” offer used an online coupon to show off the chain’s new presence on social-media sites.

The reasons operators sponsor giveaways vary widely. Some use them to celebrate a brand anniversary, as Culver’s did for its 25th and A&W for its 90th. Others tout new menu items with complimentary samples, as McDonald’s recently did with its McCafé Mocha Mondays and KFC did to promote its Kentucky Grilled Chicken.

Several chains have adopted the giveaway-for-grand-opening strategy long employed by Chick-fil-A or California Tortilla, as Buffalo Wild Wings did for the opening of its 600th location July 20 and Einstein Bros. Bagels did for the first time July 24.

Minneapolis-based Buffalo Wild Wings has offered a year’s worth of wings to each location’s first 100 customers since 2005. The offer gets people camping out the night before and generates a tailgate atmosphere that carries over into a packed opening, Laughner said.

“With free wings, you open the door and you’re hammered out of the chute,” he said. “Everything the team has trained for is engaged immediately. We absolutely get better performances and retention out of our team members.… The other benefit we get is 100 loyal customers right out of the chute. They tell their friends; they don’t come by themselves.”

The free-wings deal, a booklet of coupons for six free wings per week, costs the chain about $300 per customer, Laughner said, and the preopening events include costs for security, portable toilets and food. But the resulting publicity and goodwill quickly recoup the losses, he added.

“We have a cult following now with it, and we’d never want to get away from it,” he said. “It fits our brand so nicely. In a new market, it embeds our culture very quickly.”

Giveaways always have been around, said The White Barn Group’s Hackbardt, but the traffic-driving tactic has proliferated because the recession has caused major cutbacks in restaurant visits.

“It really is much more competitive now to get people’s attention,” Hackbardt said. “If this continues at this pace and expansion, the brands are going to have to up the ante to make it interesting.”

Some companies already are.

Lakewood, Colo.-based Einstein Bros. Bagels made its biggest investment for a store opening with its First 100 Breakfast Giveaway at the July 24 grand opening of a unit in College Park, Md. Not only did Einstein Bros. offer one free breakfast sandwich a week to the first 100 people in the door, but it also delivered coupons to 20,000 residents and workers in the area for different one-time offers.

Chief concept officer James O’Reilly said restaurants no longer have the luxury of a soft opening.

“We view the opening period as the most important for driving trial,” O’Reilly said. “The reason for this program is to create a lot of buzz and excitement around that specific day.”

Once the customers come in and try the freshly prepared food and see the new interiors, O’Reilly added, they hopefully will become longtime fans.

Einstein Bros. will evaluate whether to do another giveaway based the success of the College Park opening, and while many chains show no sign of ending their free-food offers, Hackbardt thinks the widespread giveaway activity likely will ebb as consumer confidence returns and brands close locations with weak unit economics.

Still, as long as customers remain nervous about the economy, chains have a shot at successfully pulling off giveaways.

“There’s a statistic lying around somewhere,” Hackbardt said, “that at the grand opening, 80 percent of consumers in your trade area try your restaurant within its first two weeks. This is your shot.”— [email protected]