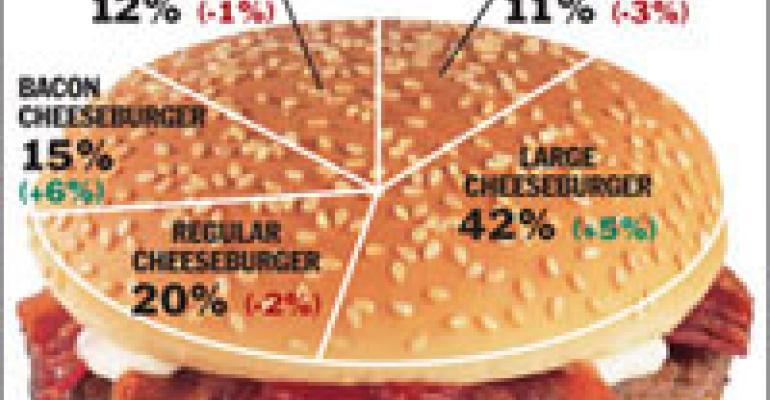 Burgers boom even as consumers rein in restaurant spending

If there’s one item every restaurant should put on the menu during these challenging economic times, it is the classic American hamburger, say those who have watched the power of the patty grow even as consumers rein in restaurant spending.

Though foodservice traffic has been slow for sometime, advancing a mere 1 percent in the year ended in March, hamburgers have made strong incremental servings gains and are appearing on more menus, according to new data from market research firms The NPD Group and Datassential.

“Preference for burgers is not going away,” said NPD analyst Bonnie Riggs. “It’s a product that has a very broad appeal.”

Hamburgers made up 14 percent of all restaurant orders in 2007, which equates to 8.7 billion servings, NPD found. In the year ended in March, total hamburger servings increased 2 percent over the year earlier.

More restaurants are realizing the power of having a burger on their menu, Datassential found. Forty-four percent of all restaurants—from quick service to fine dining—have a burger of some kind on their menus, an increase of 7 percent from two years ago. All segments have contributed to the product’s growth, according to Datassential.

Growth of the large cheeseburger is being driven by the double cheeseburgers available on many quick-service value menus, noted Riggs.

Despite many chefs’ efforts to reinvent the classic burger by using premium meats, adding exotic or more flavorful toppings and sauces, or using artisanal breads, the basic burger still rules.

When it comes to burger patties, ground beef is still the favorite choice, but upgraded meats such as Angus and Kobe are being menued more frequently, Datassential found. Angus burgers have experienced double-digit menu growth over the past two years. Though they account for a small percent of burgers overall, Kobe burgers are experiencing growth at casual- and fine-dining restaurants. Nontraditional burger patties, like soy, salmon and chicken, are also finding their way onto more menus.

Cheddar, Swiss and American are still the cheeses most often melted on top of a burger. Of all restaurants that offer a burger, 32 percent are menued with Cheddar, 30 percent with Swiss and 25 percent with American cheese, according to Datassential. Other cheeses that frequently top burgers include Jack, blue, mozzarella, provolone, pepper Jack, Monterey, Parmesan and Gorgonzola. The biggest growth is coming from Jack, blue, pepper Jack and Parmesan, which have all experienced double-digit growth.

The No. 1 ingredient menued on a burger is onion, followed by bacon, lettuce and tomato, according to Datassential. Fifty-four percent of all burgers are menued with onion, 49 percent with bacon, 48 percent with lettuce and 45 percent with tomato. However, some slightly bolder toppings, including peppers, veggies and jalapeños, have been making their way onto burgers more frequently. These ingredients all recently experienced double-digit growth.

Perhaps a throwback to times when a burger was thought of as a poor man’s steak, the No. 1 sauce on a burger isn’t ketchup, but BBQ sauce. Not only do 18 percent of all burgers feature BBQ sauce, appearance of the condiment is up nearly 10 percent, according to Datassential. Mayonnaise and dressing round out the top three sauces most often served on burgers. Other sauces appearing on menus more frequently include blue cheese and jalapeño. While only 4 percent of all burgers feature ketchup, that number is increasing. Burgers topped with the salty, tomato-based sauce grew 15 percent. Jalapeño grew 19 percent and blue cheese, 12 percent.

No matter what’s on top of them, most burgers are served on a bun. Of all restaurants that offer a burger, 21 percent are menued on a bun. Rye is the next most popular bread, followed by the roll. The fastest-growing burger breads are rye, bread and wheat, all of which experienced double-digit growth. The traditional bun is also increasingly competing with artisanal breads like brioche, ciabatta and multigrain, according to Datassential.

Traditionally consumed at lunch or dinner, burgers are increasingly being eaten in between meals as snacks, appetizers or at the morning meal, NPD found.

“We want burgers for breakfast, snack, we want mini burgers,” Riggs said. “The opportunities are endless.”

Consumers’ growing desire for burgers as an appetizer or snack could come from the increasing number of menus that now feature mini burgers, also called sliders. Since last year, mini burgers have grown 16 percent on menus, according to Datassential. Though that increase is mainly coming from casual-dining and bar-and-grill chains, quick-service players such as Burger King and Hardee’s, have also recently added minis to their menus. Price could be a driving factor as well, since minis typically cost considerably less than their bigger counterparts. At casual-dining restaurants, burgers cost, on average, $7.16, while mini burgers cost about $6, Datassential found.

The appeal of the burger even in tough times is tied to its countless possibilities, say some industry experts.

“Consumers are looking for greater value, premium brands, bold flavors,” Riggs said. “Burgers are a product that lend themselves to a great deal of innovation.”

Other experts, however, think simplicity and value are the keys to the burger’s universal appeal.

“[The hamburger] really took off during The Depression … [it] allows even the poorest, the thriftiest to enjoy eating beef,” said Josh Ozersky, New York magazine’s Grub Street blogger and author of the newly released book “The Hamburger: A History.” “The very last thing Americans will do in difficult circumstances is stop eating hamburgers,” he said.

The exotic ingredients topping burgers these days are merely “grotesque aberrations” to a purist such as Ozersky.

“The hamburger has a primary simplicity,” he said. “Restaurants should sell more [basic] hamburgers.”

“When we opened four years ago, we decided not to do the gourmet burger,” said Randy Garutti, Shake Shack managing partner. “We think what people really want is a simple, high-quality burger.”

With sit-down-style burgers priced at just $4.75 for a single and $7.25 for a double, affordability may also be a draw for Shake Shack’s customers. Lines of burger lovers often stretch through the park, and on its busiest days Garutti says the Shack serves nearly 1,000 burgers. Garutti said a second, larger Shack is slated to open on the Upper West Side by the end of the year. Shake Shack is owned by Union Square Hospitality Group in New York.

Even some large chains are committed to the basic burger. At Lorton, Va.-based Five Guys Burgers and Fries, a rapidly expanding quick-service chain with 300 units, burgers and fries are just about the only thing on the menu.

“[The hamburger] has always been considered a good deal,” said Jerry Murrell, president of Five Guys. “It’s like a meal.”

The two most popular burgers at Five Guys are the regular cheeseburger and the bacon cheeseburger made with fresh ground beef.