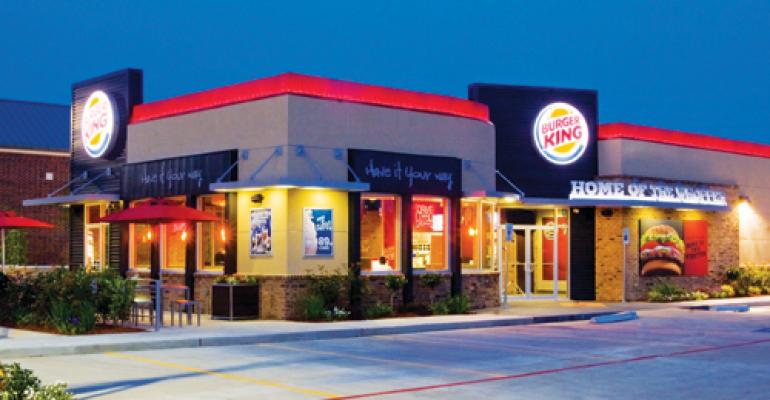 Burger King Holdings Inc. plans to continue emphasizing its “barbell” strategy of promoting both value and premium menu items and said it remains optimistic that the September rollout of its new breakfast menu will help increase traffic and sales.

Burger King executives expanded on these strategies Tuesday during a conference call with analysts after releasing fourth-quarter financial results that reflected ongoing challenges in its U.S. business.

The nation's No. 2 burger chain recorded fourth-quarter net income of $49.0 million, or 36 cents per share, down 16.8 percent from year-ago profit of $58.9 million, or 43 cents per share. Revenue slipped 1.1 percent to $623.0 million as global same-store sales declined 0.7 percent, which  included a 1.5-percent drop in the United States and Canada. Click here for more on Burger King's latest results.

Highlights from the call:

Burger King said it would continue to offset value items with higher-priced premium products, like the Fire-Grilled Ribs and Steakhouse XT Burger.

Ben Wells, Burger King’s chief financial officer, said the company saw “reignited sales through our barbell menu strategy of affordable and premium offerings, specifically during the quarter we realized positive traffic across all dayparts in our U.S. company restaurants."

Burger King kitchens continue to be outfitted with the new batch broilers, which allowed for the bone-in Flamed-Grill Ribs promotion and are now in 71 percent of the system, compared with 55 percent a year ago. The new broilers allow for a wider range of premium products, which at combo price points of $8 to $9 have boosted check averages, Burger King said.

“Many of our guests opted to buy the larger rib pack size, helping to sequentially increase average check in the U.S. over third quarter's average check,” Chidsey said. “The over 10 million ribs sold demonstrated that guests are willing to pay higher price points for compelling, innovative products.

Wells said Burger King is also employing the barbell strategy at breakfast, with a $1 breakfast muffin at the low end and the BK Breakfast Bowls on the premium end.

Burger King said it would launch its new breakfast menu in September.

“The test results for the breakfast products that we are rolling out were very good,” said Mike Kappitt, chief marketing officer for Burger King North America.

While Burger King has yet to detail the new breakfast platform, some locations of the chain were testing a "brunch" menu this spring that included a ciabatta breakfast sandwich and a non-alcoholic mimosa made with orange juice and Sprite.

Burger King said it expected fiscal 2011 to remain difficult, though it did not offer earnings guidance, citing uncertainties with the economy.

Same-store sales are starting to lap the traffic boosts of last year’s Dollar Double Cheeseburger launch, which was rolled out over late summer and went systemwide Oct. 19.

“It’s a high hurdle for us to climb the next couple of months,” Chidsey said.

“There are definitely regional differences out there,” said Chidsey. “The West Coast -- California in particular -- continues to be a very challenging environment. You can kind of look at where unemployment continues to be very high, and that tracks very closely: Michigan, parts of the Midwest, which continue be a struggle.”